Seven years ago, Srey Pich was toiling in the garbage dump earning a couple dollars a day. After being found by Cambodian Children’s Fund, the 17 year old is now on her way to graduation after missing years of schooling. The difference in her life is incredible, and part of that improvement can be attributed to her sponsor: Tony Hawk. The legendary skateboarder began sponsoring Srey Pich soon after she joined CCF in 2007. They had talked via Skype in the past, but they met for the first time in November. Srey is incredibly shy, and she was quiet – yet happy - when they first met. Later that day Tony Hawk took her shopping and she came out of her shell for the special day. The next day, she met Tony at Skateistan Cambodia, an NGO dedicated to using skateboarding as a way to empower young people. All of a sudden, Tony put Srey on a skateboard and rode around with her. It was first time on a skateboard and she loved it. The photo below says it all. Just like Tony has done, you can also make an enormous impact on a child’s life with our sponsorship program. 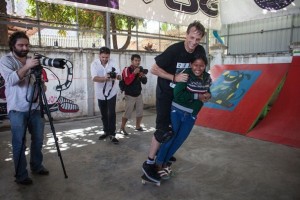