The Sumner M. Redstone Charitable Foundation has announced a grant of $700,000 to the Cambodian Children's Fund (CCF), to provide a wide range of critical health and educational services to impoverished and abused children in Cambodia's capital city of Phnom Penh. This most recent gift brings Mr. Redstone’s total commitment to CCF to $3.4 million.Scott Neeson, the founder and executive director of CCF, said, “Mr. Redstone’s most recent donation provides a cornerstone for CCF. We have a long-term mission to provide essential care and a quality education to the most impoverished children in Cambodia. The generosity of Mr. Redstone ensures we fulfill that promise. He is truly an inspiration and I’m humbled by the consistency of his support." Mr. Redstone said, “Cambodian Children’s Fund not only provides some of the most destitute children of Cambodia with a comprehensive education, but goes even further, providing the essentials of shelter and nutritional meals that are necessary for learning to take place. As a longtime supporter of CCF, I have been so inspired by the accomplishments of these children, and am proud to strengthen and sustain programming which helps thousands of children, their families, and the entire community build a better life.” Cambodian Children’s Fund transforms the lives of some of Cambodia’s most at-risk children by providing them with a home, education, clean water, nutrition, health care and community support. The Sumner M. Redstone Center cares for children of all ages and includes a nursery for children under three who are recovering from malnutrition, illness or live in high risk situations; a day care center for three to six year-olds, many from impoverished and seriously disadvantaged domestic situations; and an education center with classes for children from age six through sixteen, who have no other education opportunities. The Center also houses a food program for the surrounding community children and a medical clinic. Mr. Redstone’s latest donation will allow CCF to address the critical needs of over 1,600 children and more than 3,000 families served by CCF’s facilities. About The Sumner M. Redstone Charitable Foundation From medical research to education to efforts to aid the poor and impoverished around the world, the Sumner M. Redstone Charitable Foundation seeks to advance aims that align with Sumner Redstone’s lifelong commitment to innovation, empowerment and progress. Mr. Redstone has contributed over $150 million to worthy charities around the world over the last several years. Recent gifts have funded new state-of-the-art facilities at the USC School of Cinematic Arts and Boston University School of Law, supported the Global Poverty Project towards eradicating polio and established the Cambodian Children’s Fund child rescue center, along with research and patient care advancements in cancer, burn recovery and mental health at several major non-profit healthcare organizations. The Foundation will continue to seek out and support organizations in the United States and abroad that share Mr. Redstone’s vision for a better world. For more information on the Sumner M. Redstone Charitable Foundation and Mr. Redstone’s philanthropic efforts, please visit www.sumnermredstonefoundation.org. About The Cambodian Children’s Fund The Cambodian Children's Fund was founded in 2004 by Scott Neeson to aid children living on the site of Phnom Penh’s garbage dump at Steung Meanchey. CCF's Phnom Penh facility was initially established as a safe house for Cambodia's orphaned, abandoned or abused children, providing secure shelter and nutritional meals within a caring environment. Since then, CCF has grown to include full education, medical care, vocational training and community outreach services for Cambodia's most impoverished children and their families. With six facilities now operating, CCF's programs now include maternal care, clean water, a food program, a nursery for the most at-risk newborns and infants, a day care center, a garment training facility and a bakery. CCF also provides a comprehensive educational program for over 1,400 children, including local language reading and writing, multi-level English classes, social studies and math. The Cambodian Children's Fund received the 2012 Wise Award for innovation in education, the first organization in the region to win such a prize 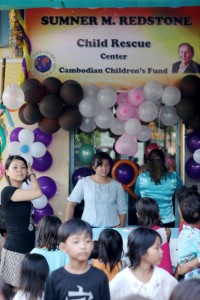