When Julian Johnson died, he asked his family to support the work of Cambodian Children’s Fund. His mother Barbara Boxhall made the emotional journey to Phnom Penh to see her son’s wish fulfilled.

The green plaque on a wall at the entrance to the school library reads: “In honour of Julian for his commitment to the care and safety of Cambodian children.”

Standing next to the sign, in the late afternoon sunshine, is Barbara Boxhall, holding a framed photograph of Julian, her son, a handsome young man with kind, brown eyes, and a warm smile.

In a moment, she will step through the doorway into the library and see the result of Julian’s legacy. 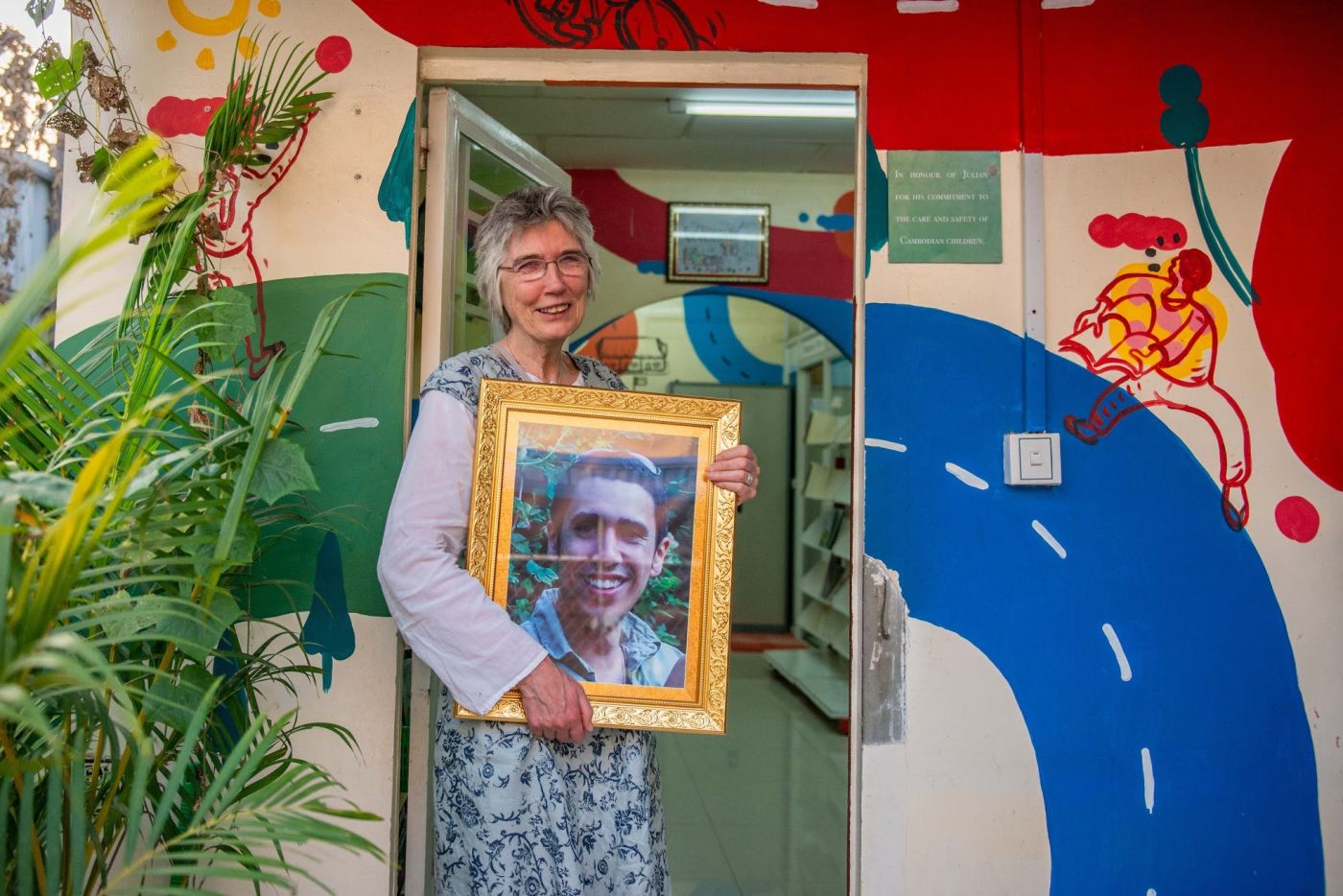 People who visit Cambodian Children’s Fund do so for many different reasons, motivated by varying purposes, but linked by a common aim to see the work that is being done to turn around the lives of children and families in one of the most deprived parts of Cambodia.

For Barbara Boxhall, the 10,000km trip from her home in the UK to Phnom Penh meant more than most. It was a deeply personal, and painful, journey, to see that her son Julian’s last wishes were fulfilled.

Julian, her only child, took his own life in August 2017 at the age of 36 after a long struggle with both mental and physical illness. In a letter he left for his mother, he asked her to make a donation to CCF to help protect children, a subject very close to his heart after his own childhood difficulties. 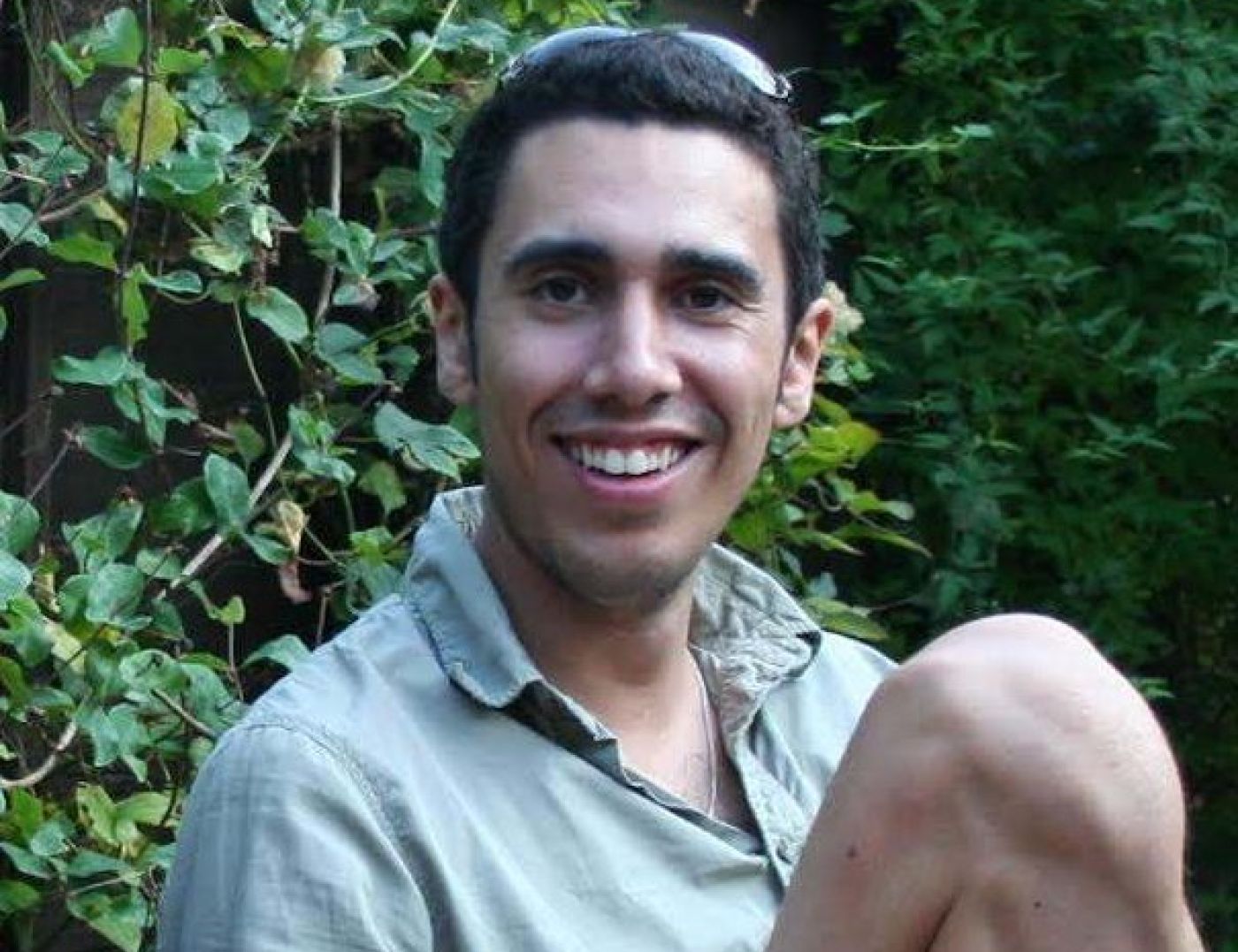 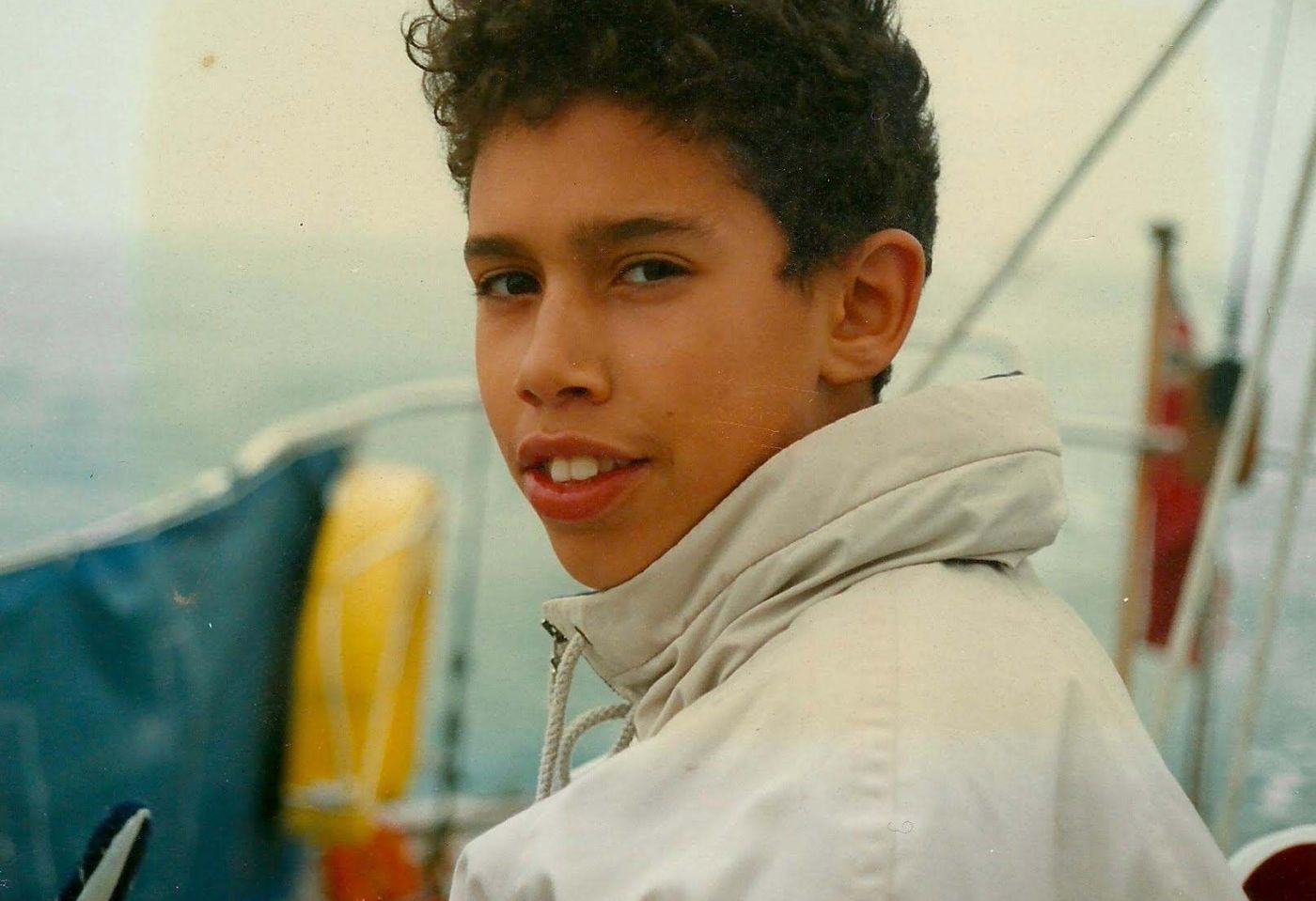 “In his letter to me, which we found, he asked if we could give some money to Cambodian Children’s Fund because he felt that children need protection,” says Barbara.

Julian had first come across CCF and founder Scott Neeson on the internet a year or so before. He was, says his mother, always looking for inspirational people to give him hope with his own struggles and she remembers him telling her about “this amazing guy” working with children in Cambodia.

After Julian’s death, CCF organised a Buddhist ceremony 100 days after his passing. Barbara was unable to attend but watched a video of the moving event.

Barbara carried out her son’s wish. Thanks to Julian, a new library was built at CCF’s Prek Toil satellite school in his memory, replacing a cramped tiny area with a larger safe space where children can study, relax and read the new selection of books that the donation also bought. 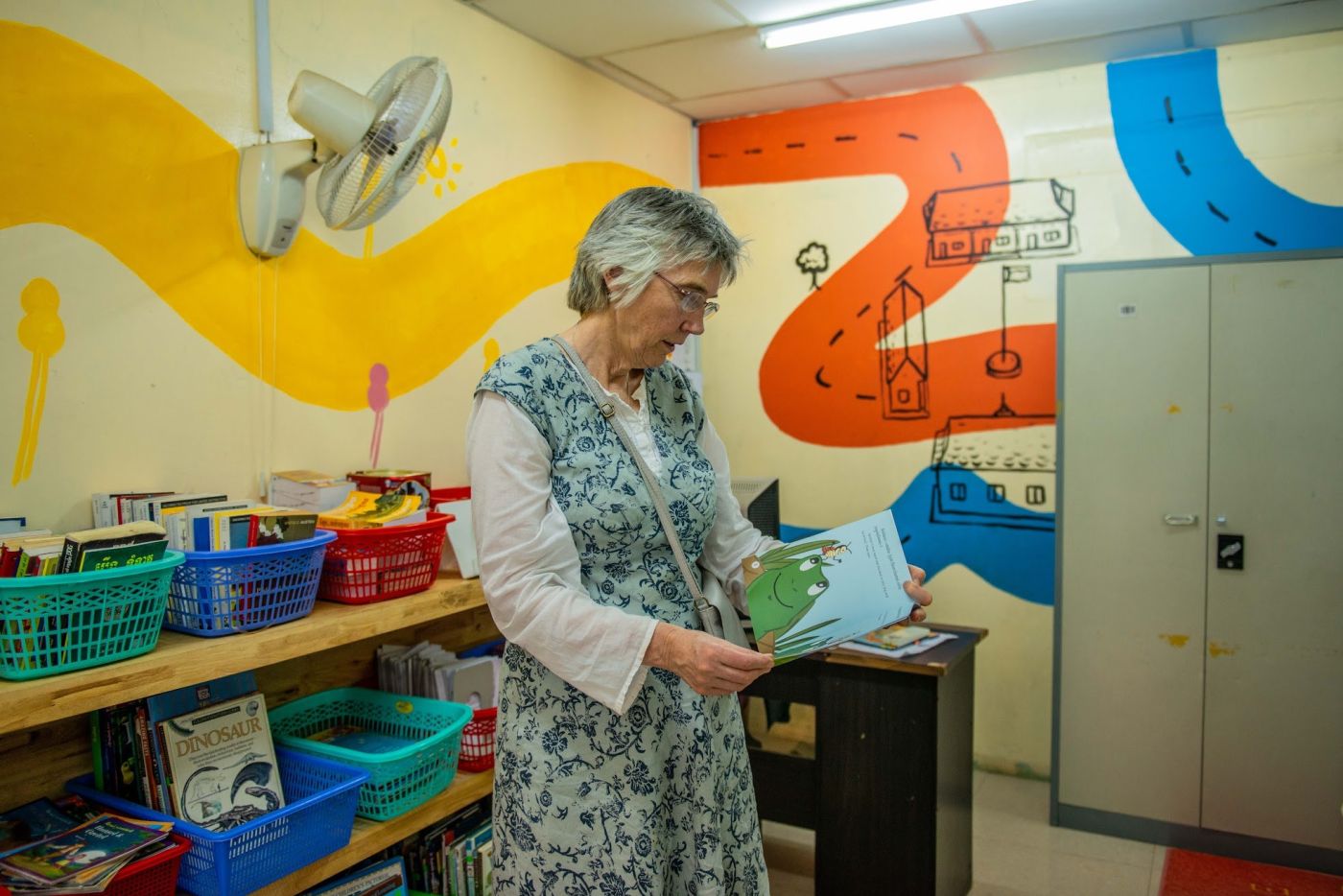 Earlier this year, Barbara made the trip to Cambodia and CCF for the first time to visit the library that Julian built. She was accompanied by her sister, Ingrid, who as Julian’s aunt, also wanted to see what his wish had achieved.

Barbara has had to overcome tremendous difficulties to reach that point. Shortly after Julian died, her husband became ill and died six months later. Barbara herself was diagnosed with breast cancer and needed surgery and treatment.

Being hit by such an emotional tidal wave would floor most. And while it has taken its toll on her, Barbara’s resilience, inner strength and absolute determination to do right by her son has driven her forward.

Being able to see with her own eyes what Julian has given CCF, through his wish, is a ray of light in what has mostly been a dark world since Julian’s loss. 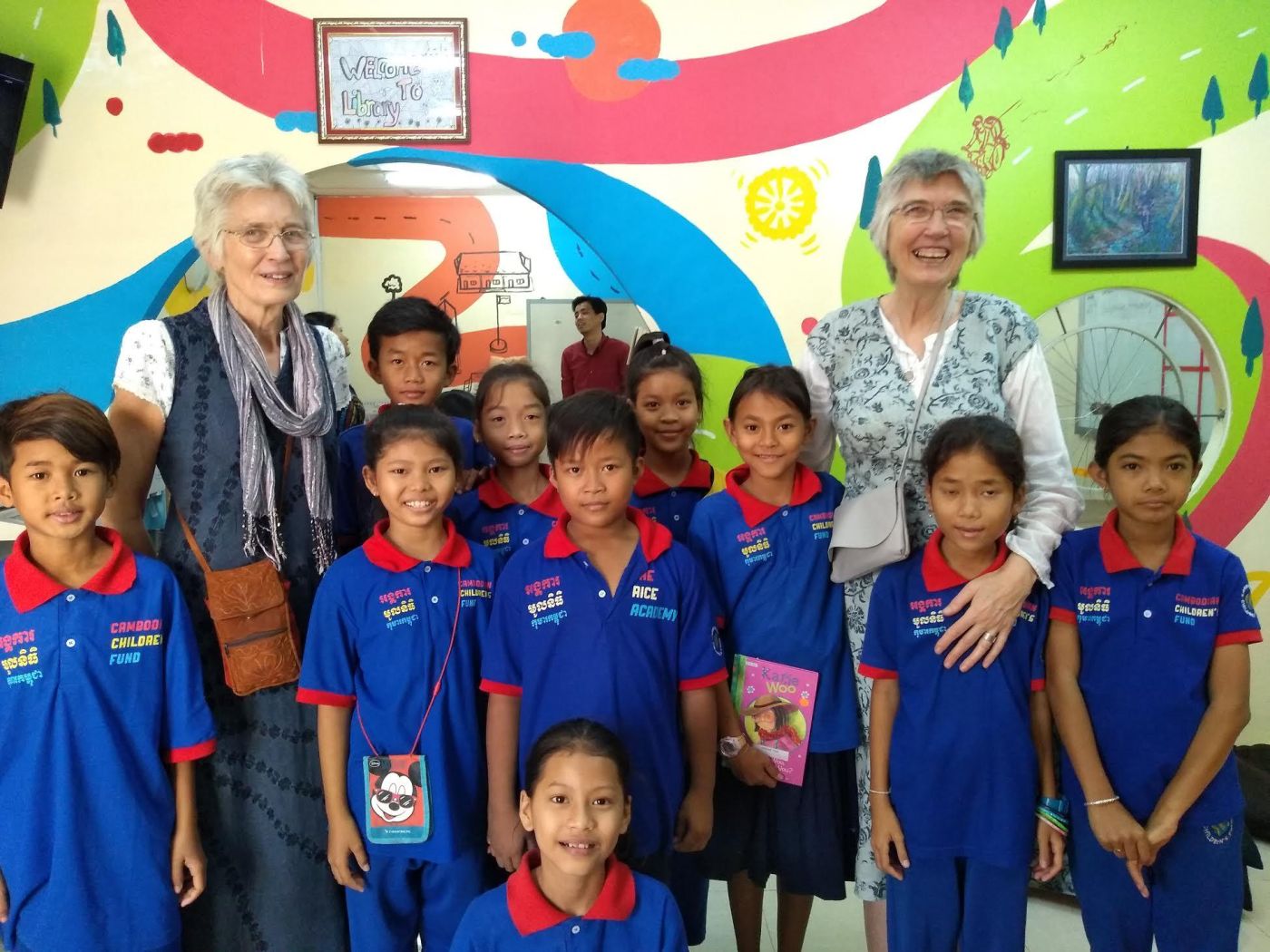 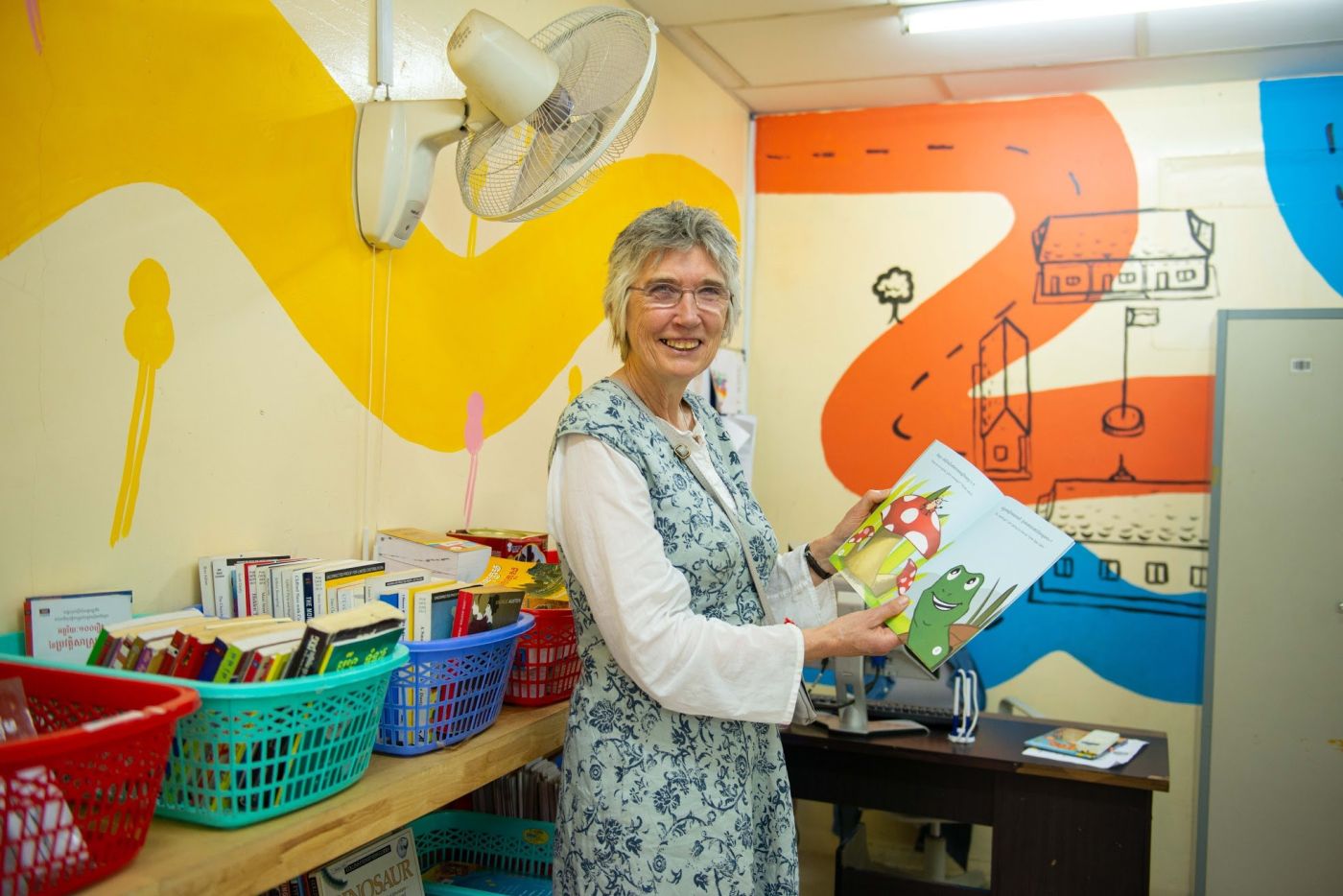 There are splashes of colour on the new school library walls, little touches of Julian and of things that he loved, such as nature and exploring. Catching the eye is a photograph of a painting, of vivid blues, framed in black, shows a cyclist riding through a wood carpeted with autumnal leaves and what look like bluebells, dancing in the breeze.

The original painting was done by a friend of Barbara’s. Julian loved mountain biking. Now a copy of it will hang in the library, above a bicycle wheel which has been set in the wall too.

“This is now an absolutely marvellous space for the children,” says Barbara. “Now, I have seen the wonderful work that goes on here.

“I haven’t got the words to say how I admire what’s going on here [at CCF], it’s absolutely fantastic. The scope of it and the thought that goes into every aspect of the childrens’ lives, so that they can be supported to grow and flourish and thrive in the way that they need to. I am just in awe of it.”

Wandering around the library, it’s clear that Barbara feels her son’s presence in the legacy that he has left. 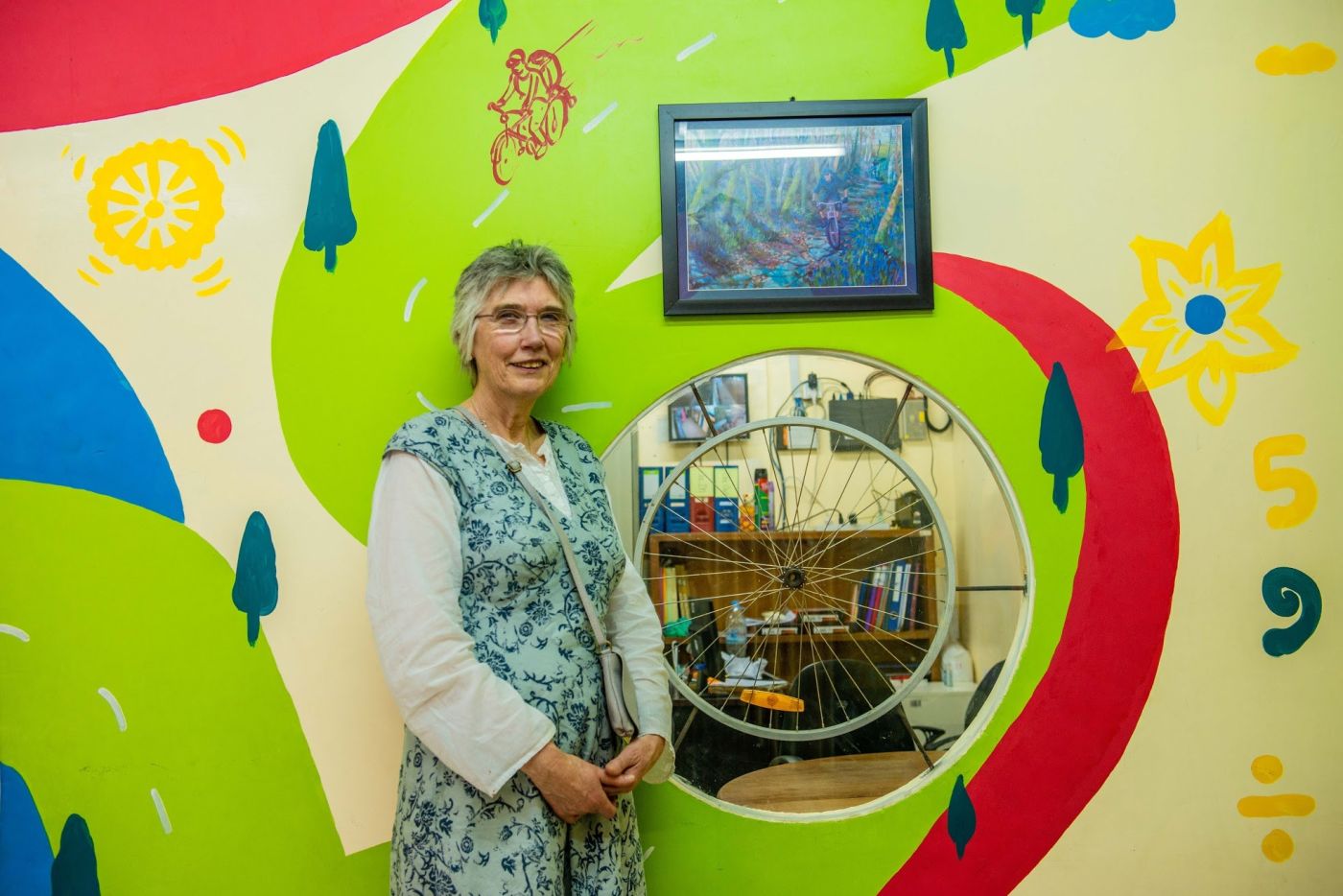 “That Julian is part of it is so meaningful for me, I can’t tell you how meaningful it is” she says.

“I am so pleased to have fulfilled what he wanted when he took his own life.”

Talking about Julian is emotional and Barbara begins to cry.

“I’m bound to get upset coming here, I knew I would. I was dreading that but you know, it’s really important that I came,” she says.

She smiles as she describes what her son was like.

“He was so tall and so handsome, and he had such a softly spoken voice.

“We had a close bond. He was a very bright person, very sociable and easy with people, very capable and a deep thinker, but he developed all sorts of problems - physical and mental problems. His illness became too great, so he took his own life.”

What does she think Julian would have made of the library project and CCF?

He would be so pleased. Because of his own personal experience, when he was small and apart from me, he so wanted children to be protected and he heard that this [CCF] was very much about protecting children, about helping them to flourish and thrive, and do well in their whole lives. So it was a big issue for him, and he would be absolutely thrilled.

Barbara, who has been a Counsellor for 25 years and also teaches Mindfulness and Mindful Self-Compassion, has an aura of calmness. She is as gentle and softly-spoken as she described her son.

Visiting Cambodia, CCF and the library, has been part of the healing process, a search for peace, on what will be her own personal journey to come to terms with the loss of Julian.

“It affected me so strongly, his death. Taking his own life, that was so devastating”, says Barbara.

“I only wanted to die when he died, nothing else, but my sister, Ingrid, she saved my life and I’m really grateful to her. So I live for her and my family. And also ongoingly, hopefully if I have strength, to help [CCF}.”

While in the library, Barbara took some photographs, which she then intends to print and incorporate in a patchwork quilt that she is making in Julian’s memory to sit on his bed.

“I can patch the printed fabric photos into the quilt. It will be like a continuation from his past to his death and carrying on his legacy, which is really nice. Hopefully that’s another process that will help me,” she says.

During the visit, Barbara and her sister had a tour of all CCF facilities and joined the nightly Food Program. The dust, heat, noise and traffic of Phnom Penh, and the deprivation in Steung Meanchey where CCF works, is a long way from their home in the peaceful countryside of England. 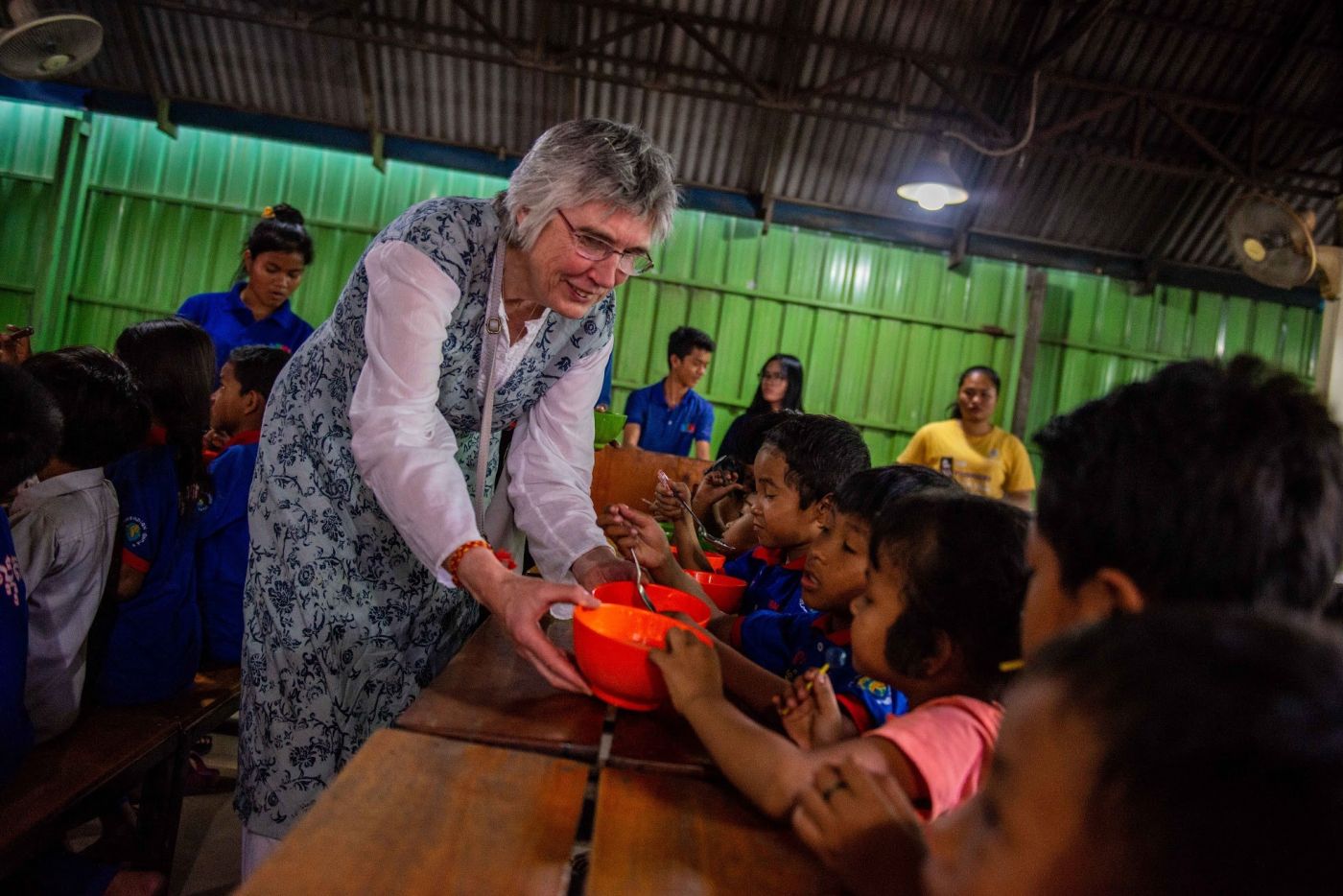 But, like many visitors to CCF, they found common ground, shared experiences, with those in the community helped by CCF.

“We met the most lovely granny (Granny Rin),” says Barbara. “She was crying with us because I imagine that she lost children herself. She’s such a fine woman, so tender and strong, a great combination. To meet her was very special. I would come back to Cambodia just to see her.”

Barbara’s faith - both she and her sister are Buddhists, as are many in her family - also helps to sustain her belief that something good can come out of what has happened. 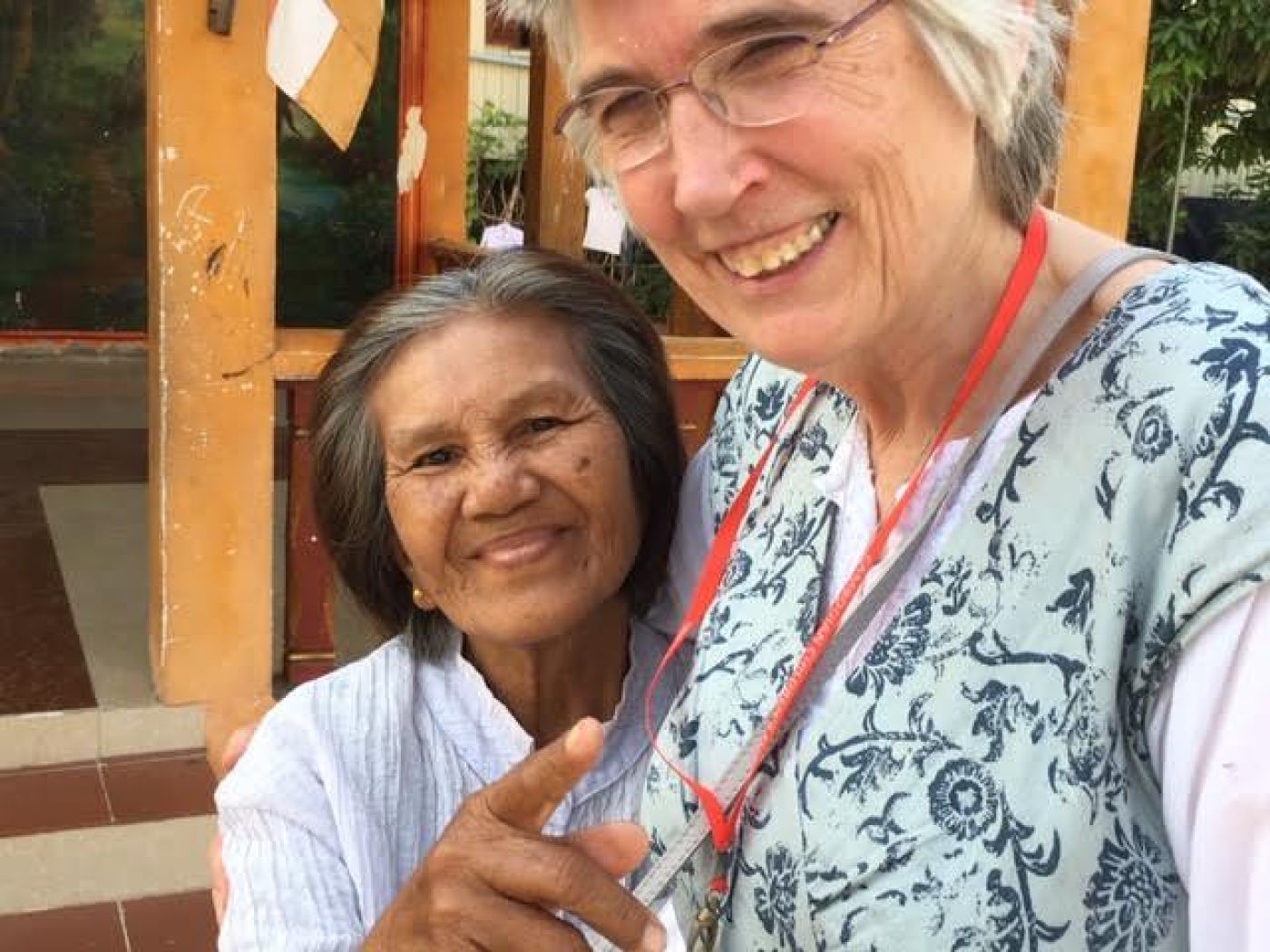 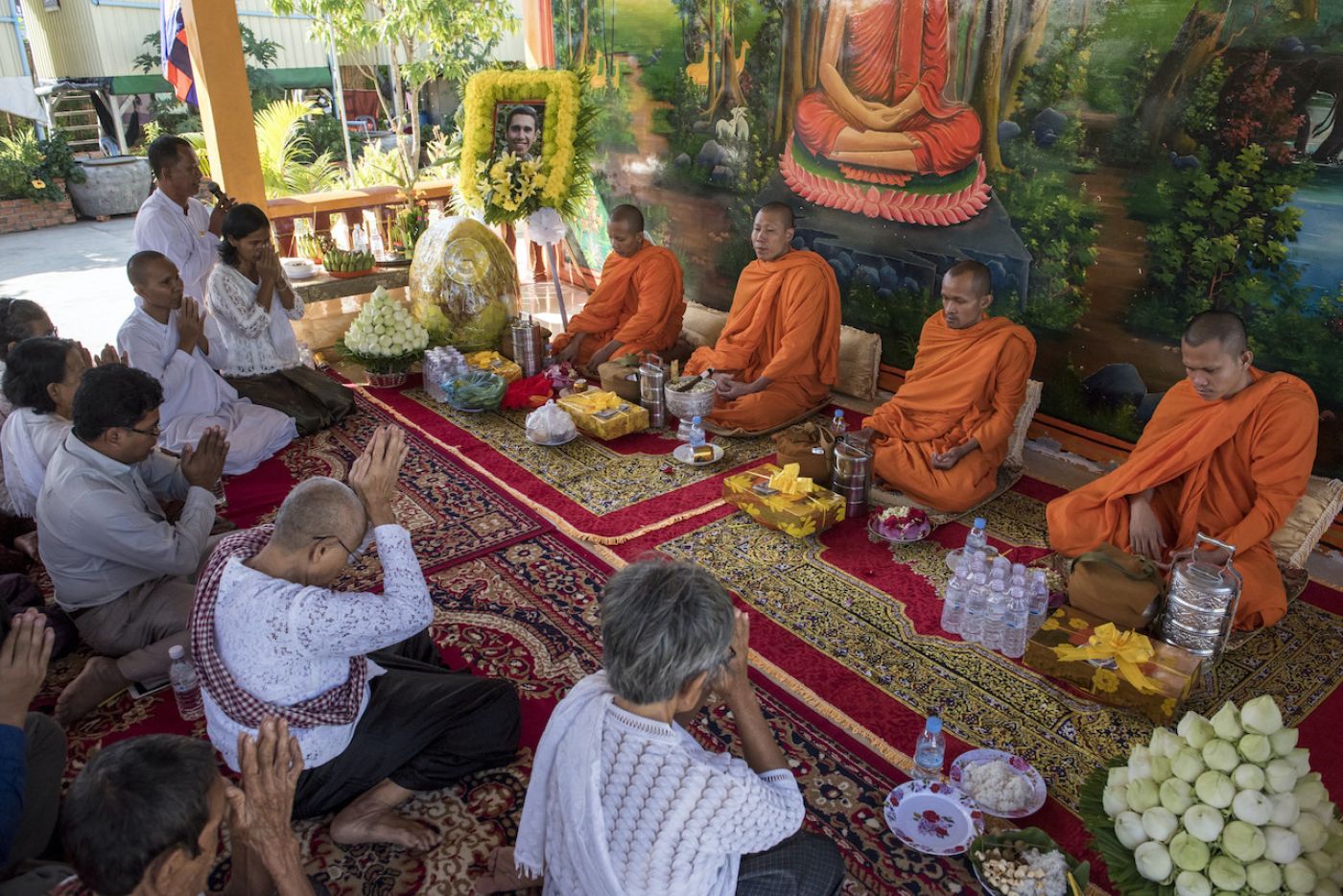 While she has not been able to work due to suffering from chronic fatigue since losing her son - a condition which also affects her ability to travel - she is determined to maintain the link with CCF that has started from Julian.

“I don’t know how I will continue to support CCF, I don’t know whether it will be from me personally coming here or how, I don’t know but it’s certainly going to be an ongoing thing in my heart and in my intentions. Perhaps, eventually through teaching Mindful Self Compassion for those with broken hearts here in Cambodia,” says Barbara.

“It has been marvellous being here. Seeing the library, meeting the children, the grannies, the blessing and the love. This is a wonderful experience for me.”

And as her son Julian wished, his memory and kindness will live on in the hundreds of children who will use the school library space for years to come, discovering the joy of reading books. The green sign at the entrance will remind visitors of who made it all happen.

That will be Julian’s legacy - and one that his mother can be proud of.