Heather Graham, famous for her roles in films like "Boogie Nights" and "Lost in Space," and a devoted supporter of CCF recently appeared on NBC's Today program talking about her role in the just-launched movie "Judy Moody and the Not Bum¬mer Sum¬mer" in a lively interview during which she shared her passion for CCF and its work with the viewers. You can watch Heather's interview here; http://www.msnbc.msn.com/id/26184891/vp/43237401#43237401 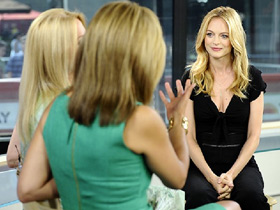