Sol Phearum joined CCF as a child. 15 years later, he’s now repaying the care he received by becoming a monthly regular giver to help more children like him.

A new monthly donation to CCF for $2.50 was recently set up, accompanied with a message simply saying ‘Thanks Dad!’

These were words of gratitude to CCF’s founder, Scott Neeson, known as ‘Papa Scott’ by many CCF students, who see him as the figure often lacking in their young lives.

And the new donor is former CCF student, Sol Phearum, who first joined CCF when he was seven years old.

More than 15 years later, Phearum, now 22, is living independently and working full-time as a photographer, with a promising future - and a wish to give back. 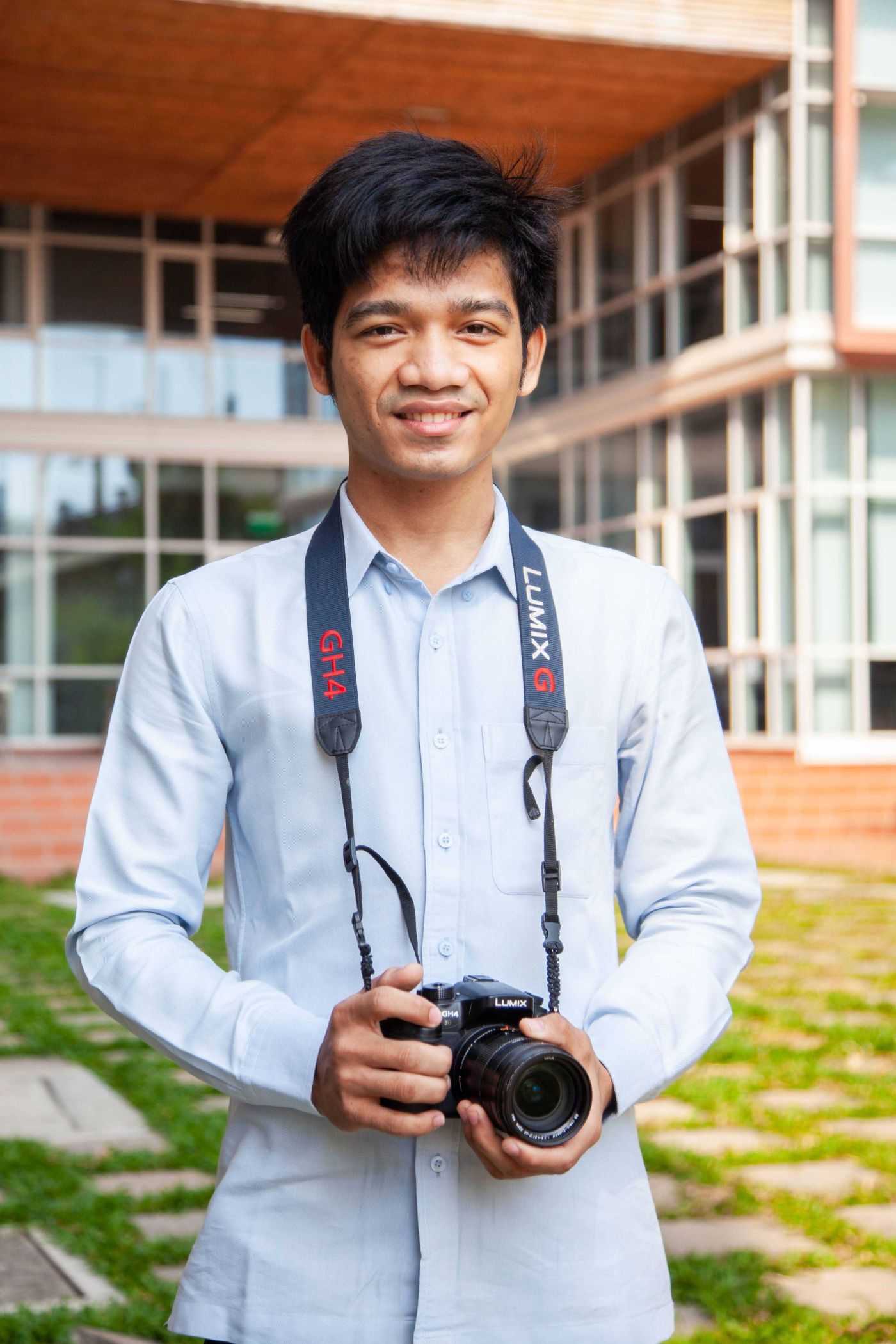 With a regular income Phearum is in a position to contributing back and helping others, in the way that he was.

The monthly donation to CCF is his way of repaying for all the love and care that he was shown.

“This is the way I can help CCF the way CCF helped me,” says Phearum.

“I think it’s important that we all give back if we can. We have to be the ones to help others.”

The significance of the donation was not the amount - although to Phearum it’s the most he can spare from his modest monthly salary - but what it represents.

It symbolizes his CCF journey coming full cycle. From a vulnerable child in need of support, to a young adult living by his own means, now able to give back and help other children in the same situation that he once was.

Phearum’s story is not only heartwarming but unequivocal proof that CCF’s model and long-term sustainability vision works; those who are helped in turn give back to help others in their community and country.

While Phearum has other success to his name - such as getting into university - being able to donate to CCF and pay back for the faith shown in him, is the achievement that makes him most proud, he says.

“We [young Cambodians] need to do our part to help those who have less. It is good for the future of Cambodia too,” says Phearum.

“I don’t have my own family yet, so I can help CCF by donating.” 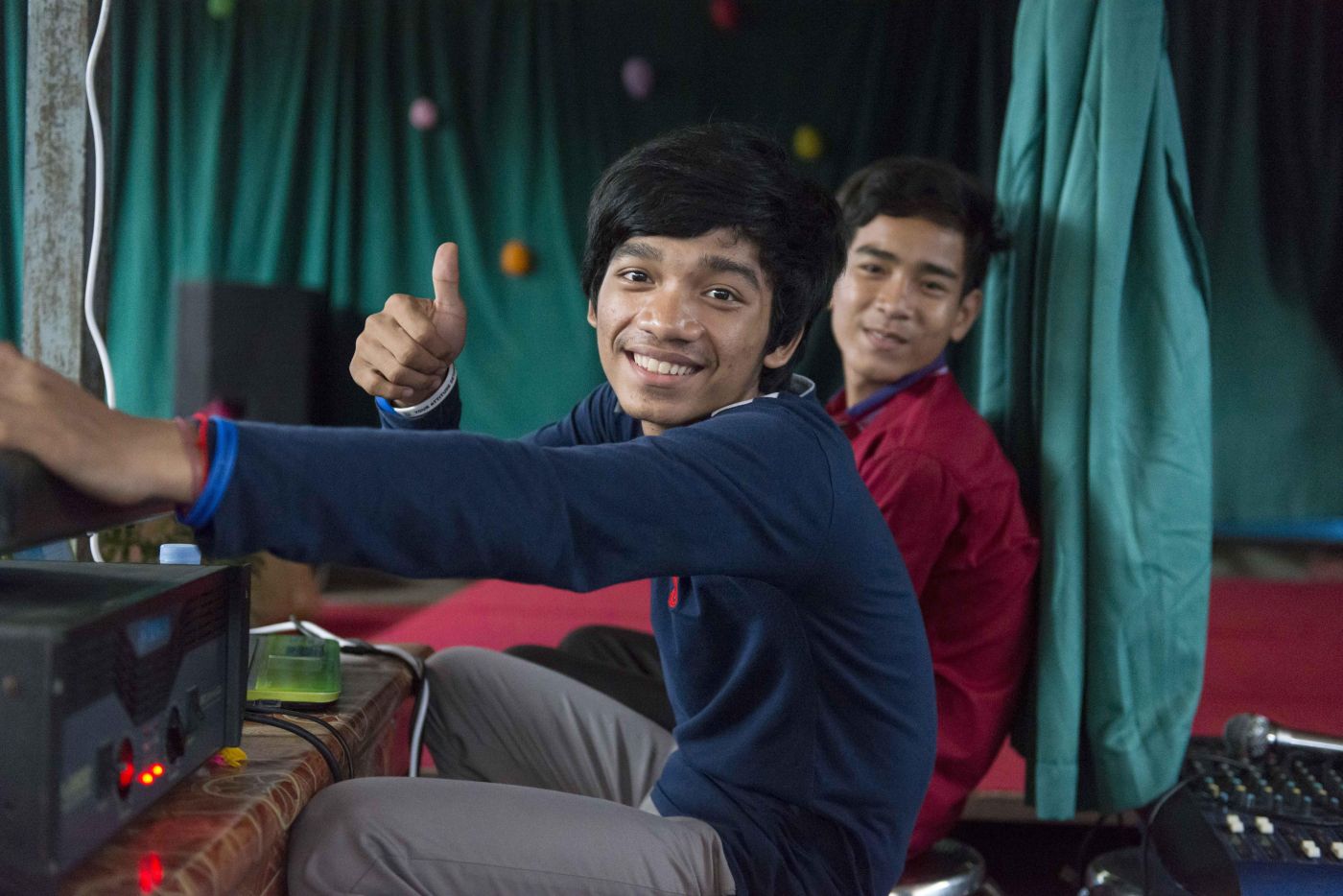 “I recall first meeting Phearum atop the terrible Steung Meanchey landfill,” says Scott Neeson about the first time that he set eyes on Phearum.

Phearum was one of thousands of children who found themselves on the once notorious Steung Meanchey garbage dump - the largest landfill in Southeast Asia at the time and one of the most toxic environments - some abandoned, some making their own way there, others arriving with their families desperate to earn money from scavenging amid the rubbish.

Phearum’s dad had been left widowed with four children and it was a struggle to get by on his earnings as a moto taxi driver.

Phearum does not remember his mother, who passed away when he was very young. His father died in 2014.

Below Sol Phearum with CCF Founder, Scott Neeson, in 2017. 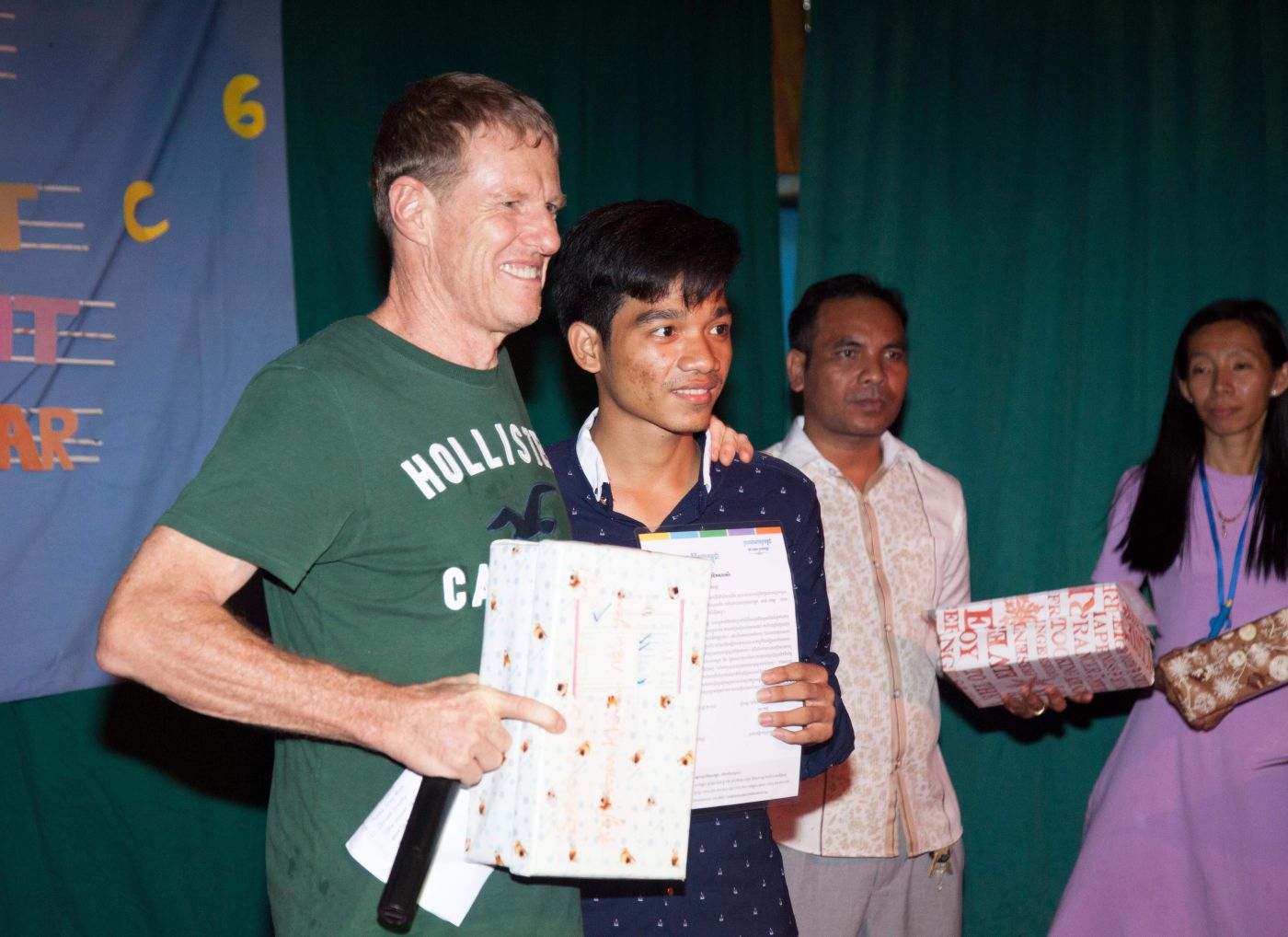 “I remember joining CCF and then, you can say, my life started,” says Phearum, pictured second right, at CCF in 2013. 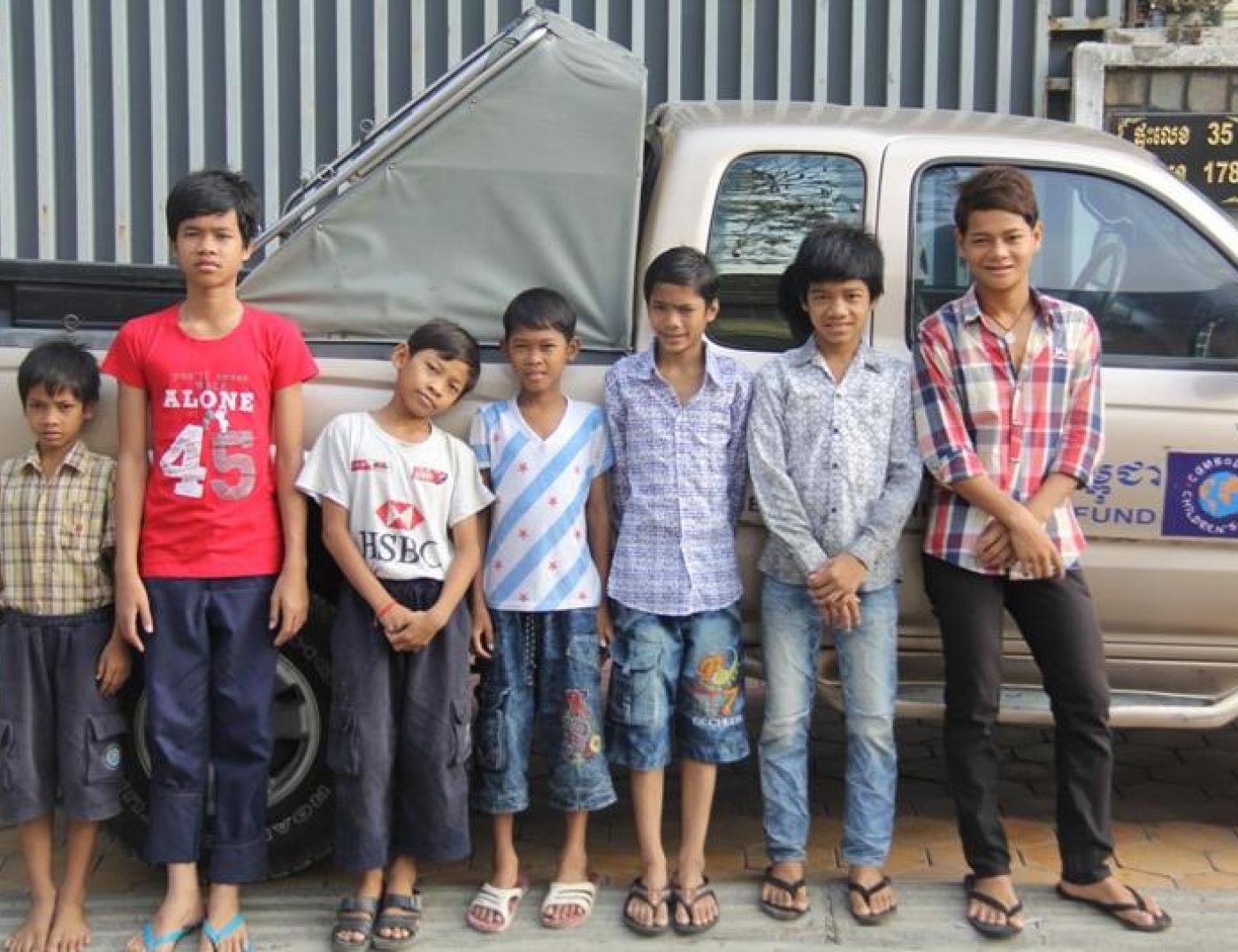 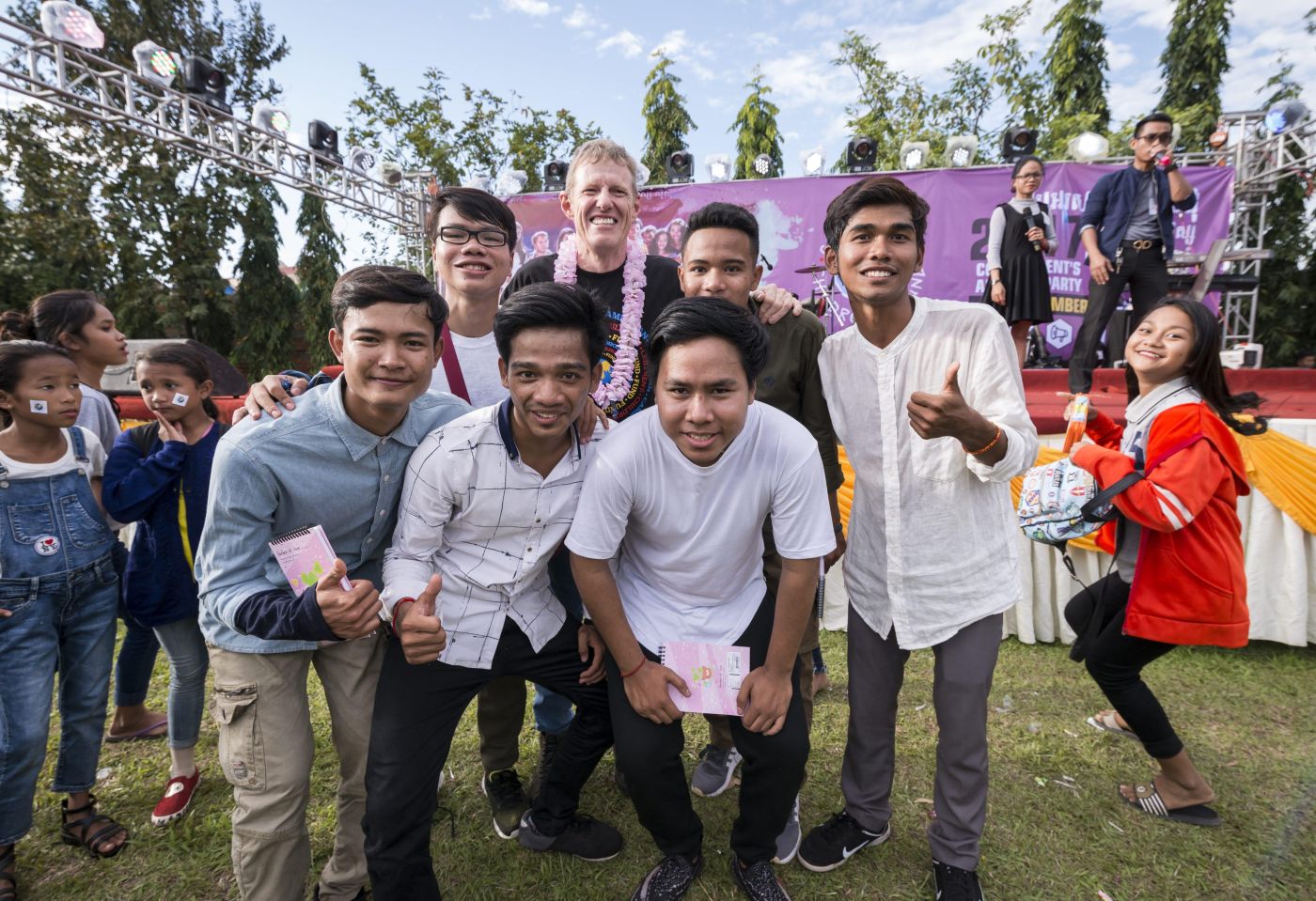 “CCF became my family. Everything that I have known and that I have learned is from CCF.” Phearum, bottom row second left, with other CCF students and Scott Neeson in 2017.

Phearum also had the backing of his long-term sponsor, Kevin Goetz, through CCF’s Child Sponsorship Program, offering encouragement and support over the years.

Kevin, who is American, began sponsoring Phearum in June 2005. Having someone consistently present in his life was hugely important for Phearum, who had little contact from his own family.

“When I was young, I was really happy to have Kevin [as a sponsor]. He supported me and gave me advice, celebrated my birthday and kept in touch with me. He looked after me, I really appreciated it,” says Phearum.

“After my father passed away, he talked to me about it and he helped me. I didn’t really know my father, our relationship was not close. I asked Kevin if I could call him father and he said yes.”

I cannot express in words, just how proud I am of my son, Phearum

This relationship, and steady influence, helped guide Phearum’s personal growth and provide a moral compass. Through his own words and actions as a sponsor, Kevin was able to teach Phearum about compassion and the value of giving back.

The two are still in touch. And Kevin was so moved by Phearum’s decision to give back to CCF, that he has pledged a $7,000 donation to CCF and is asking other supporters to match it with their own donations to double the gift.

“I cannot express in words, just how proud I am of my son, Phearum. I have tried to empower him over the many years we have been in each other’s lives to always show great empathy, live in gratitude and give back to others in need,” says Kevin.

“The fact that Phearum has grown into the young man that he is today, who actually lives these principles in his daily life, gives me great pride and respect for my son.”

Kevin also emailed Phearum to tell him how proud he was of his actions.

“I wrote back to him and said I don’t care how much I donate, I care about how many people or children it will help. That’s what it means to me,” says Phearum. 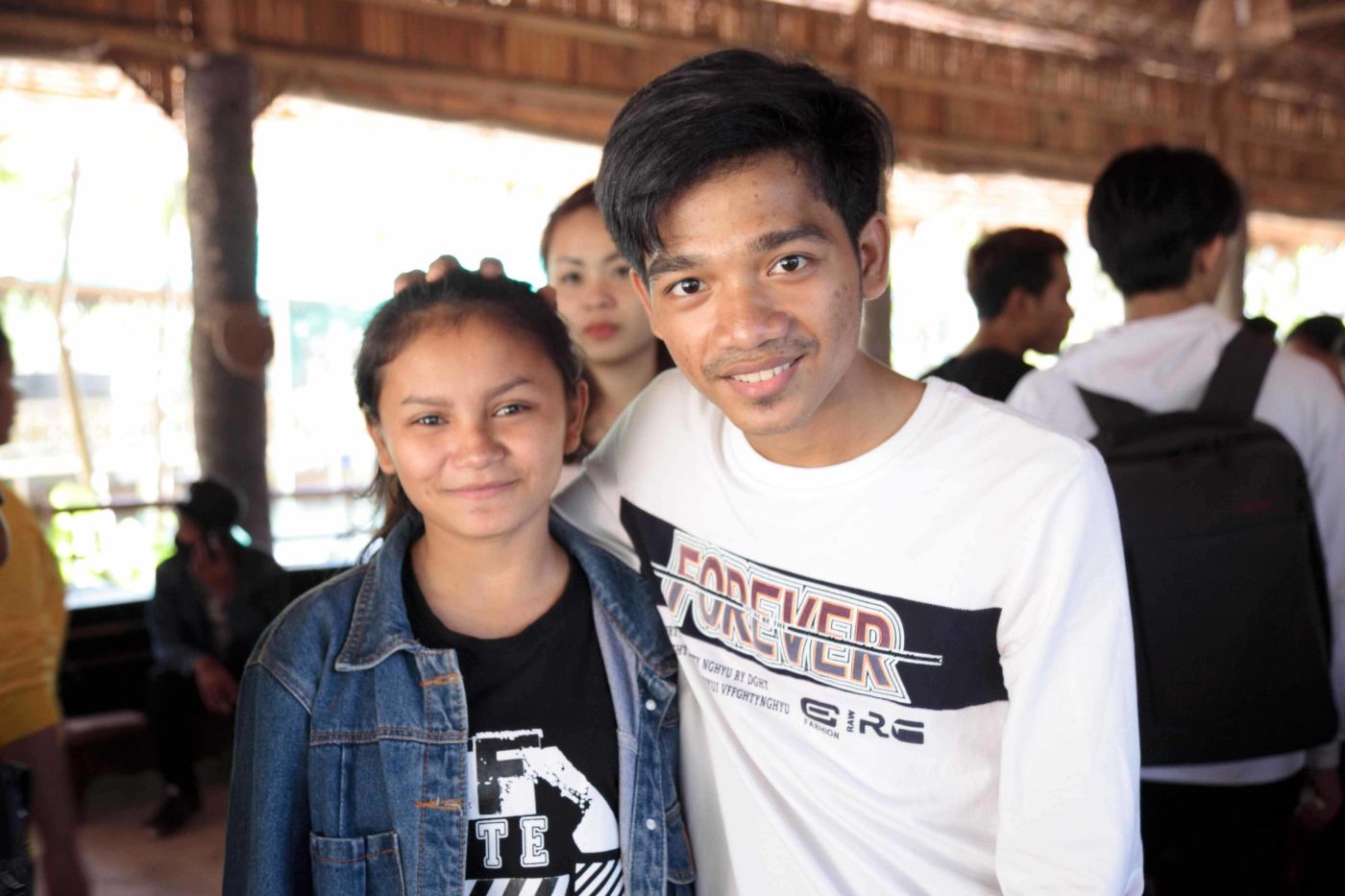 With the mentorship of Kevin and support of CCF, Phearum did well academically and was accepted onto a Networking degree course at Norton University in Phnom Penh. He’s recently put his studies on hold due to family problems but hopes to restart his university studies again in the future.

In the meantime, he’s working as a photographer, mostly covering weddings, and is taking online courses to study his craft, while living with a friend in Phnom Penh.

His other great love is music - he plays keyboard and guitar - and performed at CCF’s Annual Party in 2017 (pictured on the keyboard). 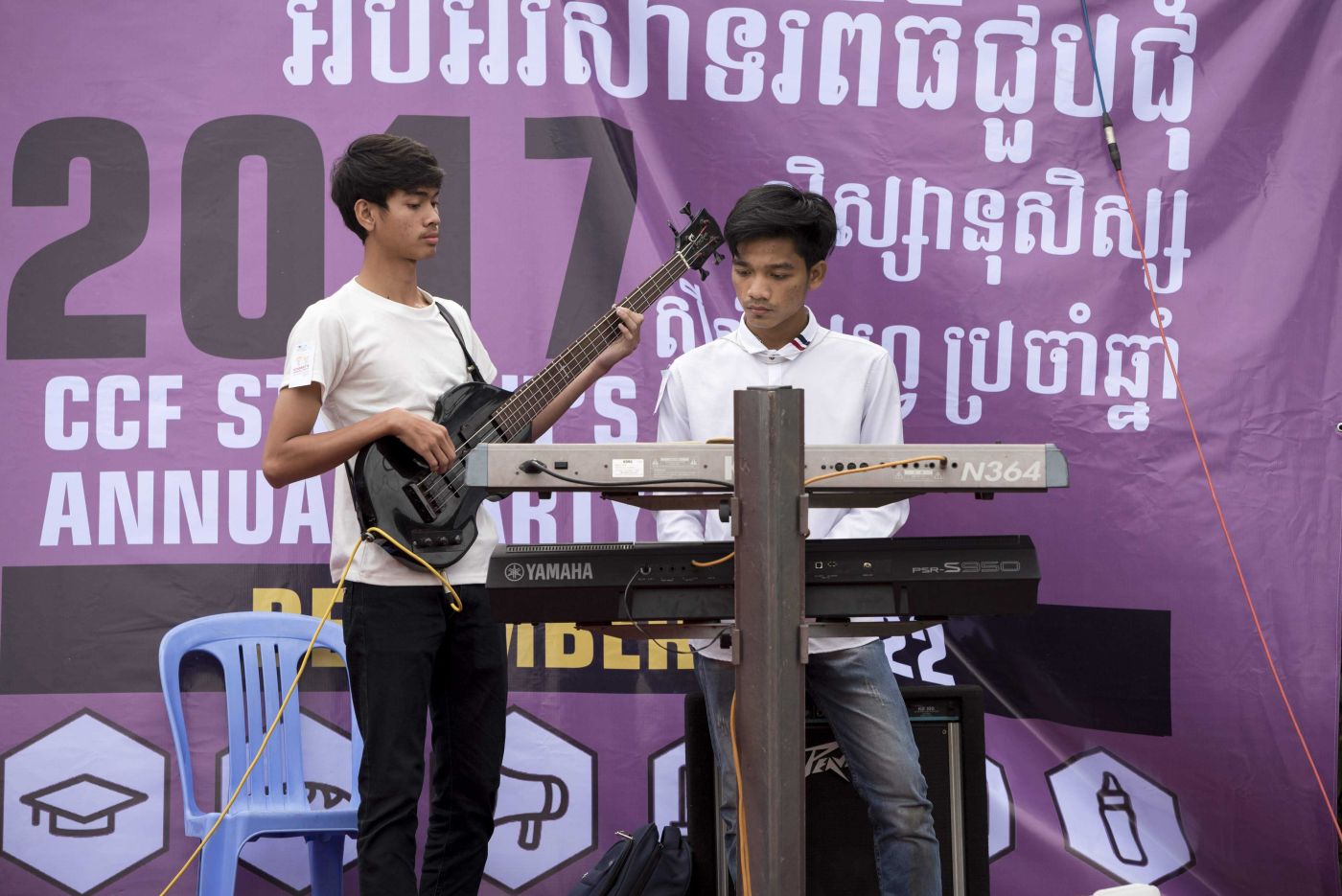 I don’t have much but if I can give from what I have, maybe it can help a little.

Phearum’s motivation to give back is simple: he wants to help others less fortunate and sees it as a moral choice.

“I don’t like to think of someone being sick or poor or hungry,” he says.

“If somebody needs my charity, I will help. When I ride a moto, I see people on the side of the road in need [begging].

“I don’t have much, I’m just starting out step-by-step, but if I can give from what I have, maybe it can help a little.”

Phearum also donates a little amount to a United Nations World Food Programme (WFP) initiative that provides aid and food to countries in crisis around the world.

That he is now giving back to Cambodian Children's Fund is both a source of pride and inspiration.

Phearum is in contact with his brother and two sisters, who all have their own families.

He talks proudly of how he received an email from Scott Neeson after his first regular giving monthly donation to CCF was received.

“He wrote that he was overjoyed to see my donation to CCF had come in and it was a wonderful gesture,” says Phearum.

“That made me very happy.”

Scott Neeson expressed how proud he was of the young man that Phearum has become.

“Phearum had every reason to fail but he seized the opportunity to study. And he studied hard, showed compassion throughout his childhood, and grew his interests to include music, the arts, and technology,” said Scott.

“That he is now giving back to Cambodian Children’s Fund is both a source of pride and inspiration.” 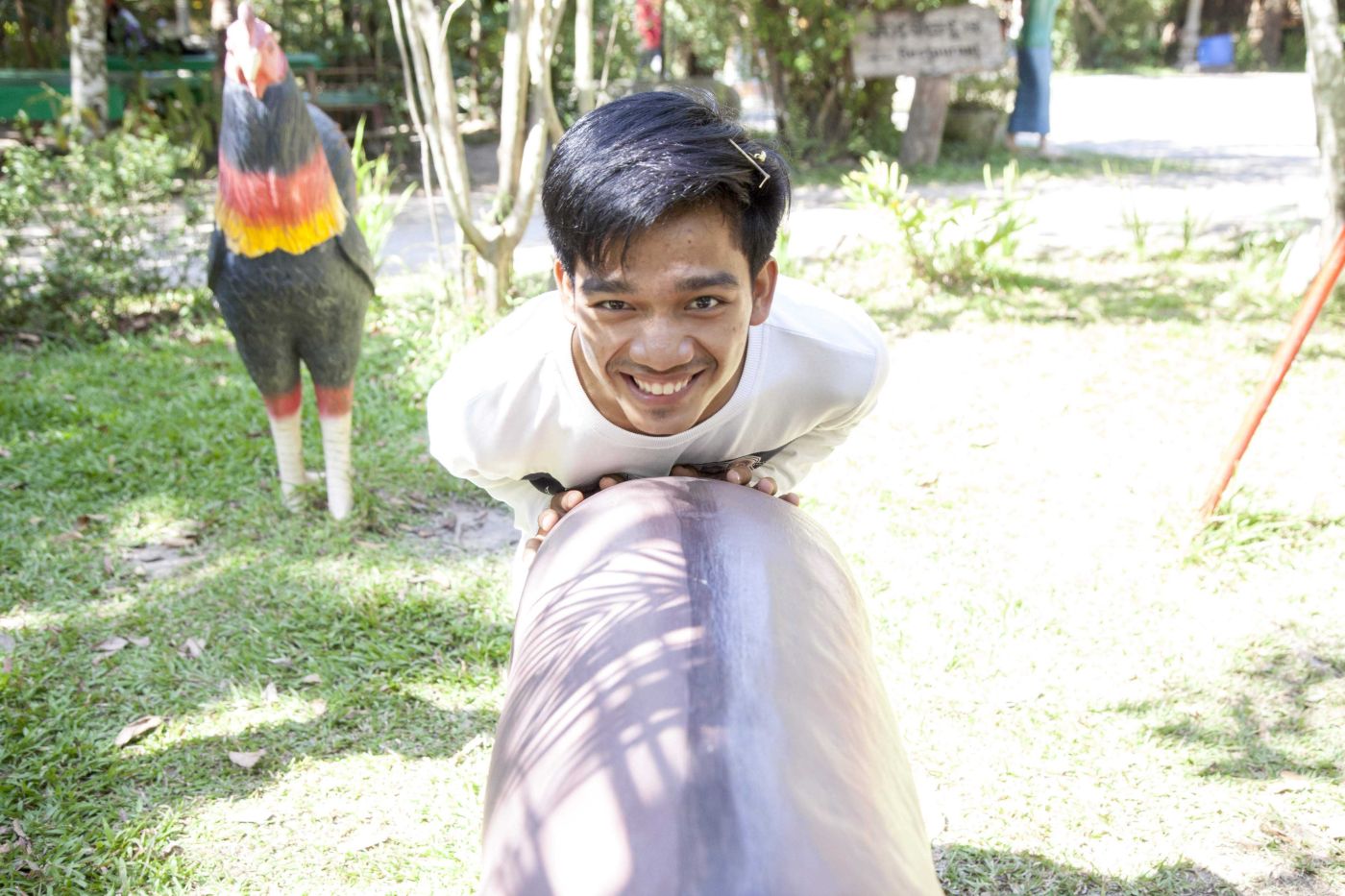 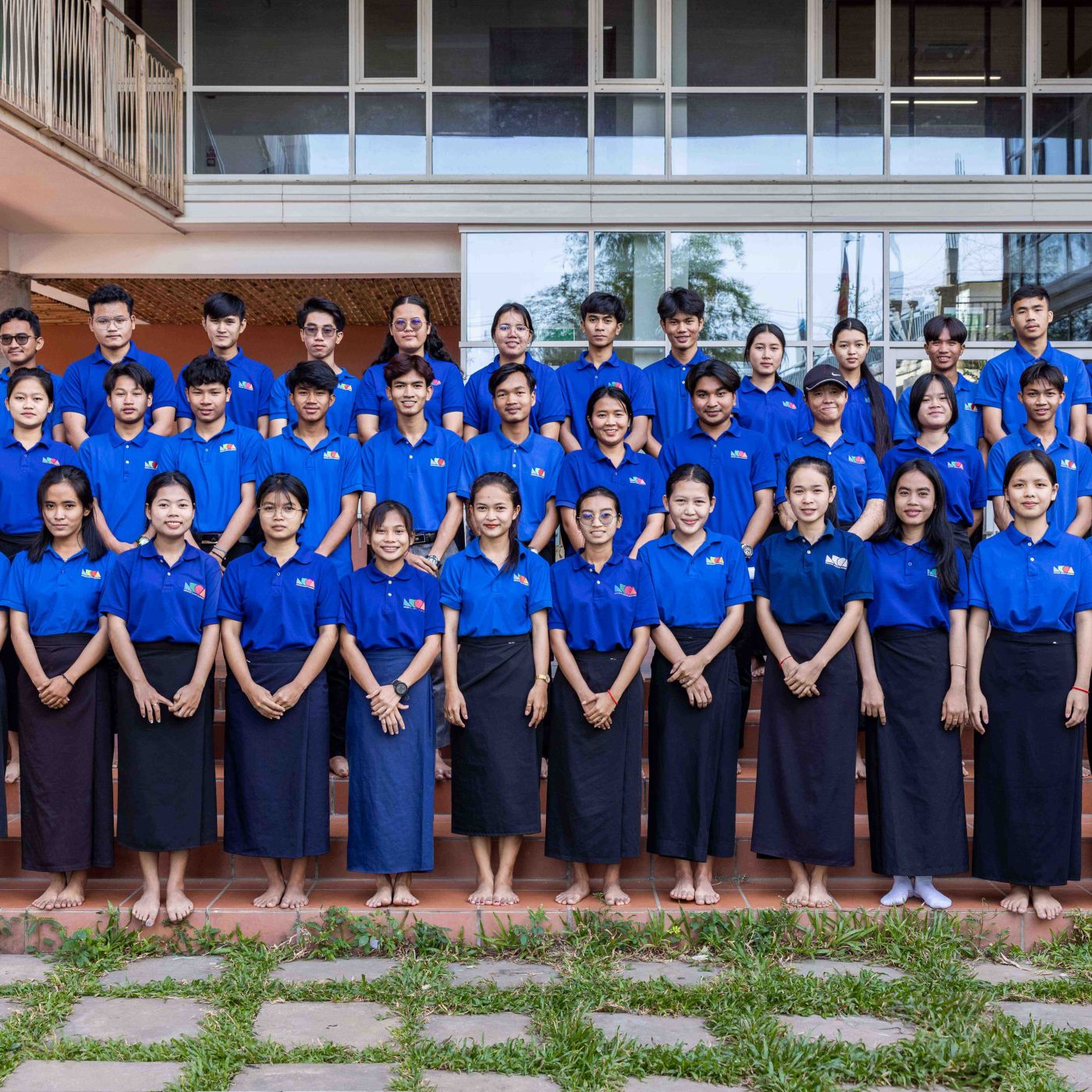 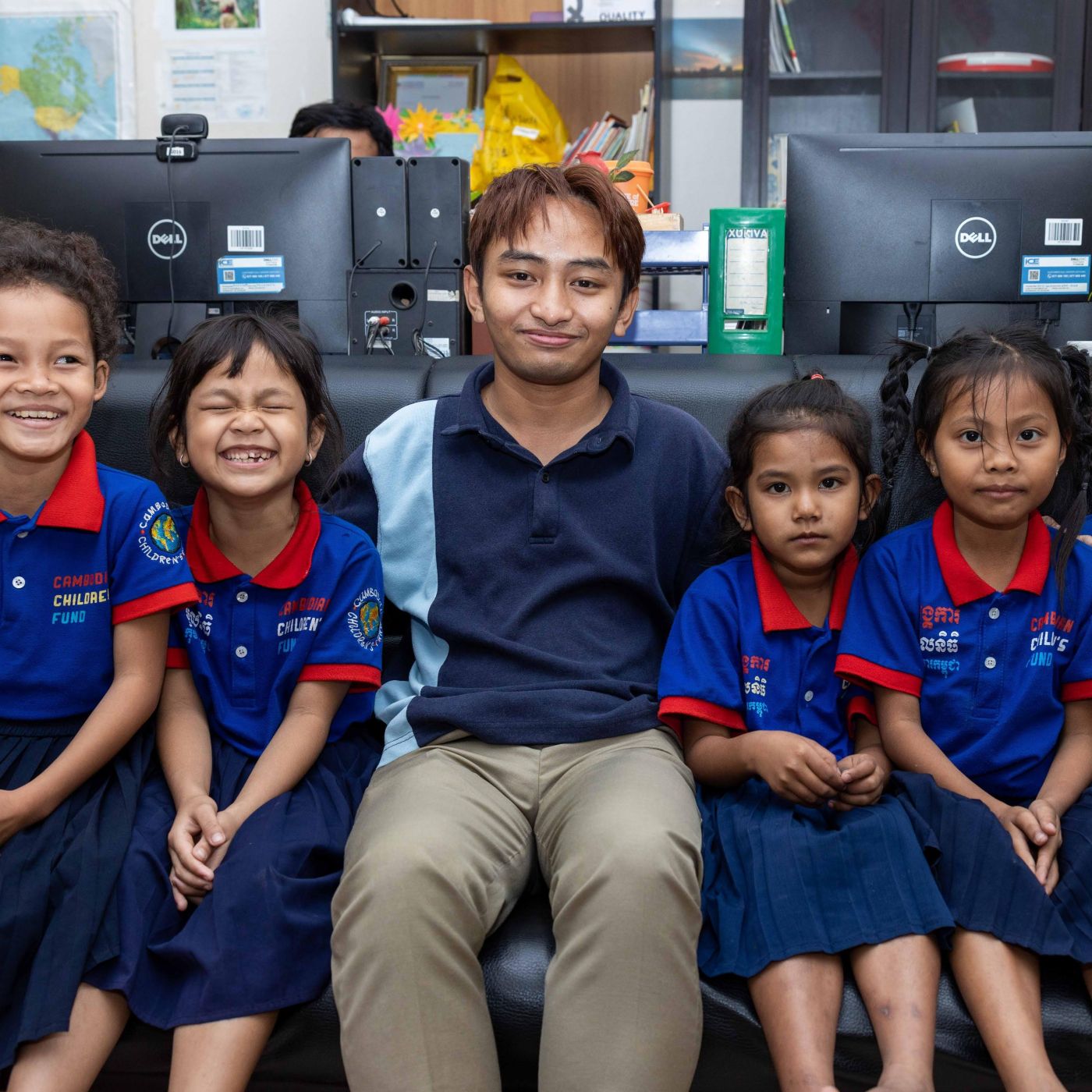