First of its kind initiative in Cambodia by CPU sees international experts offer murder case training for local police officers A unique Homicide Symposium organised by the Child Protection Unit (CPU) to train Cambodian police officers and prosecutors in the latest crime investigation techniques has been a huge success. The 6-day event - the first of its kind to be held in Cambodia - saw more than 200 officers and law enforcement officers gather in Phnom Penh to attend the Symposium. 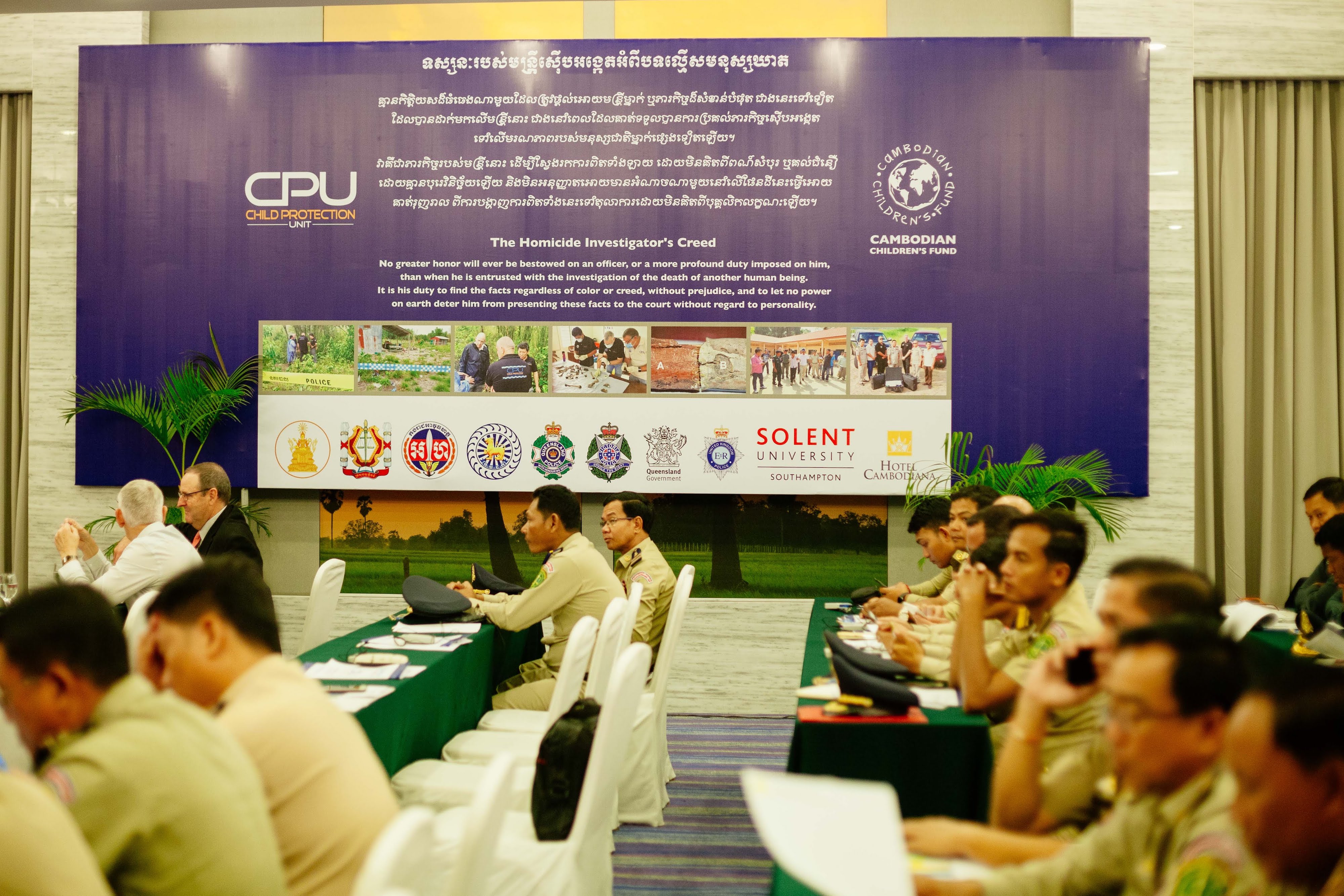 International experts from Australia and the United Kingdom, including former and serving police officers, were drafted in by the CPU to pass on their years of knowledge investigating homicide and serious crime, equipping Cambodian National Police (CNP) with the very latest forensic and policing methods to solve murders. “We are very fortunate to have these experts come to Cambodia bringing with them years of experience in the investigation of homicides,” said James McCabe, Director Operations at the CPU. “Being tasked with investigating the death of another human being is one of the most important roles an investigator can undertake”. Attendees the Symposium, which was held at the Hotel Cambodiana, included Cambodian National Police, Royal Gendarmerie and Prosecutors. They were taught the very latest in policing techniques to catch criminals, including DNA and blood analysis. “This will be a unique opportunity for all the attendees to gain firsthand knowledge and experience from some international experts on the techniques and methods used in the modern investigation of homicide,” said James McCabe. The CPU works hand-in-hand with the Cambodian National Police and investigative agencies to bring child abusers to justice and protect those who cannot protect themselves. Since it began in 2013, the CPU has investigated more than 1,400 cases of serious child abuse and homicides. The arrest rate, in collaboration with the National Police, is 89%. In Bora, National Deputy Commissioner General and Director General of the Central Criminal Department, said the partnership had produced good results. “We are very proud to be able to collaborate with the CPU,” he said. “A lot of work has been done in relation to crimes against children….” While robbery and pickpocketing are on the decrease in Cambodia, crimes such as murder are on the rise, said the police chief. This has been attributed to factors such as domestic violence, drug and alcohol abuse and poverty. Which means the Homicide Symposium would be invaluable for police officers and those investigating murders and serious crimes such as rape in Cambodia, he said. “They will be learning specialist skills necessary to suppress this kind of crime,” said In Bora. The Homicide Symposium has been certified by Solent University in the United Kingdom. Nigel Lee, a Lecturer in Criminology at the university in England, attended the Homicide Symposium as one of the guest presenters. “Homicides are often one of the most difficult crimes to investigate and to be able to pass on some of the skills and knowledge to help the Cambodian National Police investigate these crimes is an honour for all of us,” said Mr Le. Mr Lee, a former police detective who retired in 2107 after 25 years service, has been involved in teaching the CPU and Cambodian National Police since 2013. James McCabe, CPU”s Director Operations, said the Cambodian government was committed to reducing serious crimes such as homicide against children “Crime against children is a global issue, it affects all countries around the world. “The Cambodian government and CNP have a strong dedication to eradicating crimes against children in this country. There is a clear message: if you commit a crime against a child in Cambodia, there is a very good chance you will go to prison.” Kate Ginn/CPU