Community comes together to mark milestone with day-long event and street festival attended by a member of the Cambodian royal family Cambodian Children’s Fund has celebrated its 15 year anniversary with a special day of festivities bringing together communities, staff and supporters. More than 3,000 people including CCF children and families attended the event commemorating the remarkable journey that Cambodian Children’s Fund (CCF) has made since it began back in 2004. HRH Princess Samdech Sisowath Pong Neary Monipong, representing His Majesty King Norodom Sihamoni, presided over the official opening ceremony, which was followed by a street festival for the impoverished communities that Cambodian Children’s Fund (CCF) serves within the Steung Meanchey area of Phnom Penh, with live music and games. 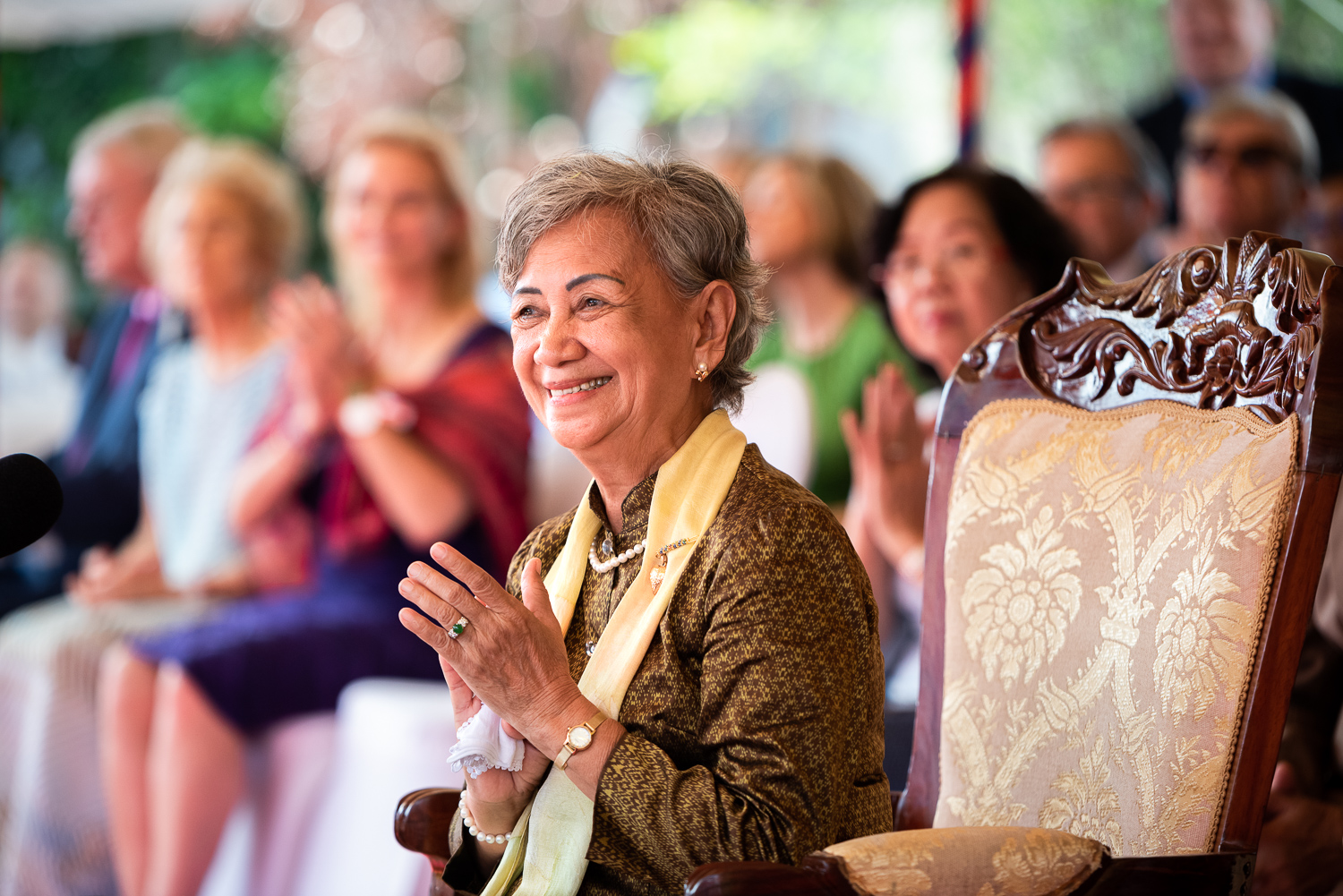 Guests at the ceremony included His Holiness Samdech Bour Kry, the leader of Buddhism in Cambodia and ministry officials. 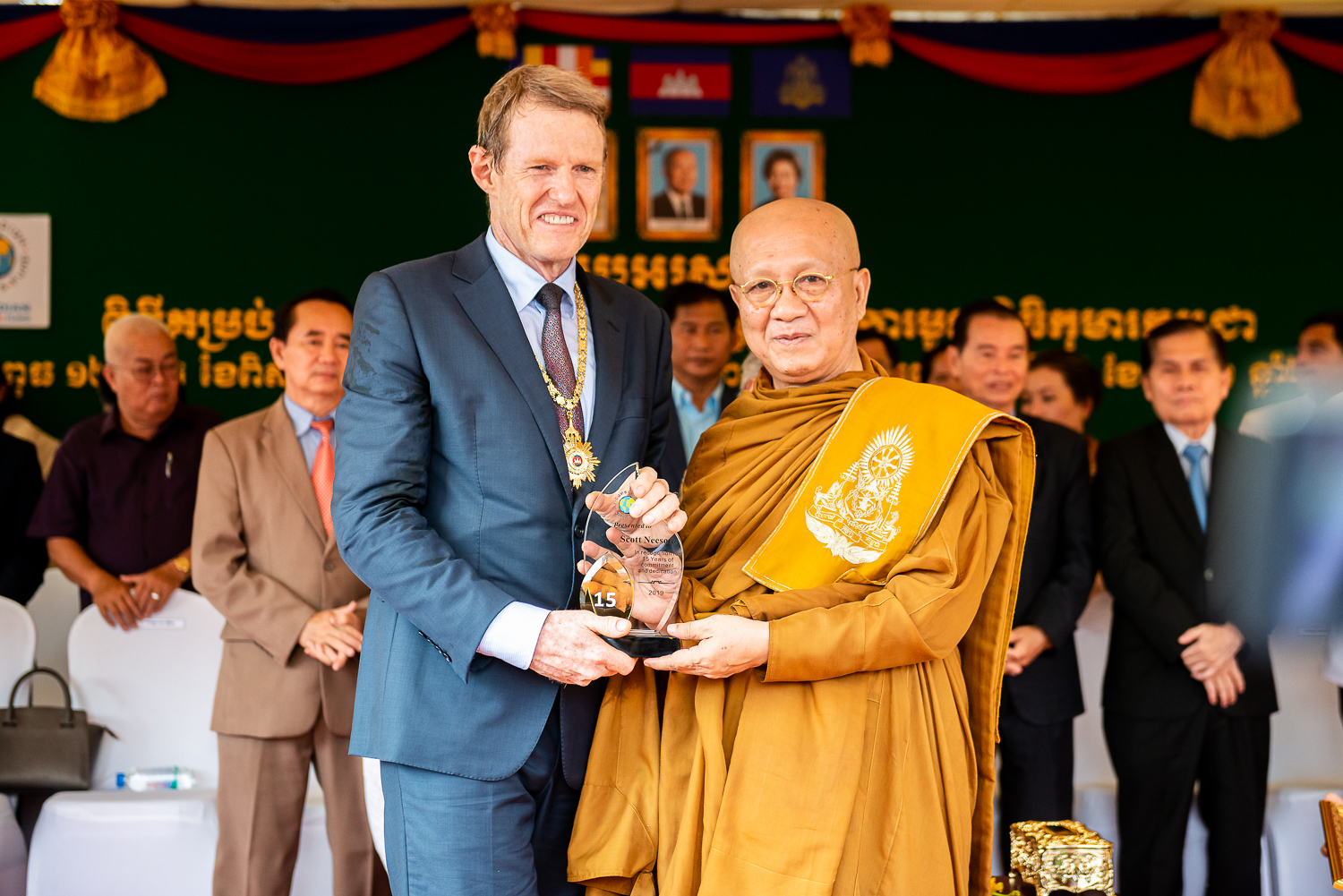 Several CCF staff and supporters - who had flown in from around the world especially for the event - were also honoured with awards recognising their contribution to CCF’s success. Scott Neeson received The Grand Order Of National Merit of Cheatopka, the highest honour in Cambodia, for exceptional services to the nation. 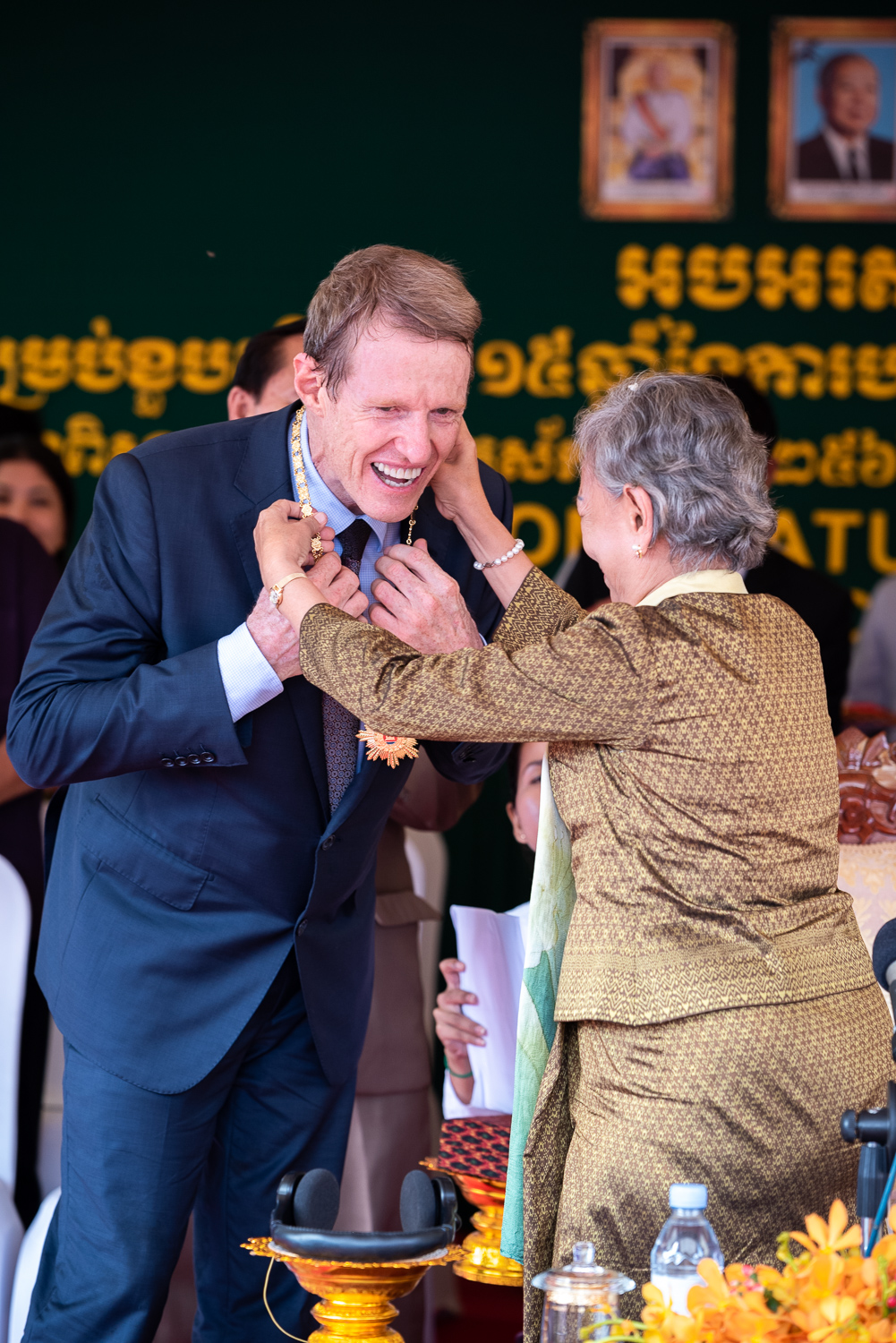 In a speech, HRH Princess Monipong praised the dedication of Scott Neeson and work of CCF to help Cambodian’s forgotten children. Speaking at the event, Scott Neeson, who has described the last 15 years as “the most challenging and rewarding of my life”, thanked CCF’s supporters and staff for their role in CCF’s journey. “Seeing you all together has made me realise how we’ve come this far. We have transformed the most wretched environment into something beautiful. A quality of education that was unimaginable just 10 years ago, is now one of the best certainly in Cambodia, with the majority of our students now moving into university.” He said that the “brutal sense of hopelessness of 15 years ago has been replaced with a sense of hope and a sense of opportunity, not just for our CCF students but also for their families, the grandparents, the sick and the elderly and those previously neglected.” Their legacy, he added, would be to change a generation for the “next 100 or 200 years.” 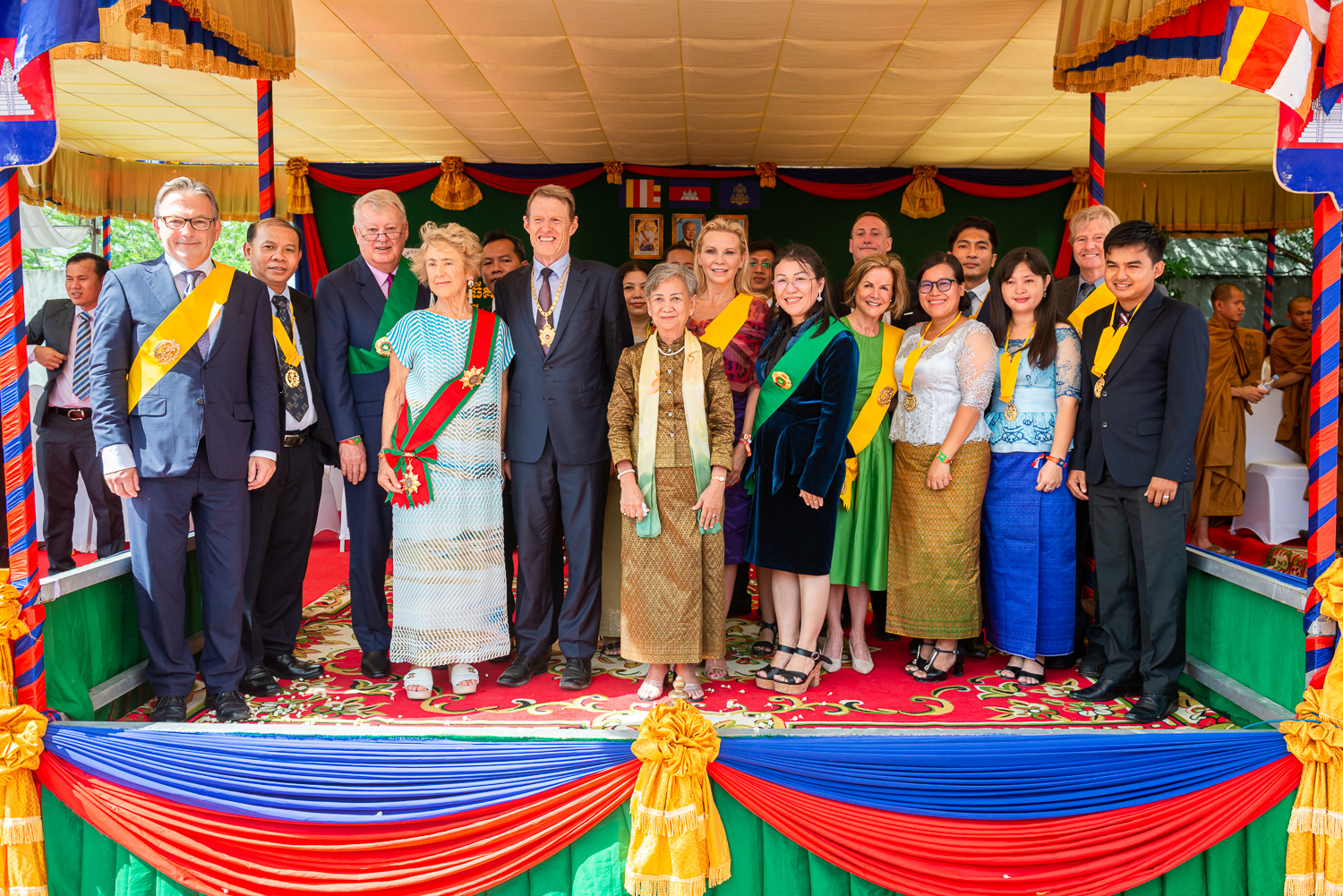 After the formalities were over, the fun began at the street festival, supported by main sponsor Smart Axiata, open to all the community, where everyone from babies to grannies joined in the jubilant atmosphere and games. 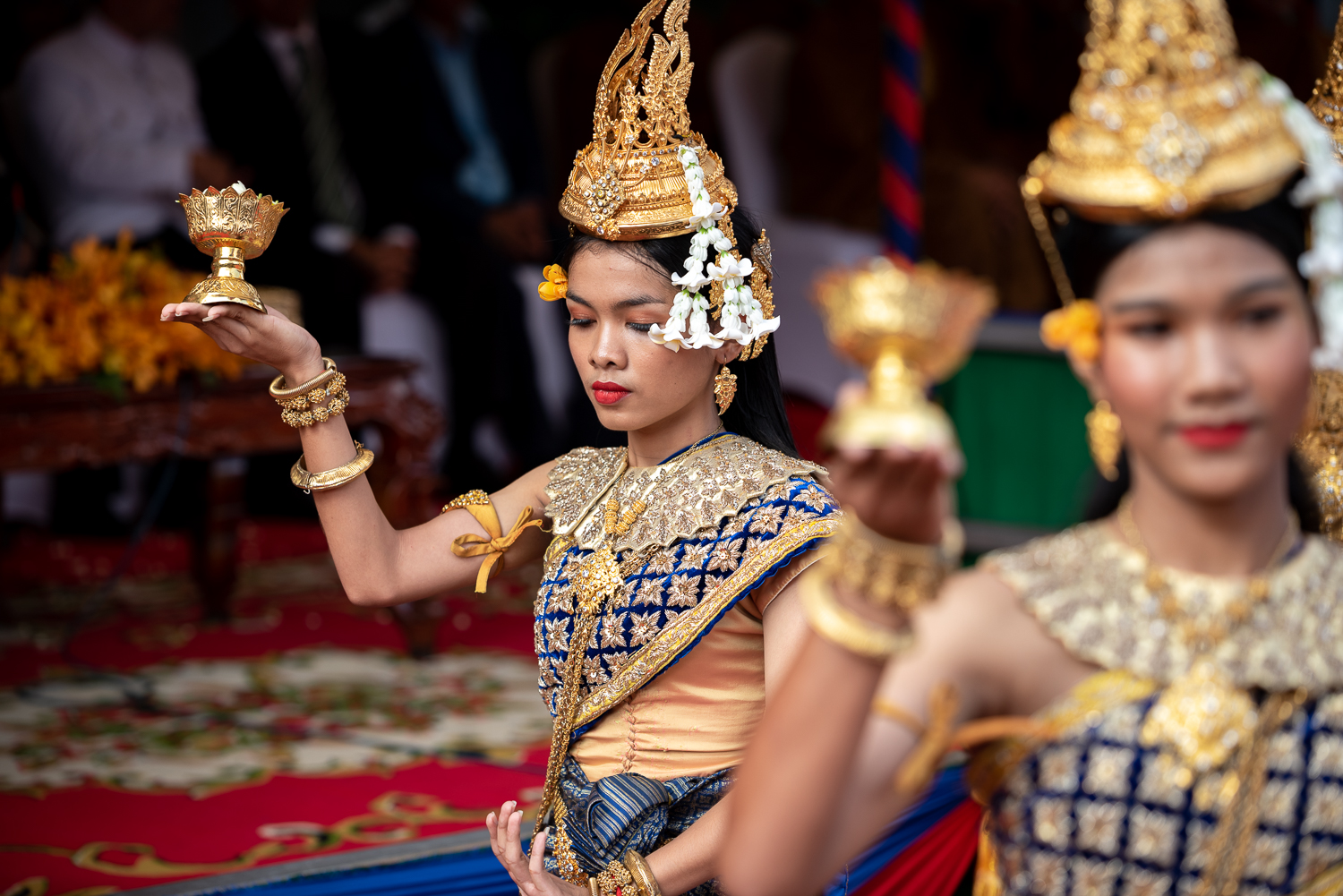 All the celebrations were set in the heart of the neighbourhoods where CCF works. Taking centre stage was the Neeson Cripps Academy, the flagship of CCF’s award-winning Education Program. CCF students were among acts showcasing traditional and modern performances. 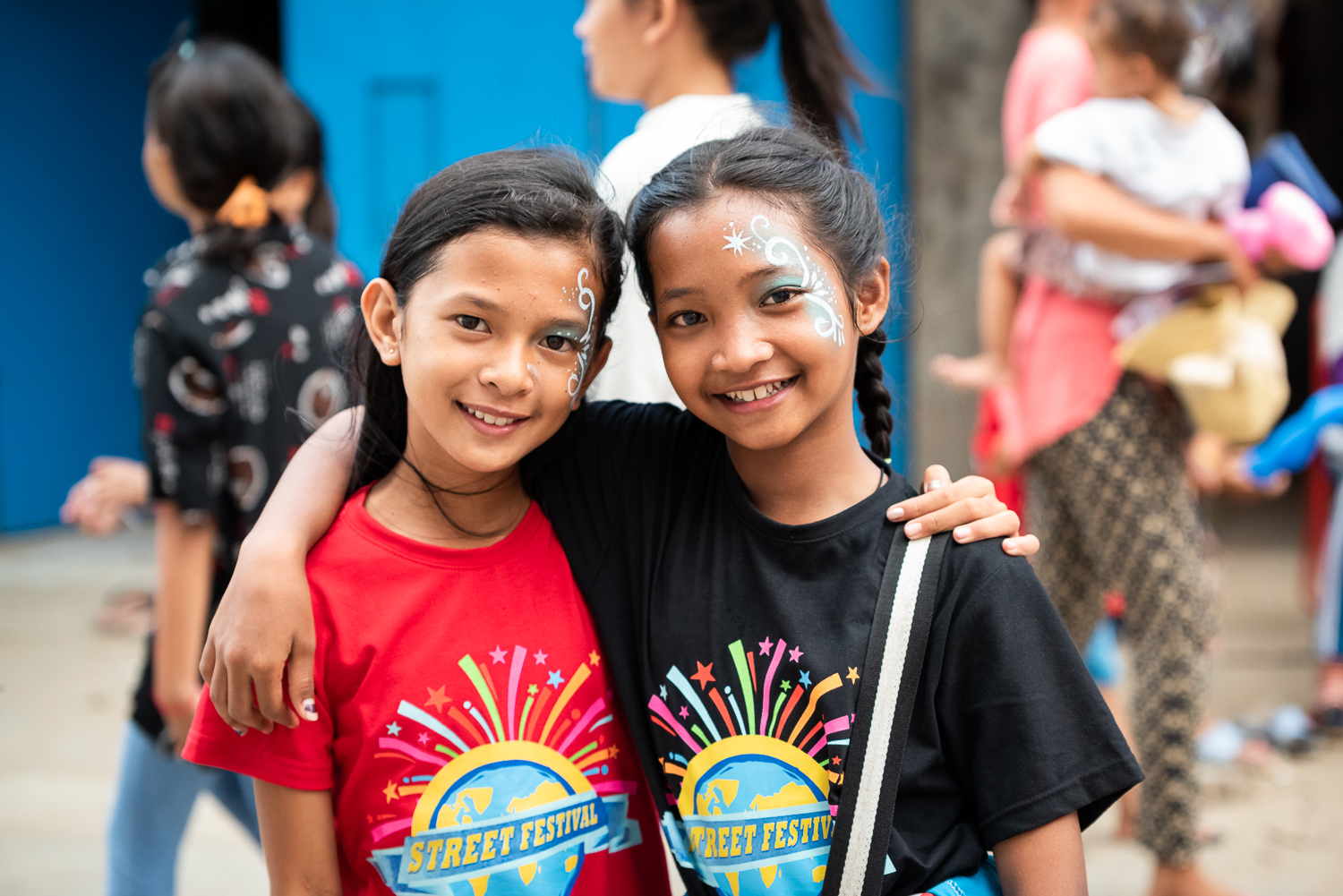 As well as marking 15 years of CCF, the day was a celebration of the achievements of the children and families of Steung Meanchey. CCF started with just a handful of children among thousands who worked and lived on the notorious city landfill site, the largest garbage dump in Southeast Asia at the time and one of the most dangerous environments in the world. 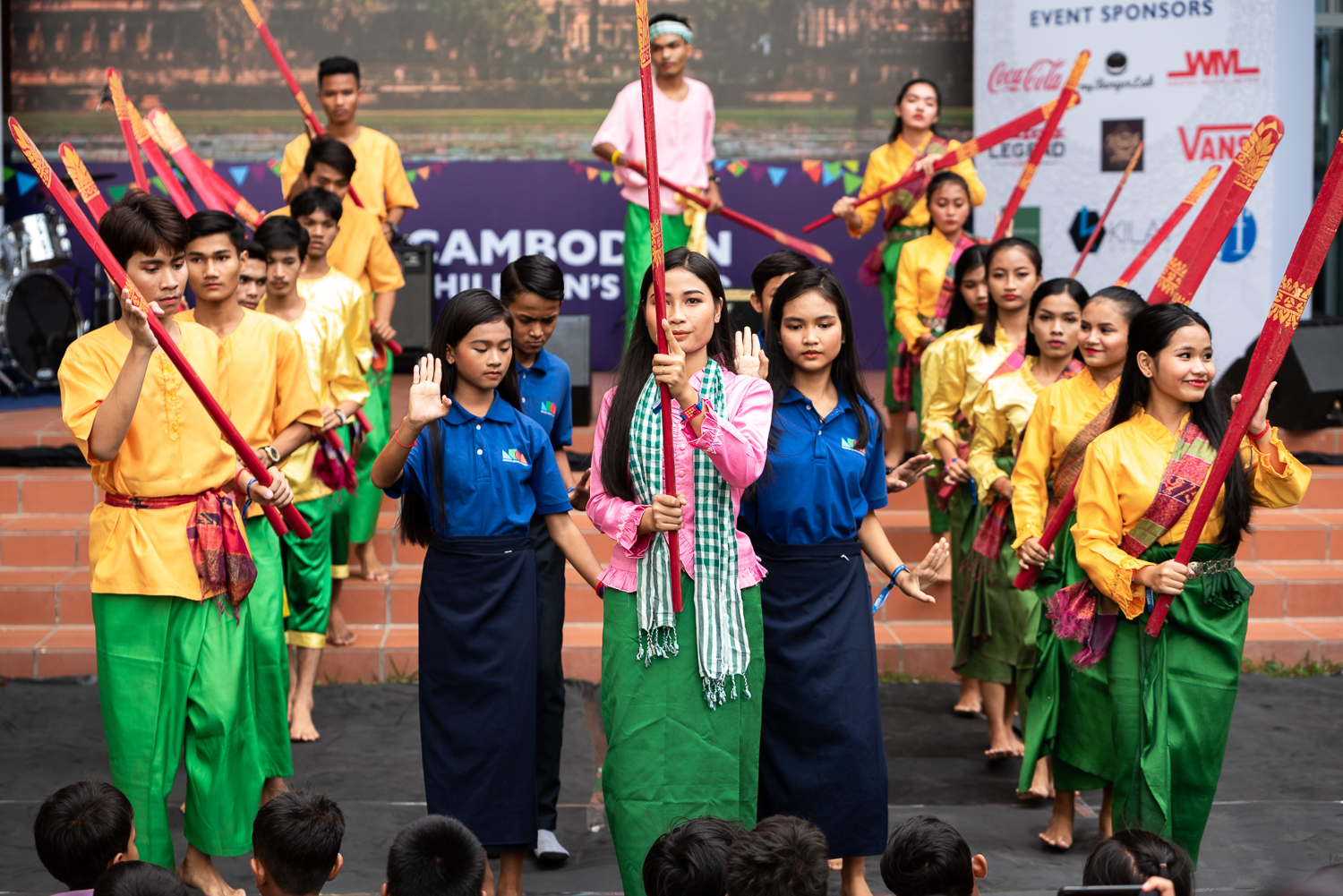 Today, there around 1,800 children in CCF’s life-changing programs working towards a better future for themselves and their families. Among those attending the event were some of the first children rescued from the garbage dump by CCF founder Scott Neeson, many of whom are now university graduates. “Knowing that the children of these CCF graduates, and the grandchildren and generations that follow, will never know the same poverty and squalor [of their parents’ and grandparents’ generation] brings me a satisfaction like now other,” said Scott Neeson. CCF’s lasting impact on the communities and families who once lived there without hope is acknowledged by local leaders. “CCF has done a lot to change the community. It has expanded education to reach many poor children. Before CCF, kids had to scavenge in the rubbish, they had no chance to get an education. Now children have access to schools,” said Touch Sam Ol, Chief of the Commune of SMC 2. “I would like to help CCF be present in the community for a long time as they continue to help the government.” 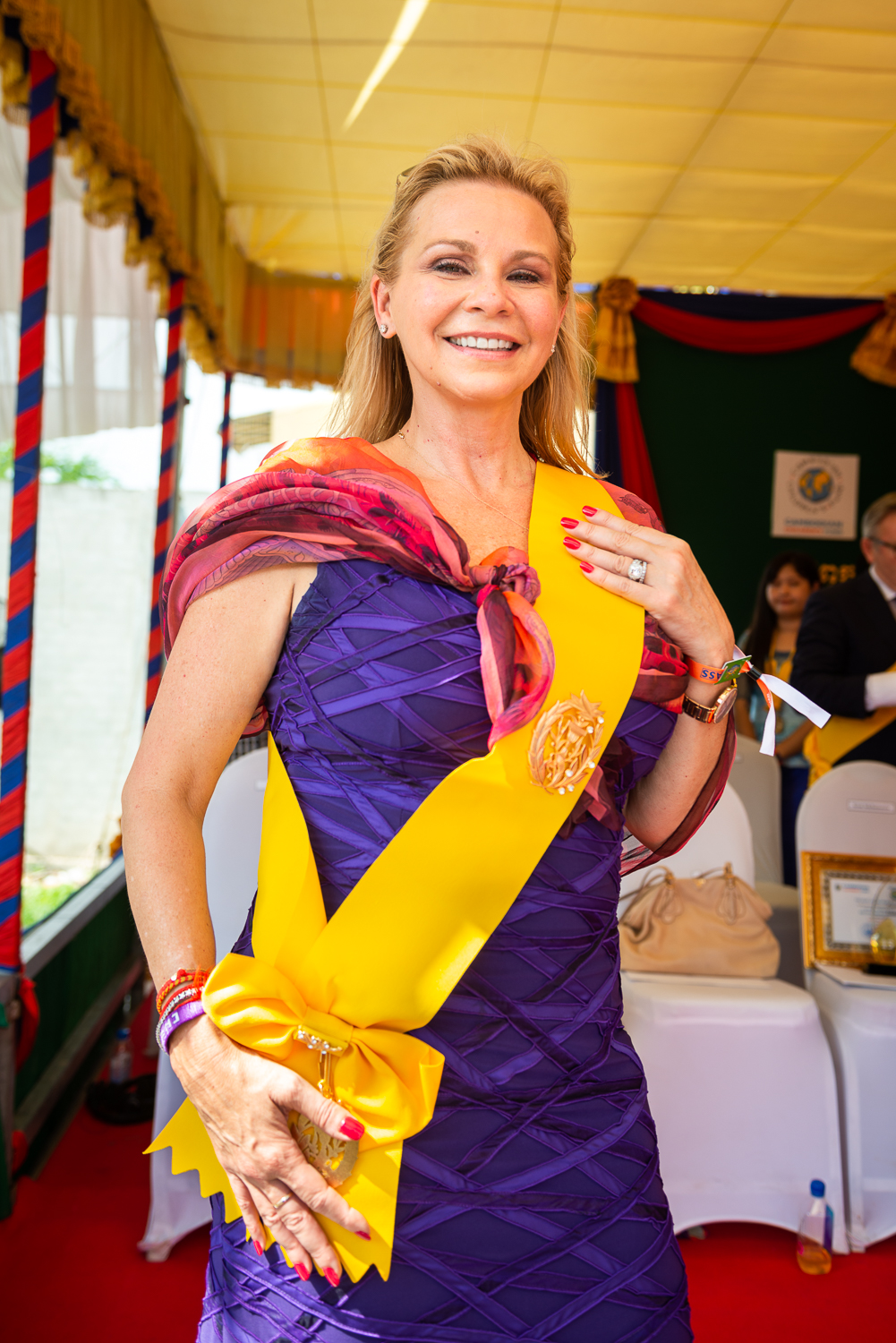 His sentiments were echoed by CCF supporters and donors who all have their own stories to tell of why they became involved with the organisation. Cammie Rice and her husband John have been part of the CCF family for nine years and generously funded CCF community school The Rice Academy, which opened in September 2014. “We were introduced to CCF in 2010 when we moved to Hong Kong, and immediately fell in love with the model: a hands-on effort to make a difference in the lives of each child it touched, creating opportunity for thousands of Cambodian children who otherwise would have none,” said Mrs Rice, who has served on both CFF’s Hong Kong and U.S Board of Directors. “Our reward and “return on investment” is significant as we’ve watched so many children learn and grow over the past nine years, and our association with CCF will always be an important part of our lives.” Robert Cripps, former Chairman of Velcro Companies, which funded the Neeson Cripps Academy, has been a supporter of CCF since visiting several years ago. 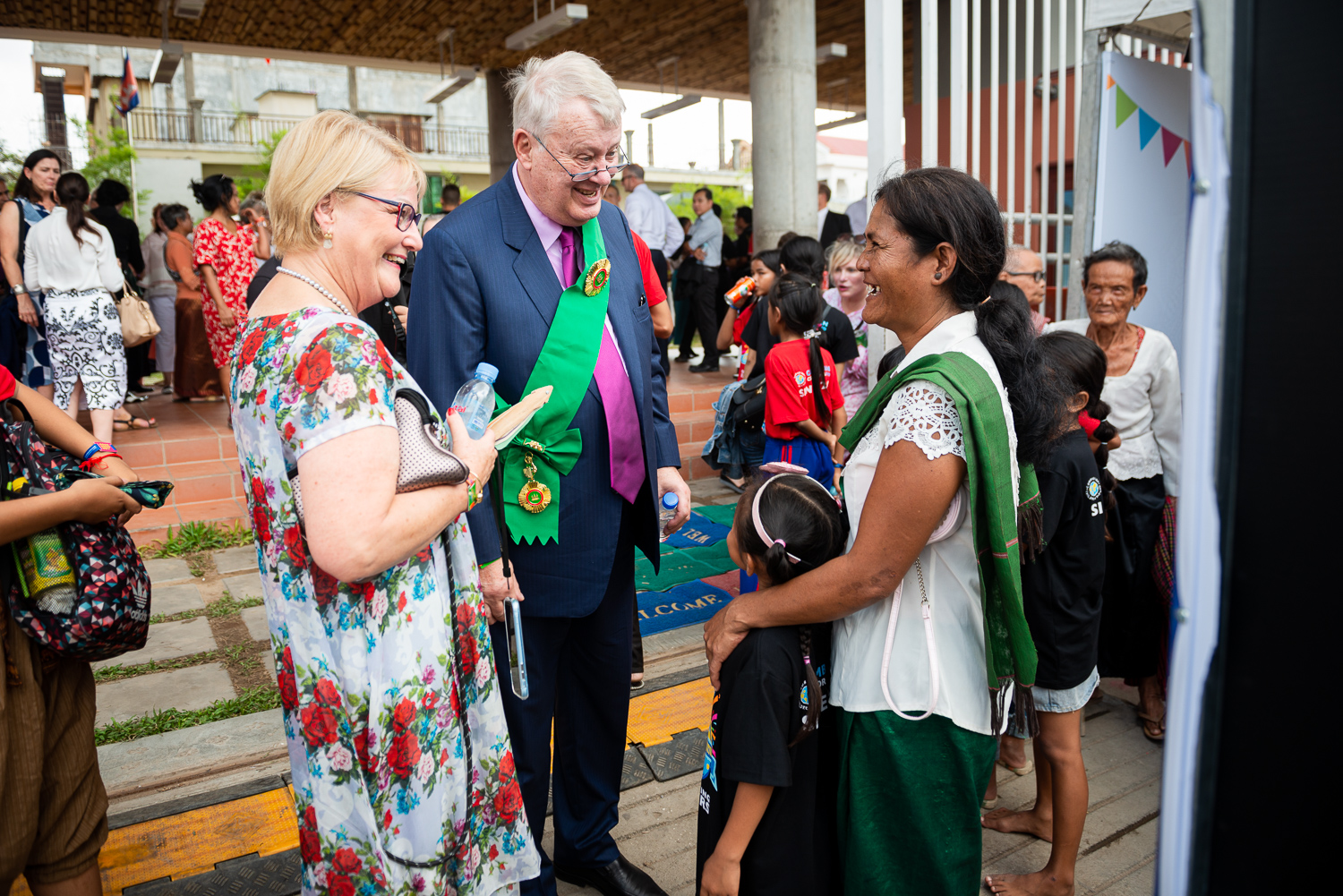 “I suppose we’re no different from most of Scott’s visitors all you have to do is to visit CCF and you’re hooked. It is immediately evident that the sheer goodness of what CCF is about is a wonderful and positive thing. All my family are now lifelong supporters.” Libby Vaughan, Founder of CCF’s Hong Kong office and former Board Director, whose family sponsors three CCF children, said: “I’m so excited to attend CCF’s 15 year’s celebration and see all our achievements and the impact on the community we work with. 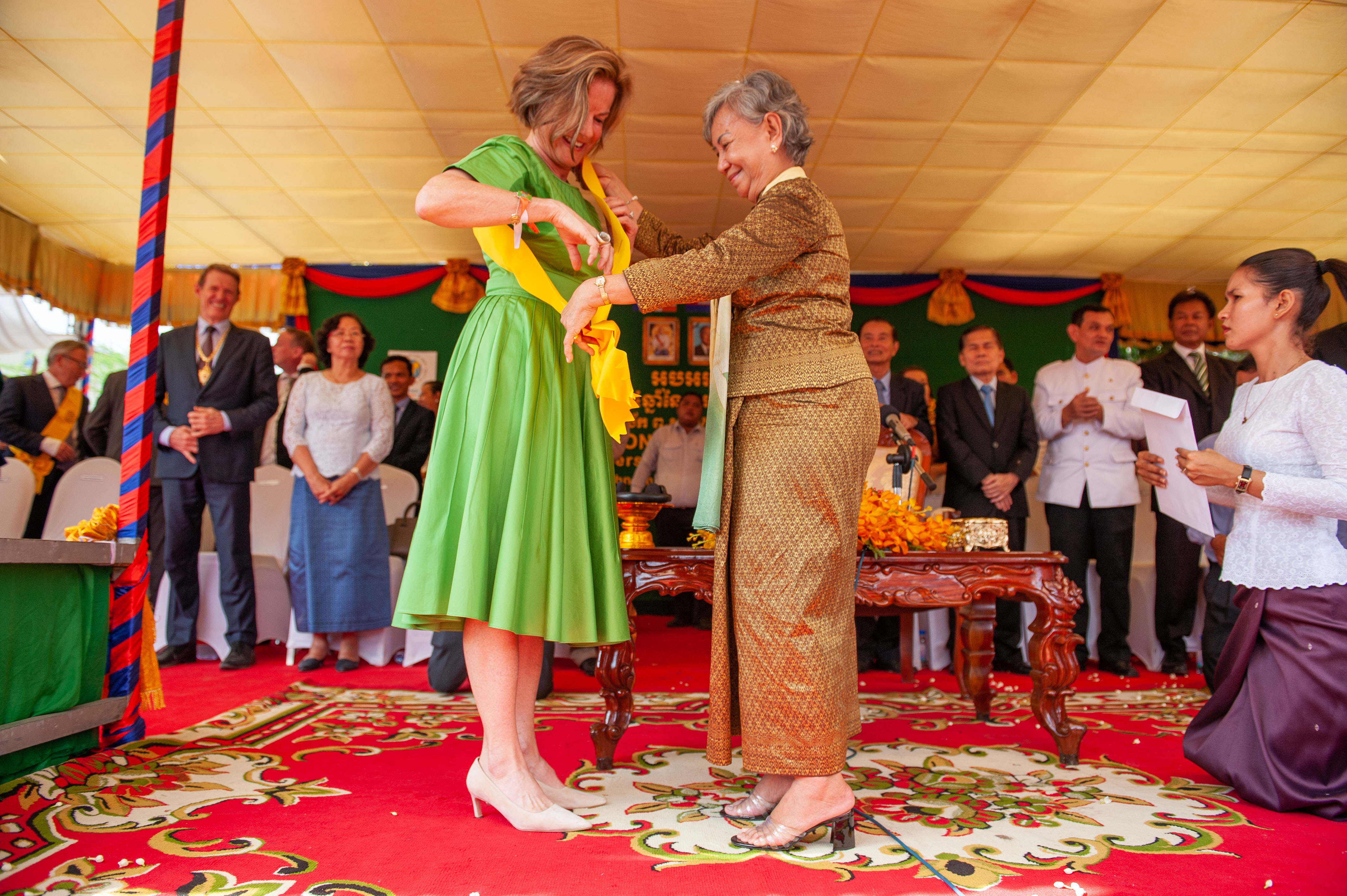 Over the past nine years I have seen such positive changes at CCF, from the development of our education and community programs, to my proudest moment last year when 26 of our students that I met in 2010 just graduated from university.” As the sun set on the day and the event, CCF’s founder Scott Neeson was where he’s happiest and likes to be best - out in the community with the children and families. 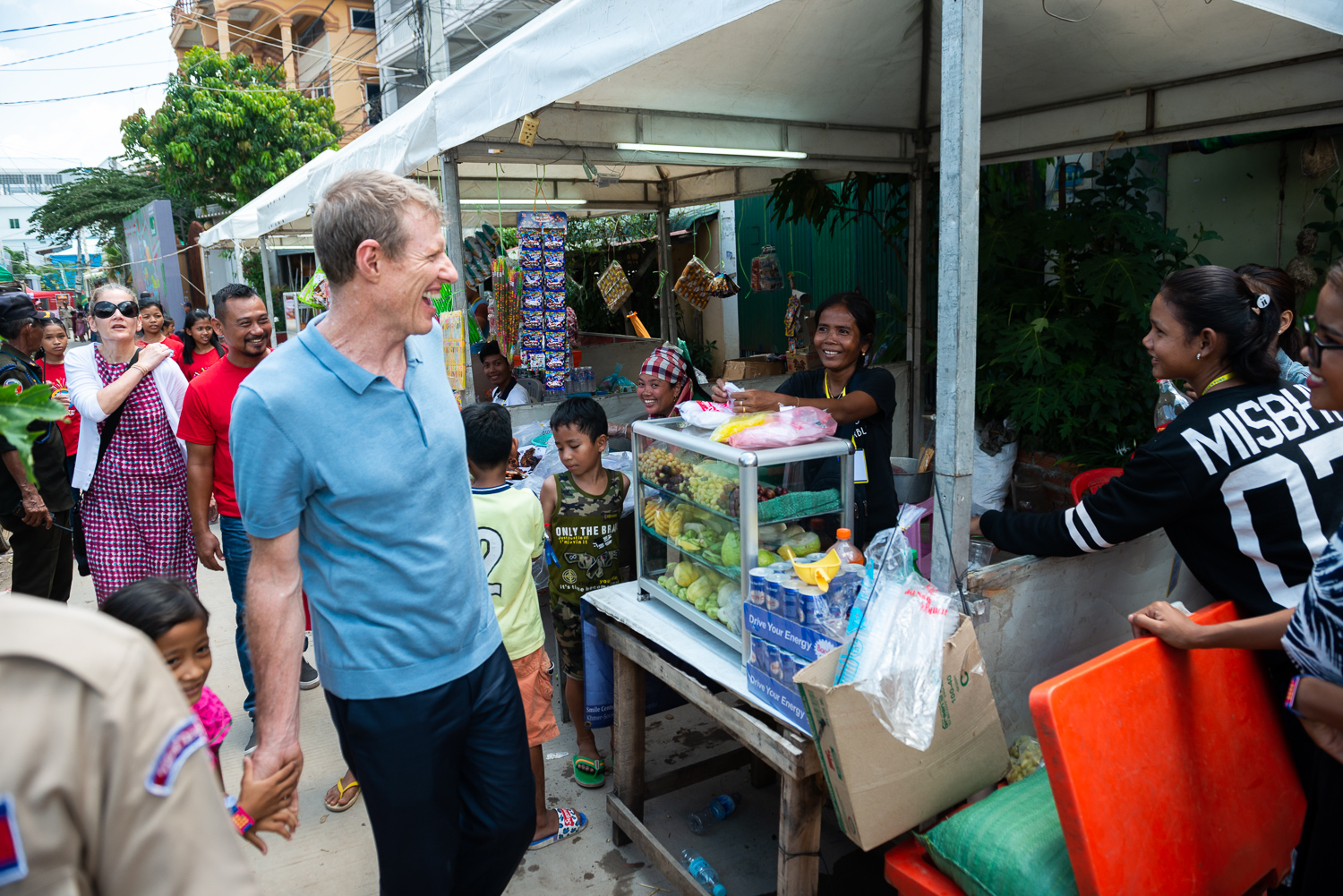 “I am very proud of the profound change CCF has brought to the Steung Meanchey area and enormously grateful to all those who supported me and CCF in this journey,” he said. Kate Ginn/CCF