Som Vannita didn’t begin English classes until she was 10 years old when she joined CCF. Nine years later and she has the world at her feet after winning a scholarship to Trinity College in Melbourne

The first English classes that Som Vannita attended were not held in a conventional setting. Every evening, she would head to a bakery near her home in a small community in the Steung Meanchey district close to where CCF works. This was where CCF vocational students were being taught the art of baking. At 5.30pm when baking classes were finished, it would be turned into a makeshift classroom for English lessons. “We would set up chairs, the whiteboard, and the kids would come in for lessons - a very humble version of our satellite school program,” remembers Scott Neeson, CCF Founder and Executive Director. It had been set up in response from local children wanting to study English. “When I was there in the early evenings, kids would be there, asking to study at CCF,” says Scott. “So rather than have them travel to CCF5 each night, on the other side of a busy street, we made it a satellite class (later 3 classrooms).” In the same place where earlier the smell of baking bread had been wafting in the air, the eager young students would file in to learn. Among them was 10-year-old Som Vannita, who lived in the village. 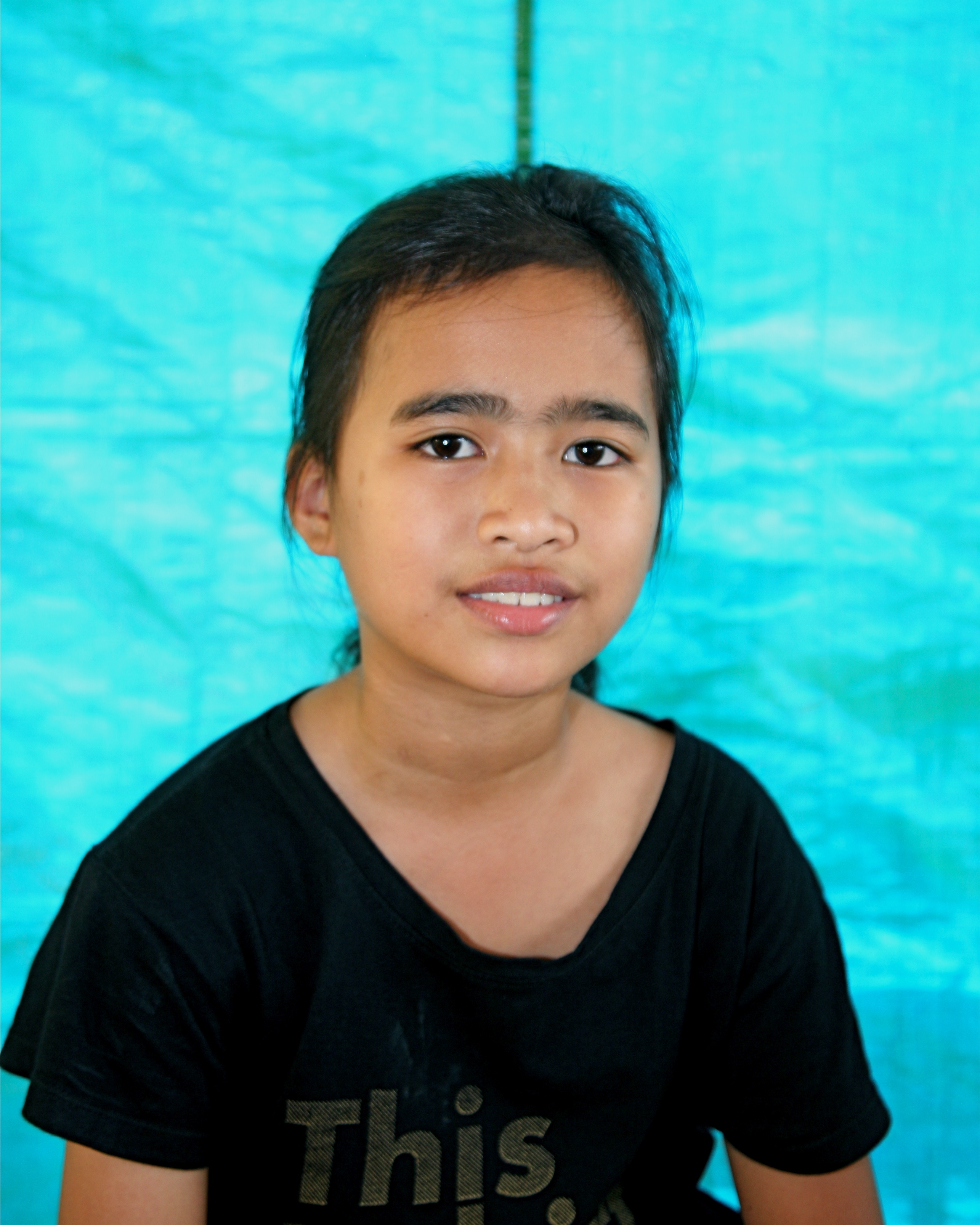 “I remember the class was in a bakery, where they made bread,” says Vannita. “I would walk home and see people [children] going to sign [up] for English class and I wanted to do it but my mother was worried because it was a class in the evening. I convinced my mum that it was ok and I could take care of myself. “At that time, I did not really know English at all, my dad just taught me at home. “I started to try learning English and the teacher really helped me to improve my English and push me more. “After about a year, I finally got top five with an English test and I got a certificate.” She went on to join CCF’s educational program full-time and started lessons in a proper classroom instead of the CCF bakery, which has since closed. 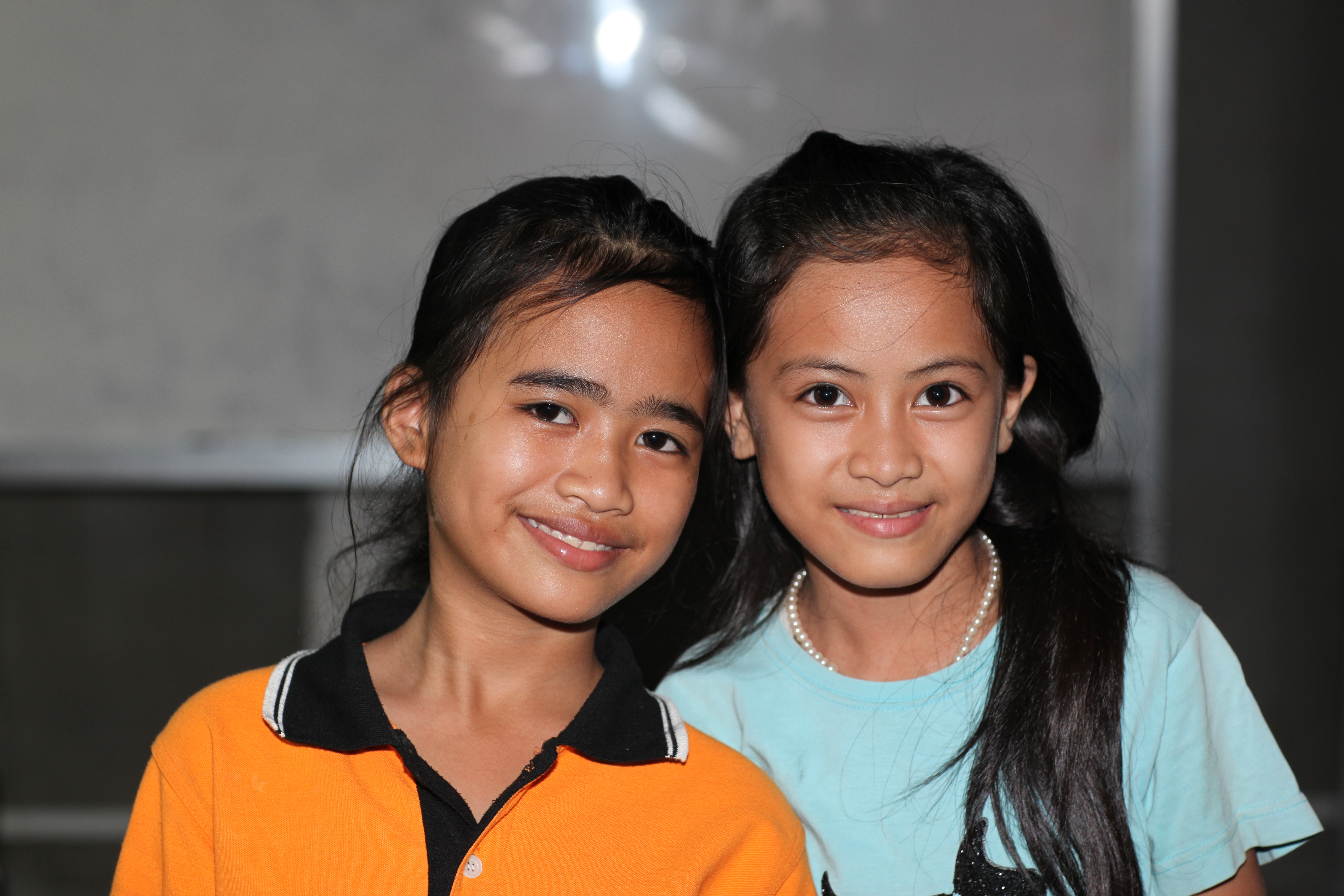 No-one - least of all Vannita - could have imagined at the time just how far she would go. Now 19, the “bakery school student”, as Scott Neeson still affectionately refers to her, has just won, at her second attempt, a full scholarship to study at Trinity College at the University of Melbourne, becoming the fourth CCF student to be accepted. 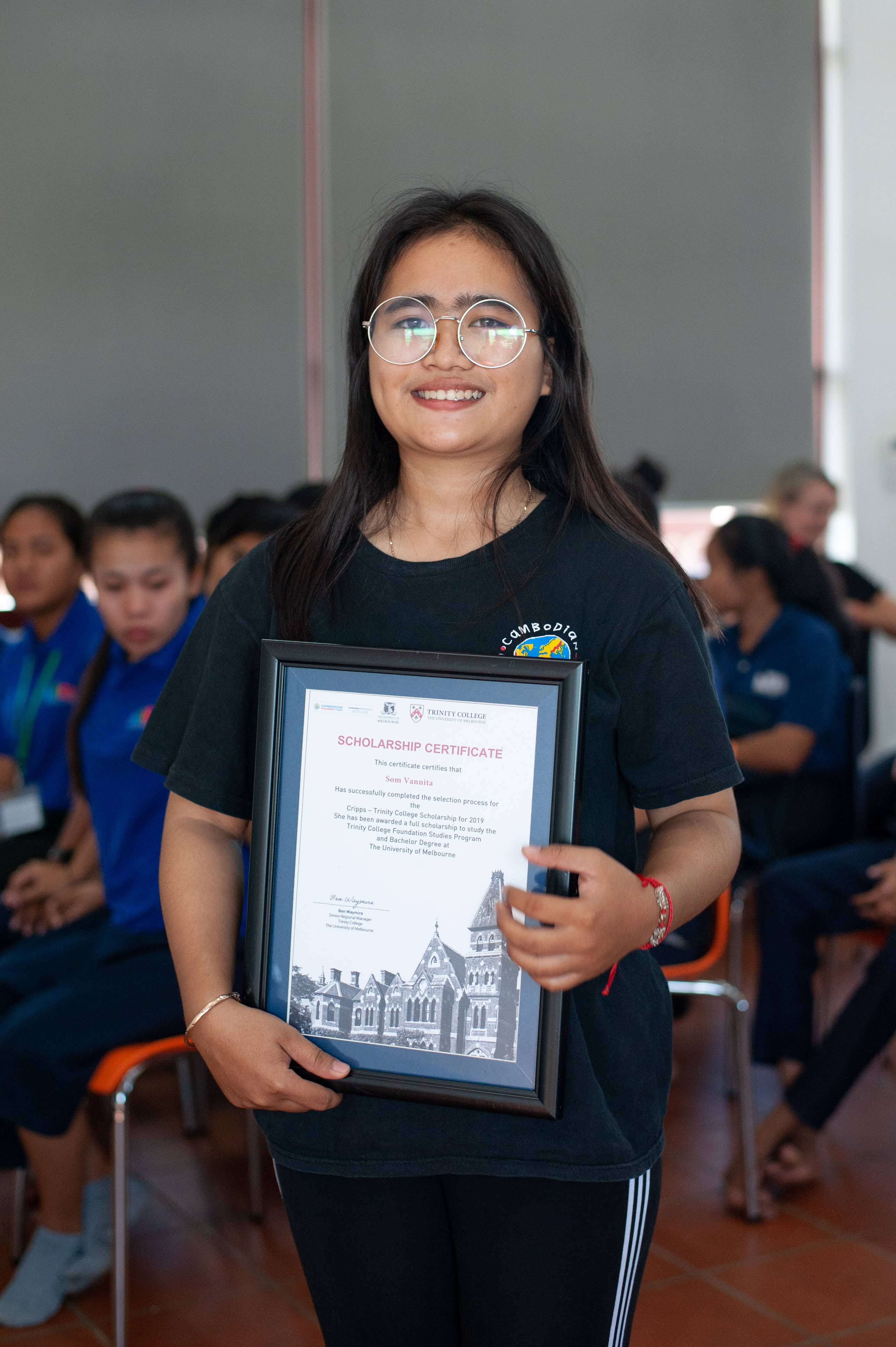 Considering Vannita’s background and late introduction to the English language, it’s a remarkable achievement. Vannita grew up in Trea village, a short moto ride from CCF’s Neeson Cripps Academy (NCA), where she would study when it opened in 2017. Her parents worked to support Vannita and her younger brother, her mother as a garment factory worker and her father various jobs (now a taxi driver). “I was very shy back then,” says Vannita. “I was really afraid to talk to other people. I would go to school and just stay at home. There were a lot of problems in the village, fighting and noise. “When I came to CCF, I made a lot of friends and it made my childhood better.” At CCF, Vannita began to blossom. She made friends and was self-assured enough to mix with international visitors to CCF. Below, Vannita is pictured far right meeting American actress and devoted CCF supporter Heather Graham, centre, with Scott Neeson at the NCA. 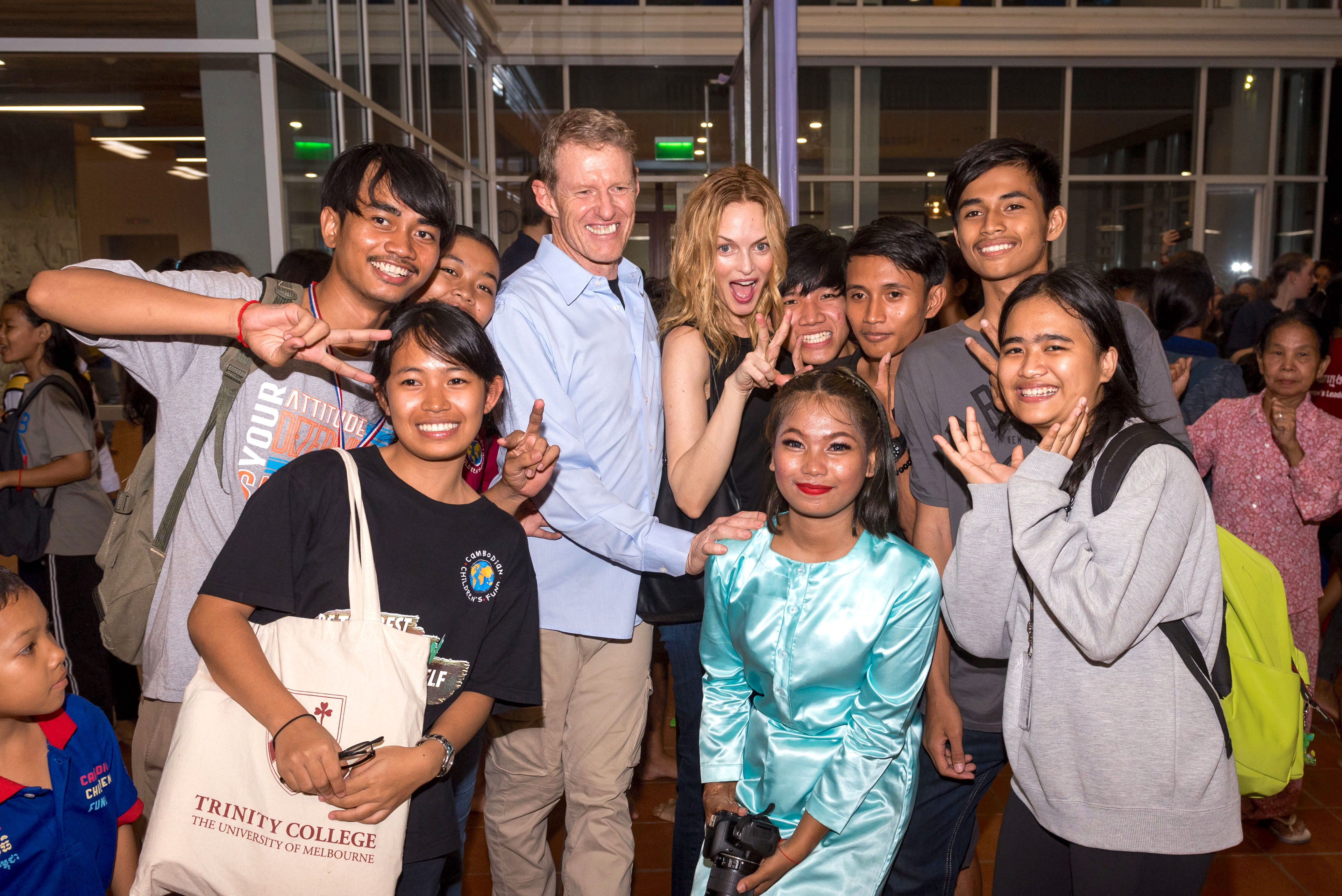 She shone in the classroom, winning Student of the Year for her grade in 2012. 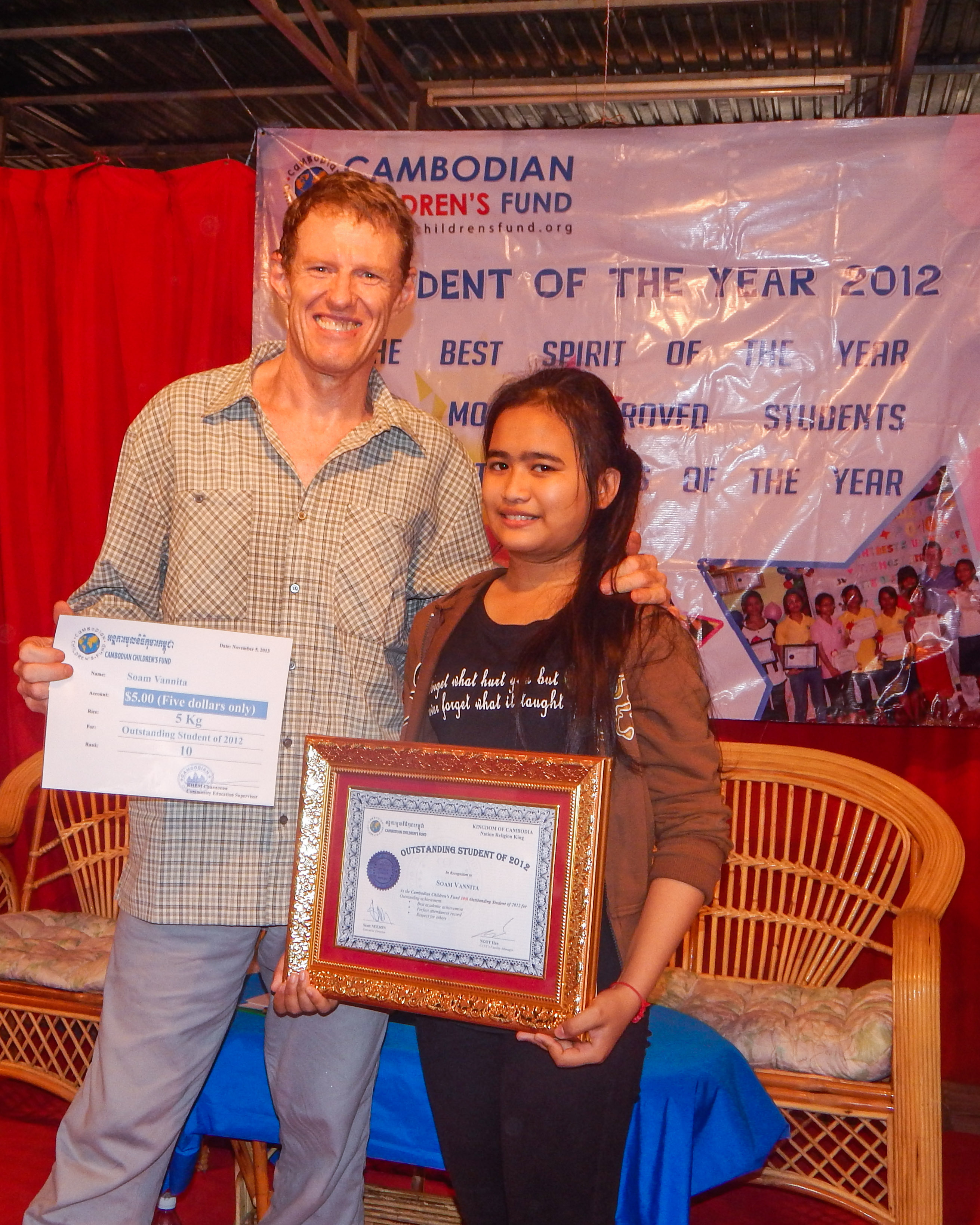 In 2016 she won a CCF place at The Tony Robbins Foundation Global Youth Leadership Summit (GYLS), a five-day program for young people held in the U.S. 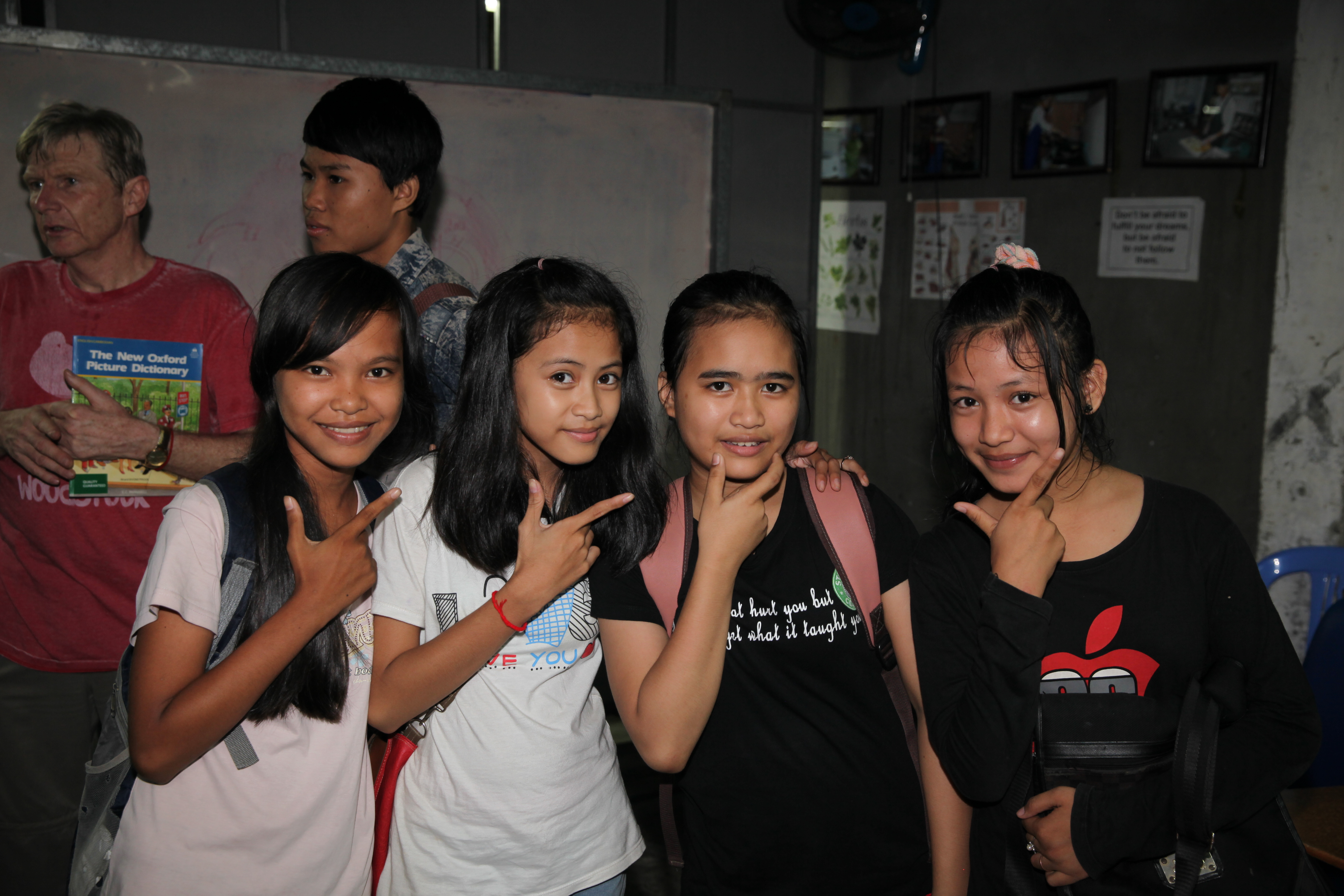 She also got the chance to visit Trinity College last year after being selected as one of four CCF students for a Young Leaders Program. She got to see classes at Trinity and attend lectures, valuable experience for her new challenge ahead. “It was really incredible. I can say that I changed a lot after I went there,” says Vannita. “I gained a lot more confidence. I was an independent person, talking to people and making connections.” After Grade 12, Vannita got a scholarship for one year of study at the National University of Management, a business school in Phnom Penh, where she has just started the second year of a degree majoring in Economics and Business. Her study is combined with working as a Leadership Assistant at CCF, a role she started three months ago. She still lives at home with her parents and brother, who is in Grade 6. Last year, Vannita applied for one of two CCF scholarships available for Trinity College but narrowly missed out. “I did my best but the result came out and I had to accept the truth and I start to try harder again. I didn’t really expect another chance,” she says. But she did get another chance and this year, she went one better. “I didn’t really have high hopes,” she says. “There were a lot of other strong candidates. I just focused on doing my best and did not expect anything.” It was clear from her reaction just how much winning the scholarship meant as her name was read out at the grand announcement held at the NCA and she collected her certificate from Scott Neeson. 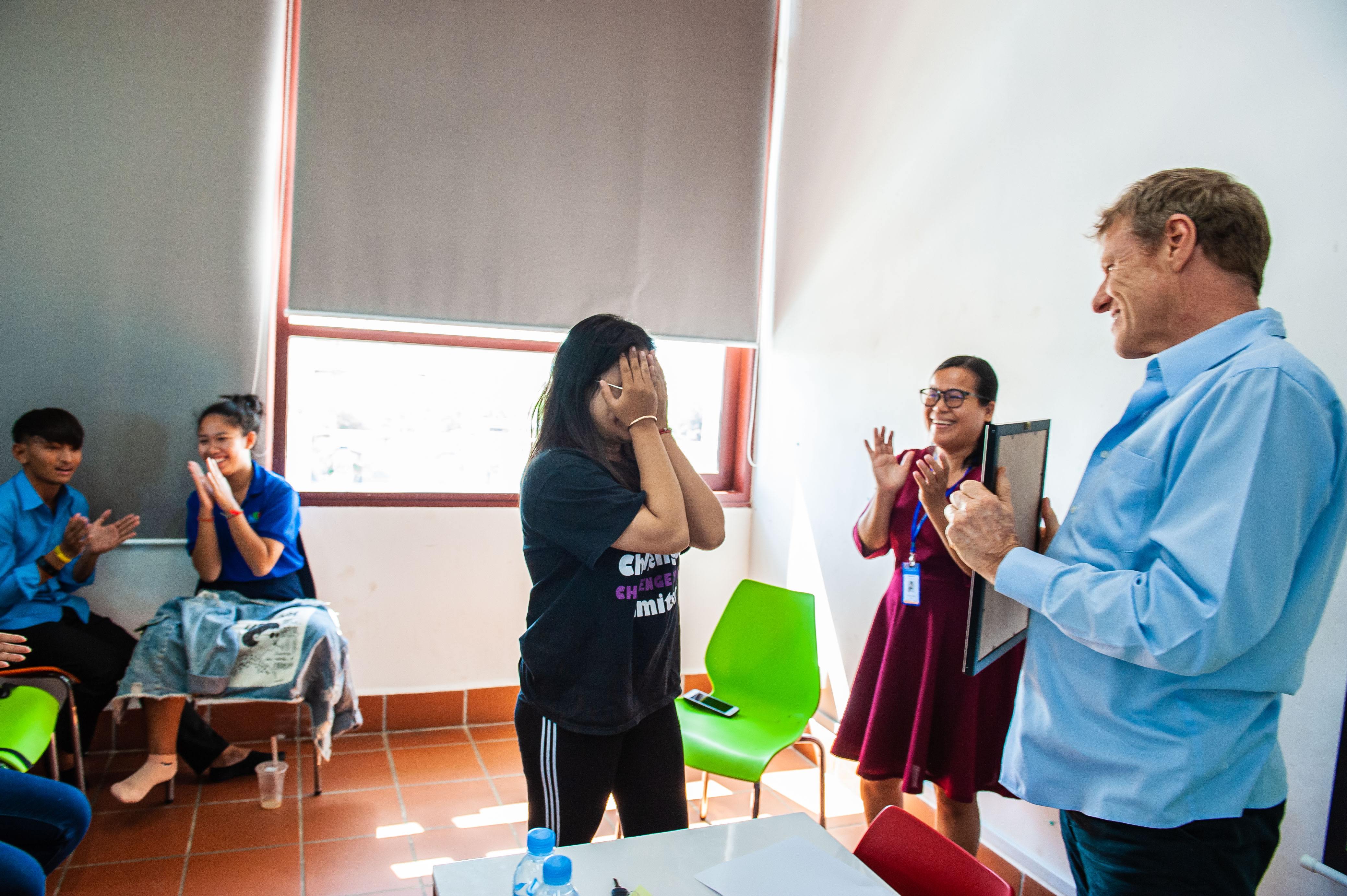 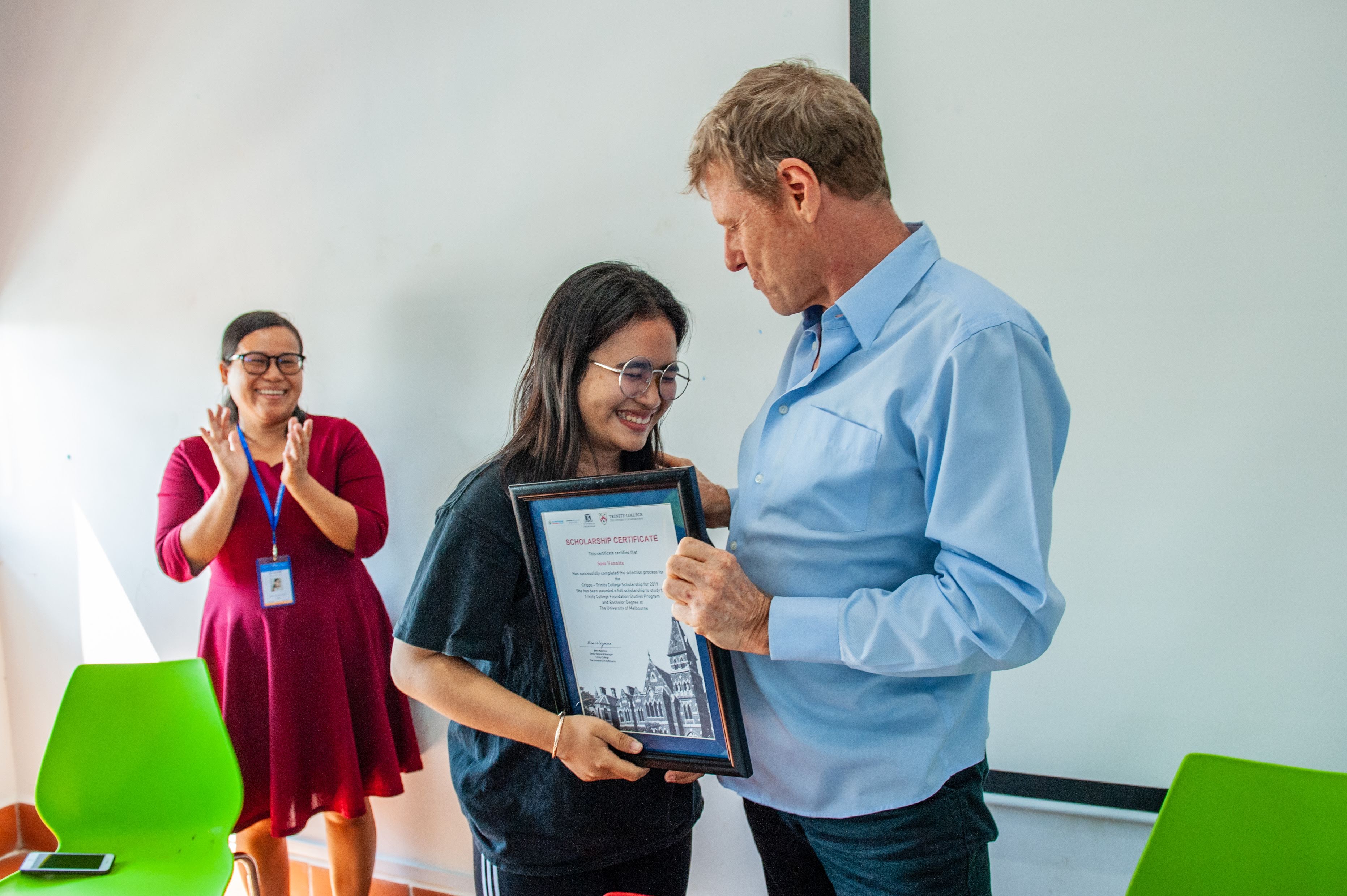 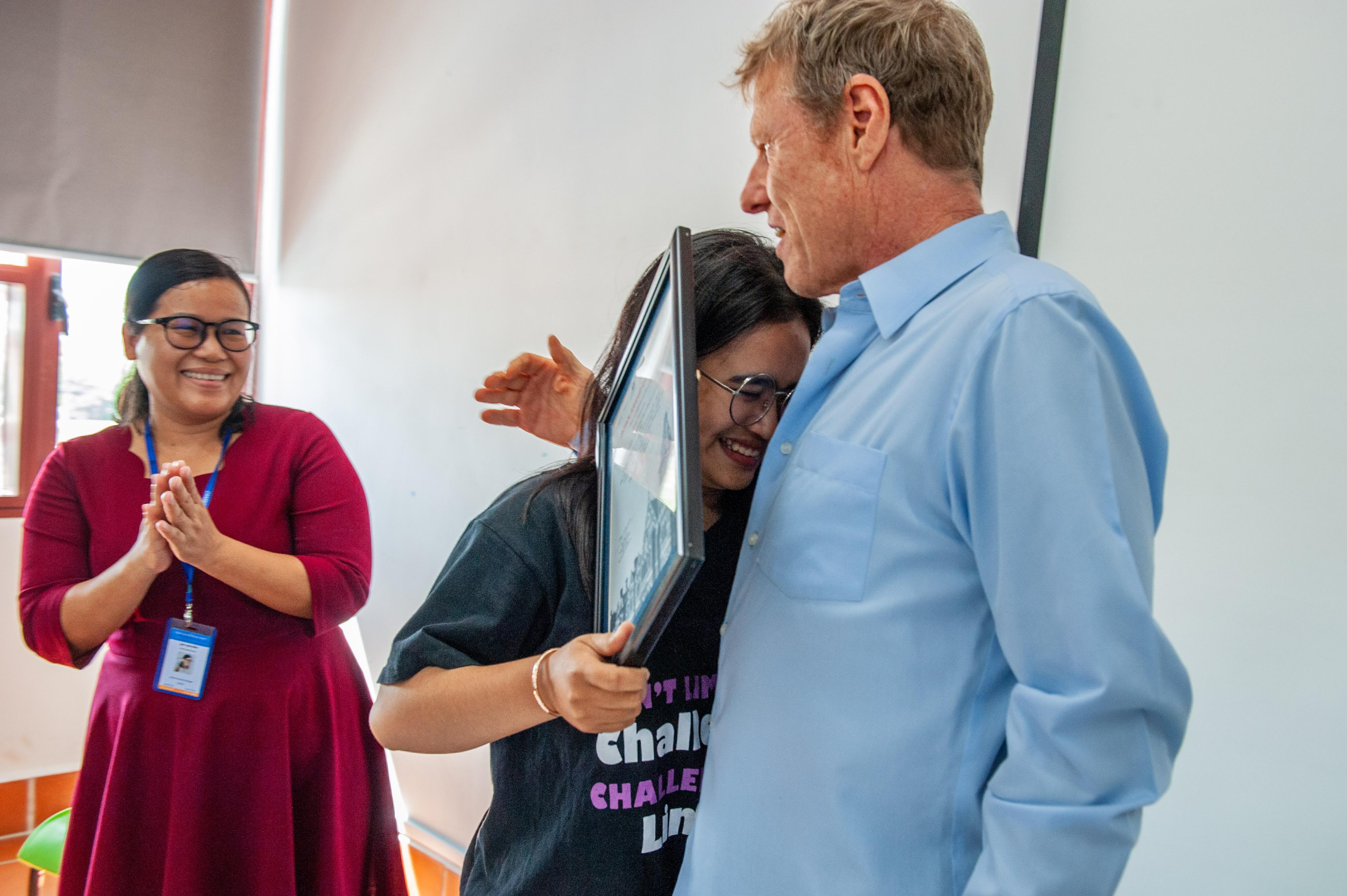 “I can only say that I honestly did not expect it and I was so happy,” she says now. ‘My parents will be happy for me. They encouraged me not to give up and to focus on my studies and whatever I do, they are always there for me, pushing me to work harder.” Now, she will be moving 6,880 km away from her family, friends and CCF to start a new journey and life in Australia. The full scholarship offers a one year Foundation Year at Trinity College before a degree course at the University of Melbourne. Vannita won’t be alone. Keeping her company will be fellow CCF scholars Seng Hoarng, Sophy Ron and Yem Sovannry (pictured below), who won places in 2017 and 2018, and have already blazed the path ahead. 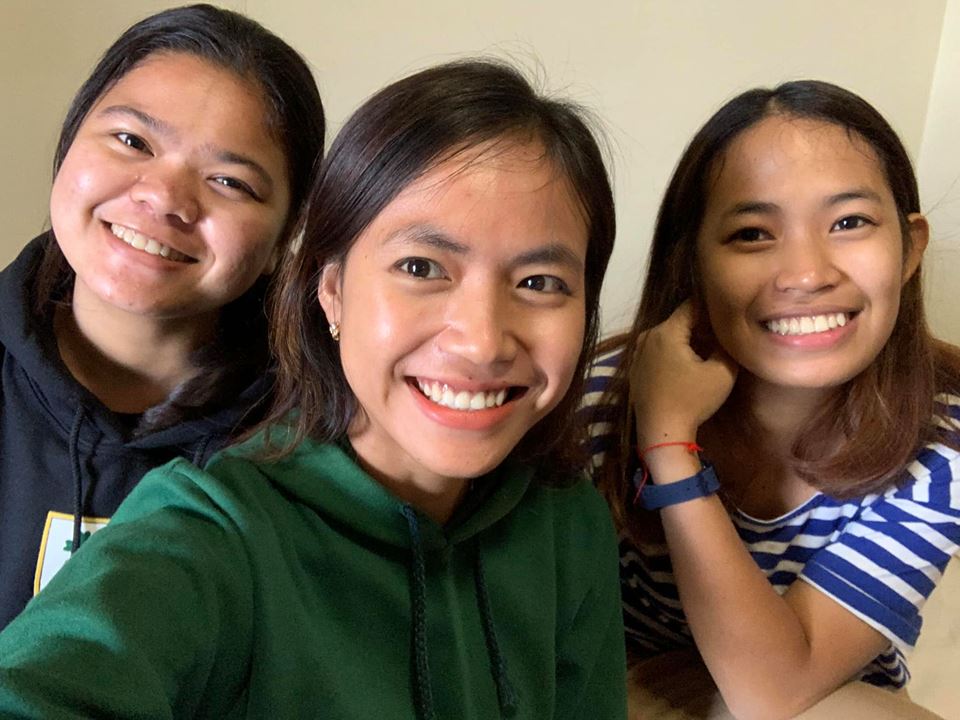 It will be a big jump from home in a small village in an impoverished area of Phnom Penh to the bustling city of Melbourne. But Vannita is taking it all in her stride. She’s excited and looking forward to the adventure, even the colder Melbourne weather, and the inevitable step up in educational demands. ‘I never could imagine when I was younger that I could go to university abroad,” she says. “But I think that I am confident enough. I can go out there and meet people and make friends.” And it started with English classes in the CC bakery all those years ago. Had she not persuaded her mum to go and then joined CCF, Vannita is only too aware how different her life could have been. “I cannot imagine my life if I didn’t join CCF at that time,” she says.. “I’m not sure I would have gone to university. Because the environment [of CCF] has had an effect on how I have turned out. There are so many opportunities for students to improve. “Every day, I am really thankful to CCF a lot.” 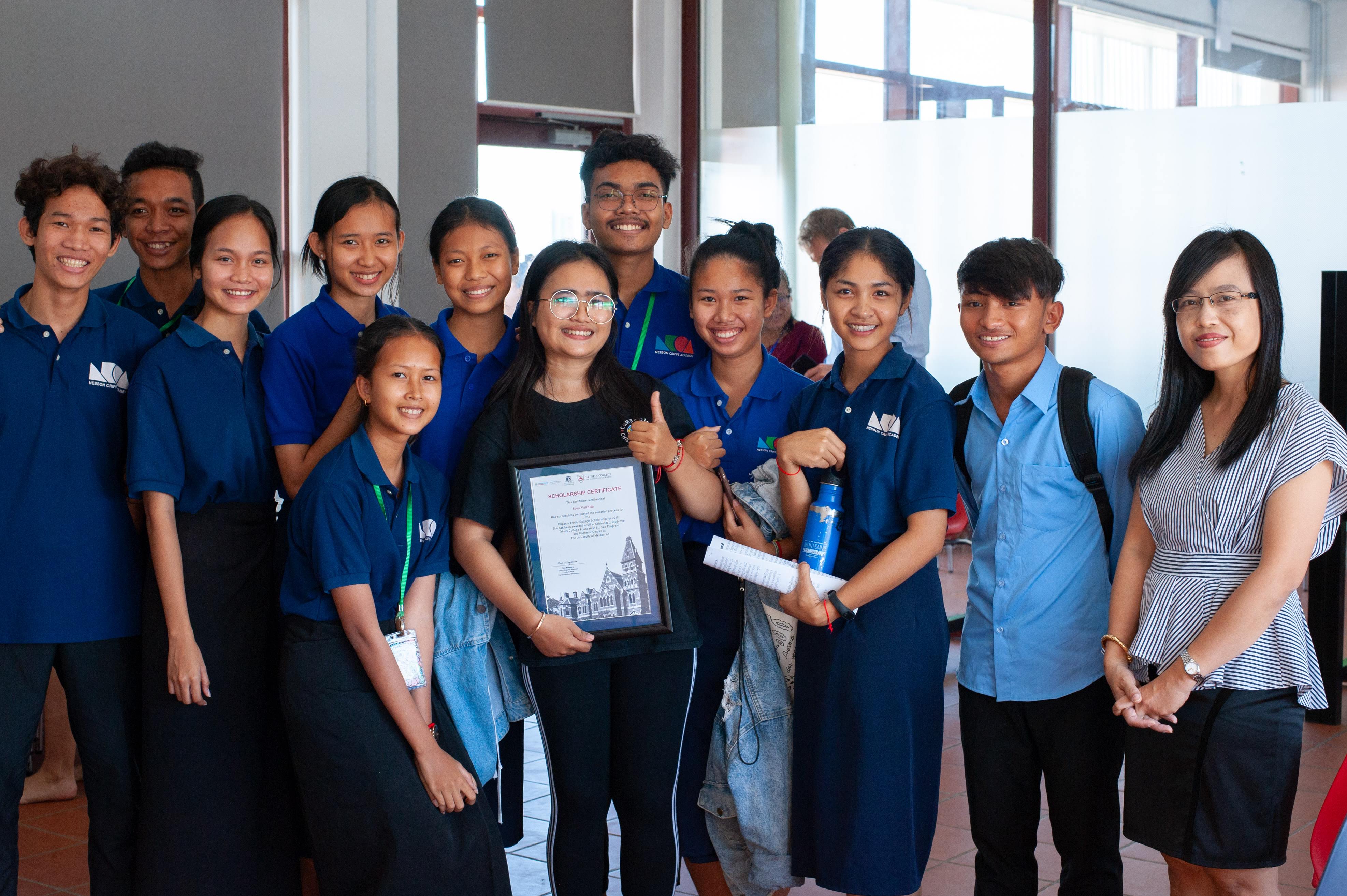