Juggling being a mum with a full-time job in CCF’s Sponsorship Team, Sibony has also been hands-on helping out during the COVID crisis

Delivering emergency packages to children and families who might otherwise go hungry has been vital work for CCF’s team during the COVID crisis in Cambodia.

Among those handing out aid in CCF’s communities, which were reliant on these deliveries of food and other supplies to survive, was Ken Sibony. 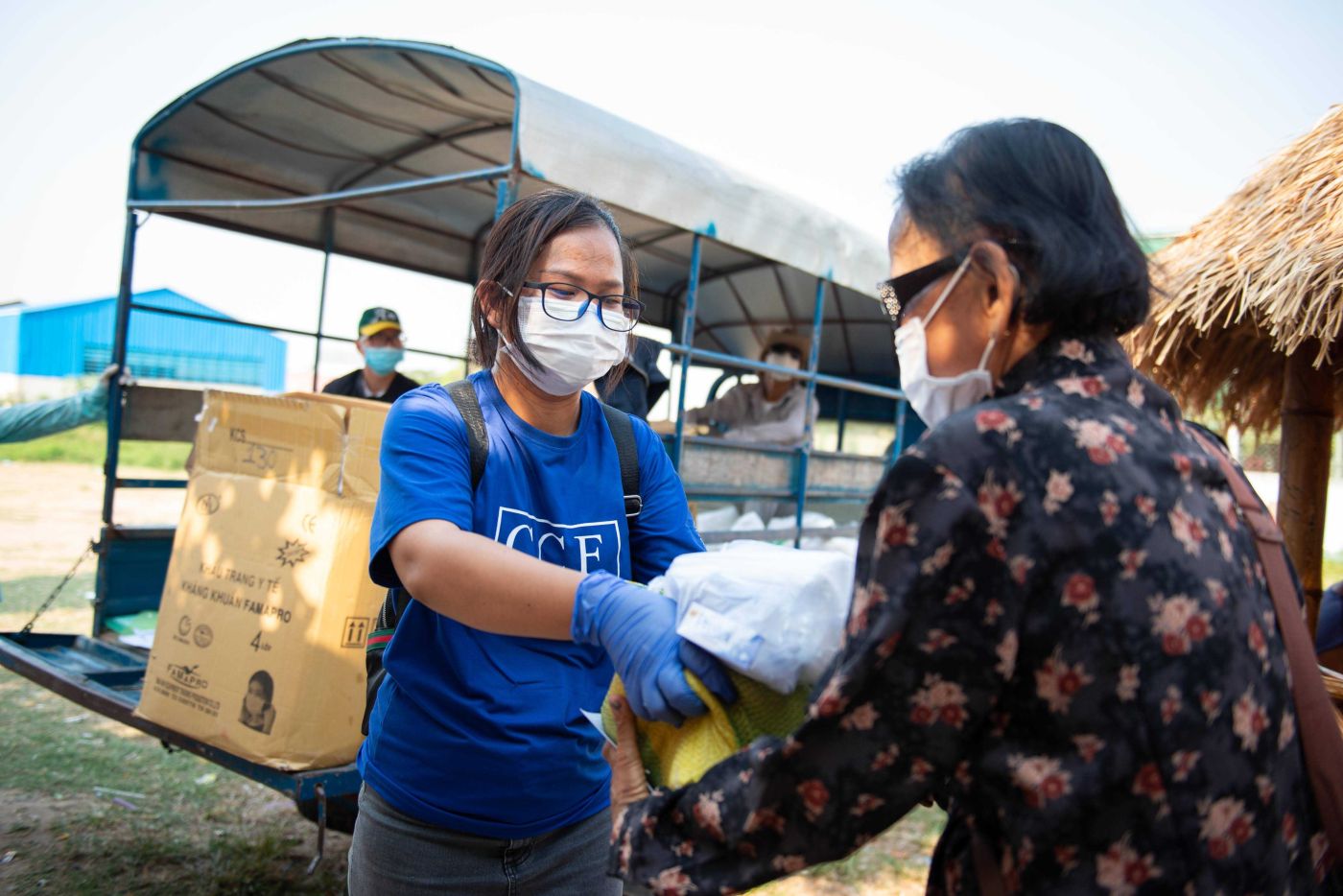 Bony handing out relief parcels to a CCF community member

It’s not part of Sibony’s job. Usually, she can be found in the office in her role as Senior Sponsor Relations Supervisor, managing a team and overseeing communications between sponsors and CCF children. 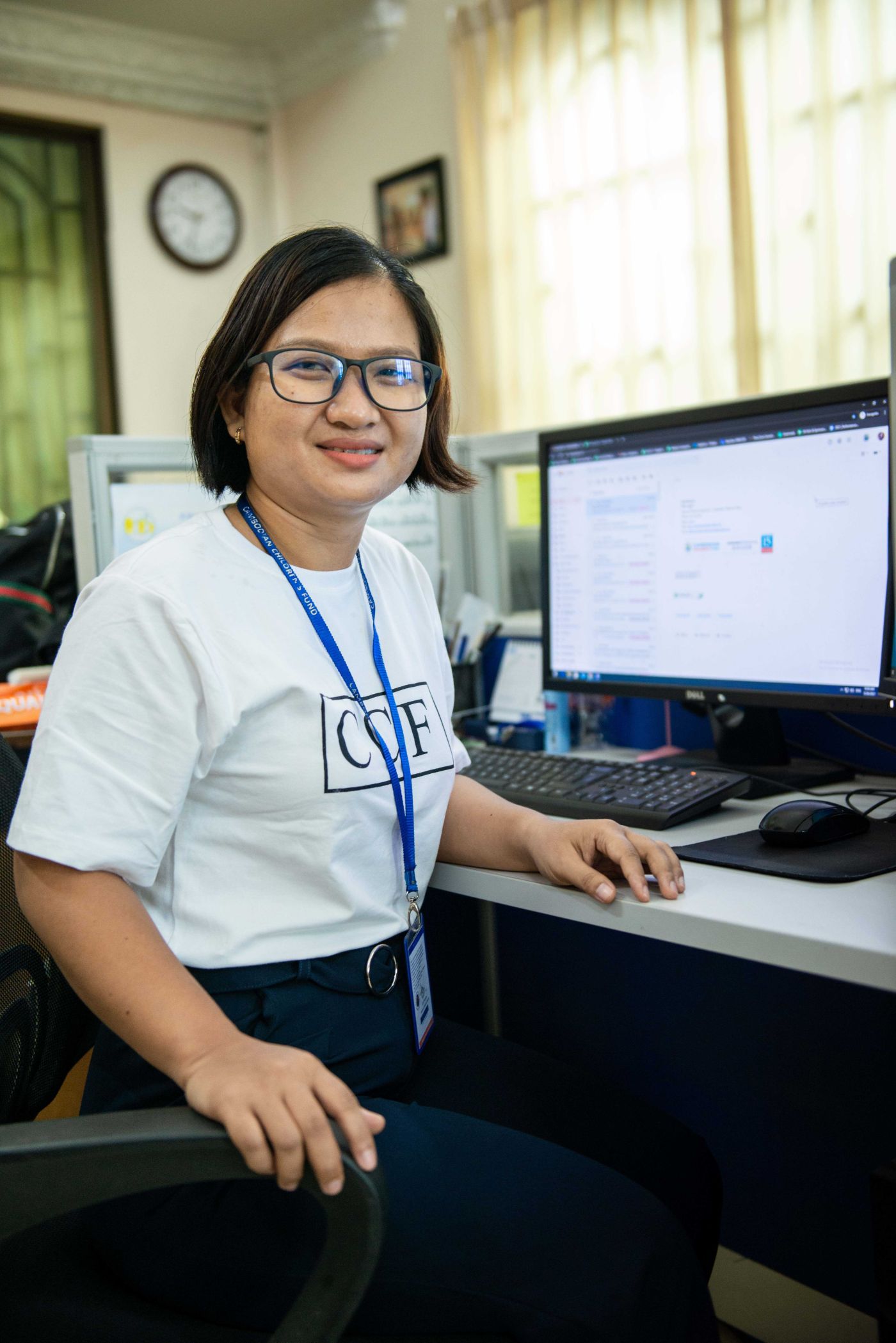 Bony in the office

But she was one of many CCF staff who volunteered to go out on the ground as CCF mobilized an urgent emergency response to reach vulnerable families. 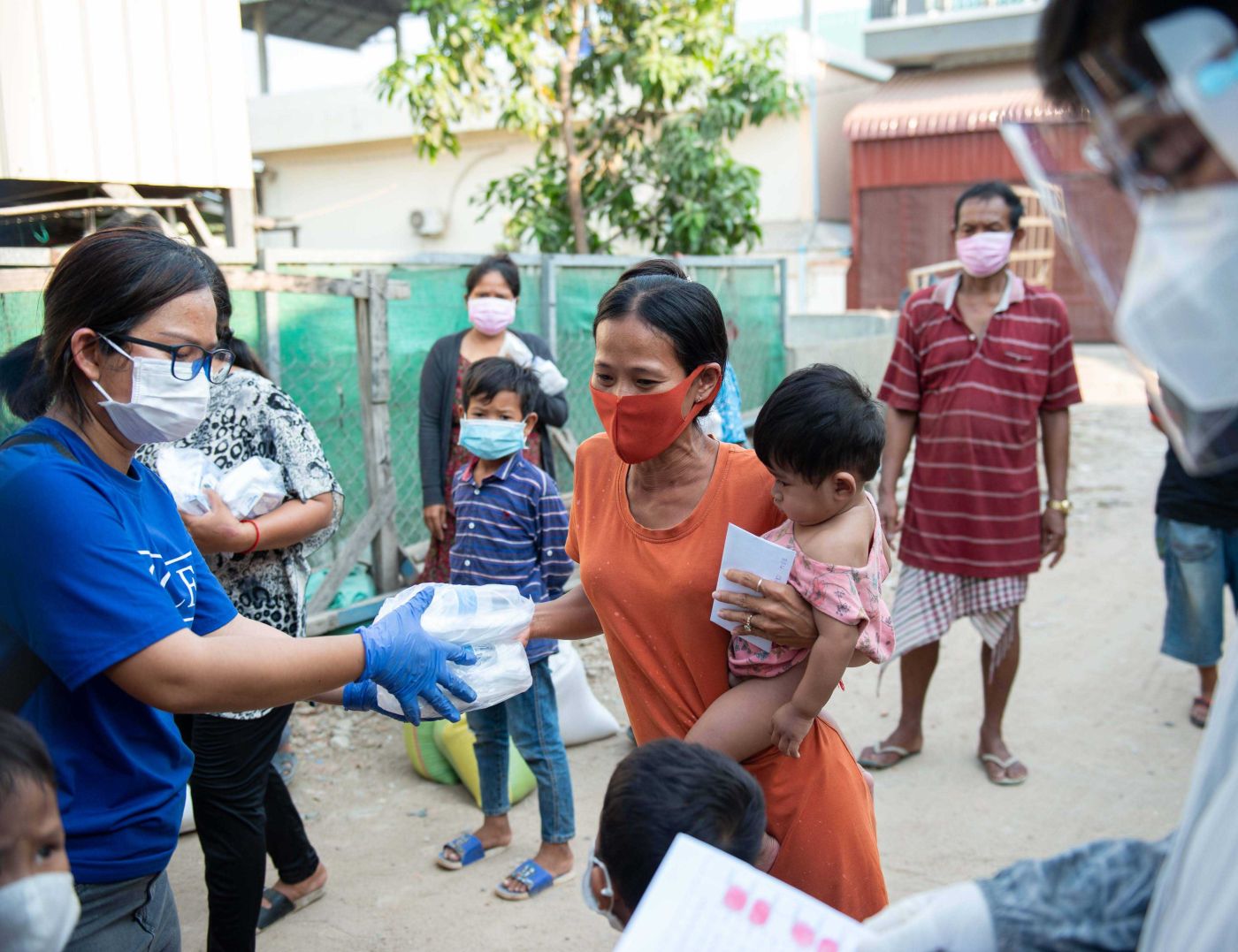 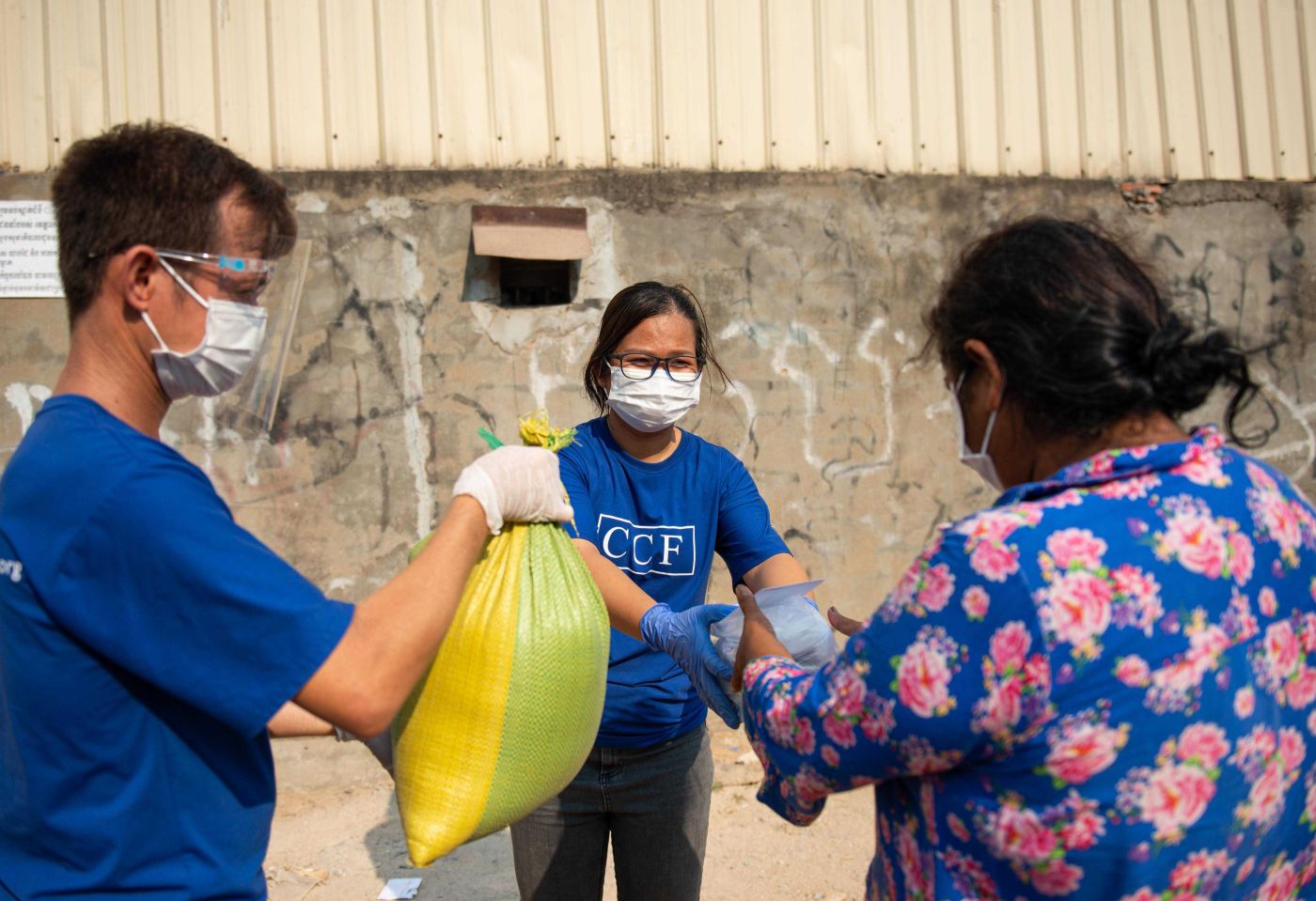 She handed out parcels over Khmer New Year - when families traditionally visit relatives to celebrate - and made sure CCF students received their distance learning packs as schools remained closed.

I feel challenges but our communities, the poorest people in the country, face challenges even harder than me.

After a full working day, Sibony - known as Bony by colleagues - faces an hour commute on her moto back to her home on the outskirts of Phnom Penh, where her two-year-old daughter is waiting.

Bony’s husband, a nurse, is working in the province, 280kms and a six-hour drive away. So Bony is caring for her daughter, with the help of her parents, while juggling work, still answering emails in the evening, and working if needed.

She’s one of CCF’s remarkable staff who is going above and beyond in times of need to help others, and in Bony’s case, leading from the front.

“I always think of someone who is experiencing things harder than me,” says Bony, explaining her motivation.

“Being a team leader, I have to feel more and experience more.

“I feel challenges but our communities, the poorest people in the country, face challenges even harder than me.

“No matter how hard the things I face, I can still eat, three times a day, while others in our communities still do not have enough food.” 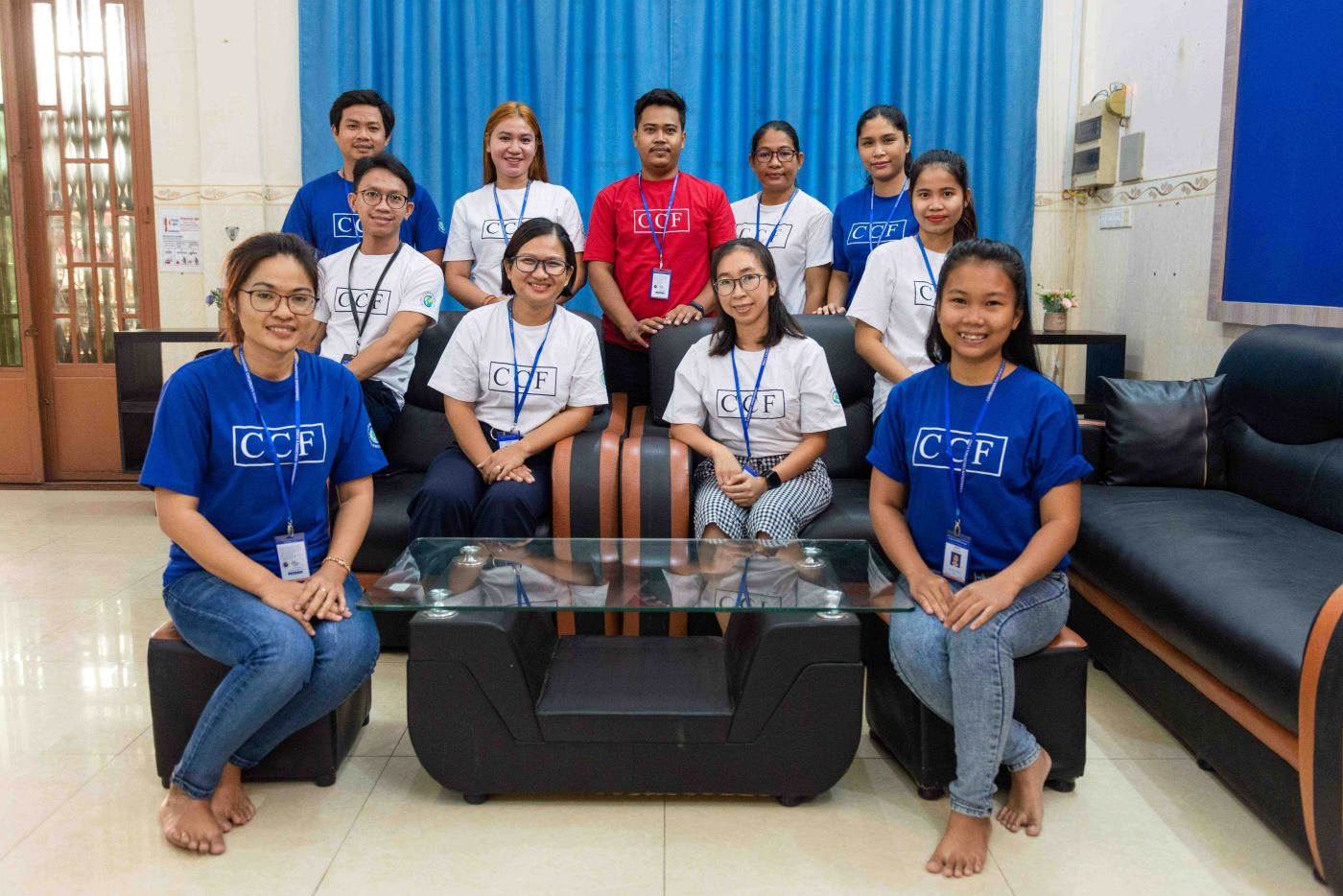 Dynamic and driven, Bony, 31, is full of energy but suffered ill health as a child, spending time in hospital, an experience which has given her empathy and insight into the problems suffered by CCF’s communities.

Being a mother, Bony is used to multitasking and keeping a cool head and calm manner in difficult situations.

With two degrees and a Master’s, she has worked incredibly hard to reach the position she is in now.

Having an unflappable personality and caring nature may well have influenced her decision to study nursing as her first degree.

The profession does run in her family - her father is the head nurse in the ICU at Khmer Soviet Hospital in Phnom Penh, while her husband dispenses medicines to health centers across Battambang. With the COVID outbreak in Cambodia, he has been seconded to work in a quarantine centre.

Bony has her own experience of being on the other side, as a patient.

When she was around five years old, her parents divorced and her mother moved back to her home province of Kampong Thom. It was a difficult time, adjusting to rural life with little income. 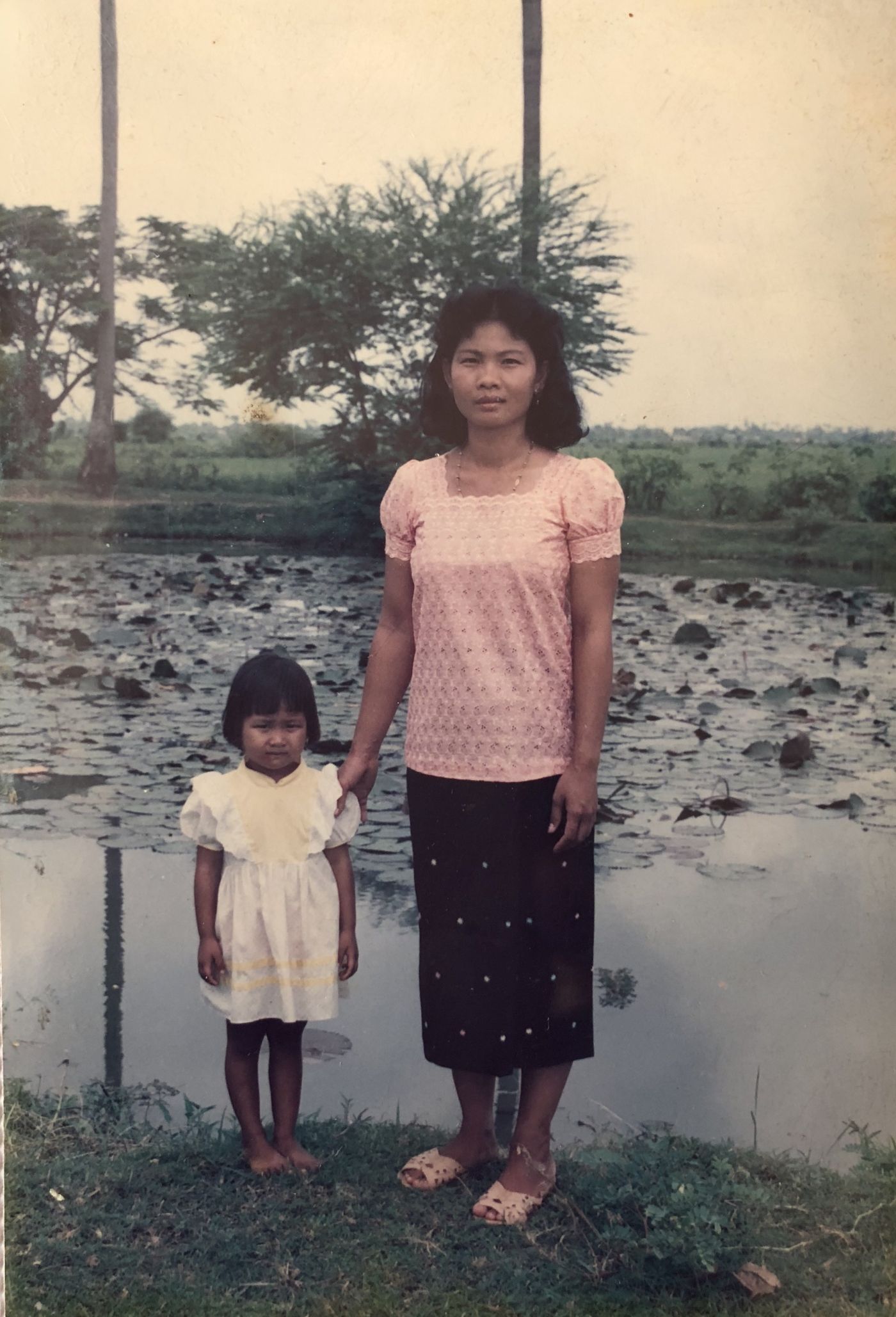 Bony aged around 5 with her mum in the province

Bony began to suffer from health problems and was taken to Phnom Penh for treatment at the hospital where her father worked. She stayed in the hospital for more than a month having treatment.

“My health was quite weak. My parents told me that I often got sick, I had Dengue fever and later appendicitis. One week before my semester exam in Grade 9, I had to have my appendix out,” says Bony.

It brought the family closer together again and Bony’s parents reunited. They are still together now.

Bony, the second eldest of four children, later attended public school and her mother supported her to study English.

After graduating high school, she got a scholarship to study nursing. At the same time, she undertook a second degree part-time, a Bachelor of Education in English Language at The Institute of Foreign Languages (IFL) under the Royal University of Phnom Penh Campus, funded by herself.

During the day, she would study nursing full-time and in the evening spend three-and-a-half hours studying for the second degree.

Bony joined CCF in 2012 - her nine-year work anniversary is in August - starting as a Sponsor Relations Officer, before being promoted to her current role. She has been in her current role for nearly seven years.

While working, she continued studying for a Master’s Degree in Development, part-funded by CCF, and proudly graduated in 2019.

“I’m so grateful for this opportunity. It was one of my dreams to pursue higher education and I did it,” says Bony. 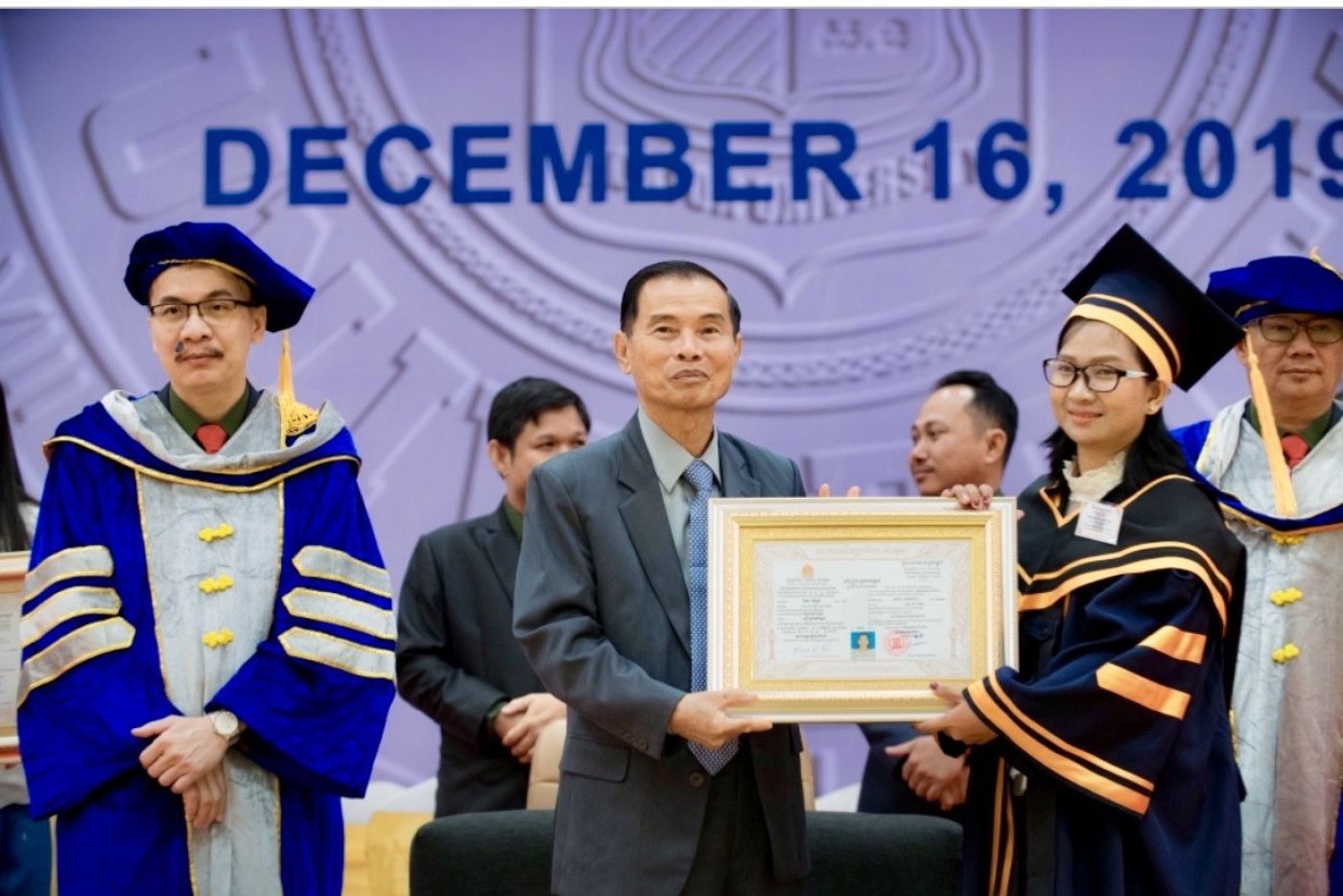 Bony graduating with her Master’s

I feel blessed to be part of CCF, to be able to help others

Intelligent and articulate, Bony is clearly passionate about her work and as committed to CCF now as she was on the first day.

Dressed in a CCF T-shirt, she speaks eloquently about her work.

“Everyone, even my family and friends, think why didn’t you choose a job in nursing, why choose this job? When I joined CCF, it inspired me to work for what I want. It’s been another of my dreams to work for an organization helping our Cambodian children, the ones who come from a poor family.

“From day-to-day, it keeps inspiring me to be part of that. The self motivation is kept alive, it keeps me here after nine years now.”

“I feel blessed to be part of CCF, to be able to help others. What I can do as a return is to work hard and be a good role model for the team that I work with.”

Bony herself has been inspired by strong female figures and role models in her life: her mother and grandmother.

Both women were unable to access the education that Bony had, opportunities for schooling for girls in Cambodia were limited at that time, and during the Khmer Rouge regime, and wanted better for her.

“My mum, who was a fruit seller, could only study up to Grade 9,” says Bony.

“But she inspired me to study and do as well as I could.

“My grandmother has not had an educated life. Nearly 80 years old now, she worked hard as a farmer to support my life.

“She motivated the grandchildren to study hard. I also learned about kindness and being kind from my grandmother. Whenever I visit, we bring her food and although she does not have much herself, she will give some to a poor neighbour or old people. She says we cannot eat it all, we will share.”

Now, in turn, Bony wants to strive to be a good role model for her own daughter, Vatey (known as TeyTey), pictured as a baby and recently, who will turn three this month (June). 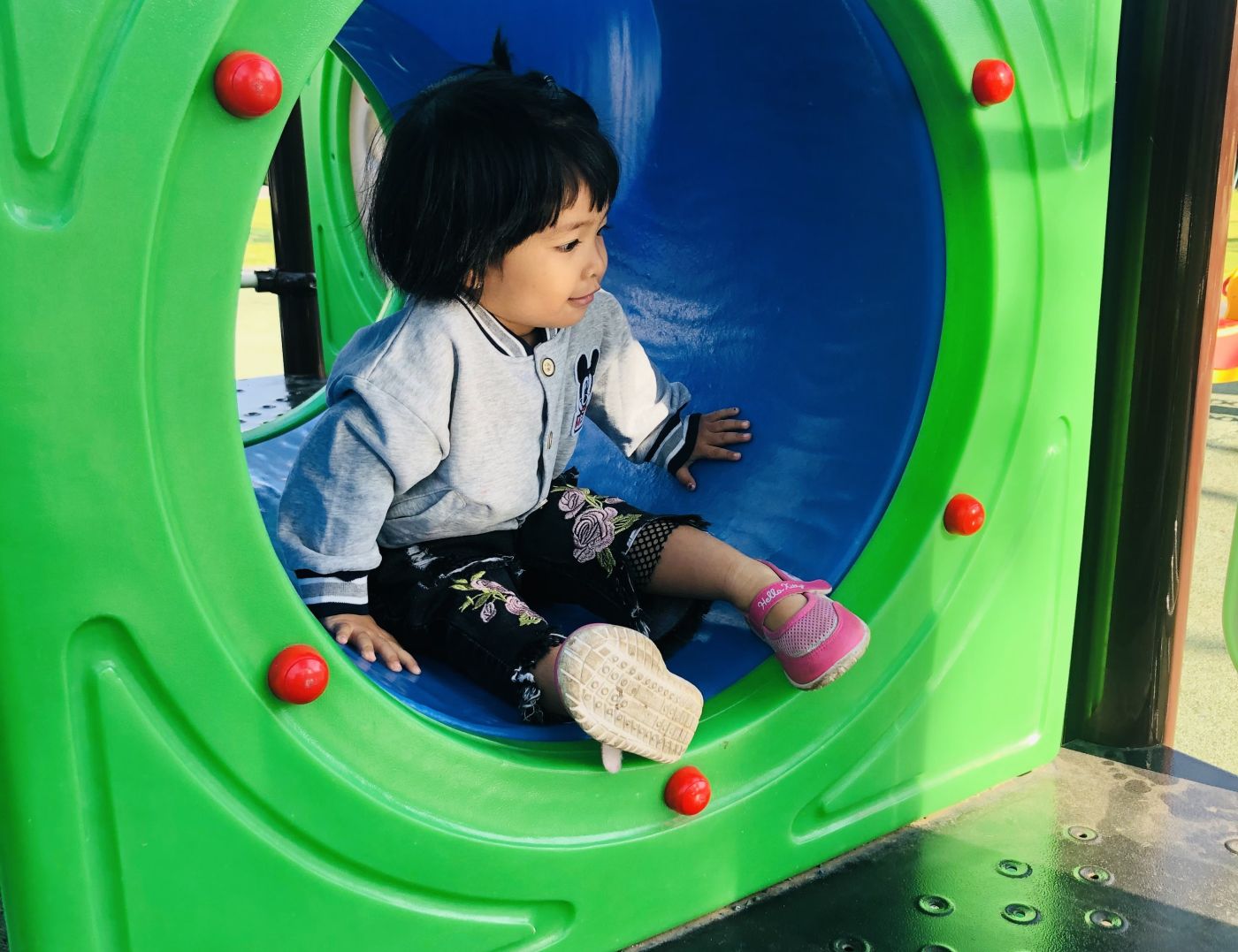 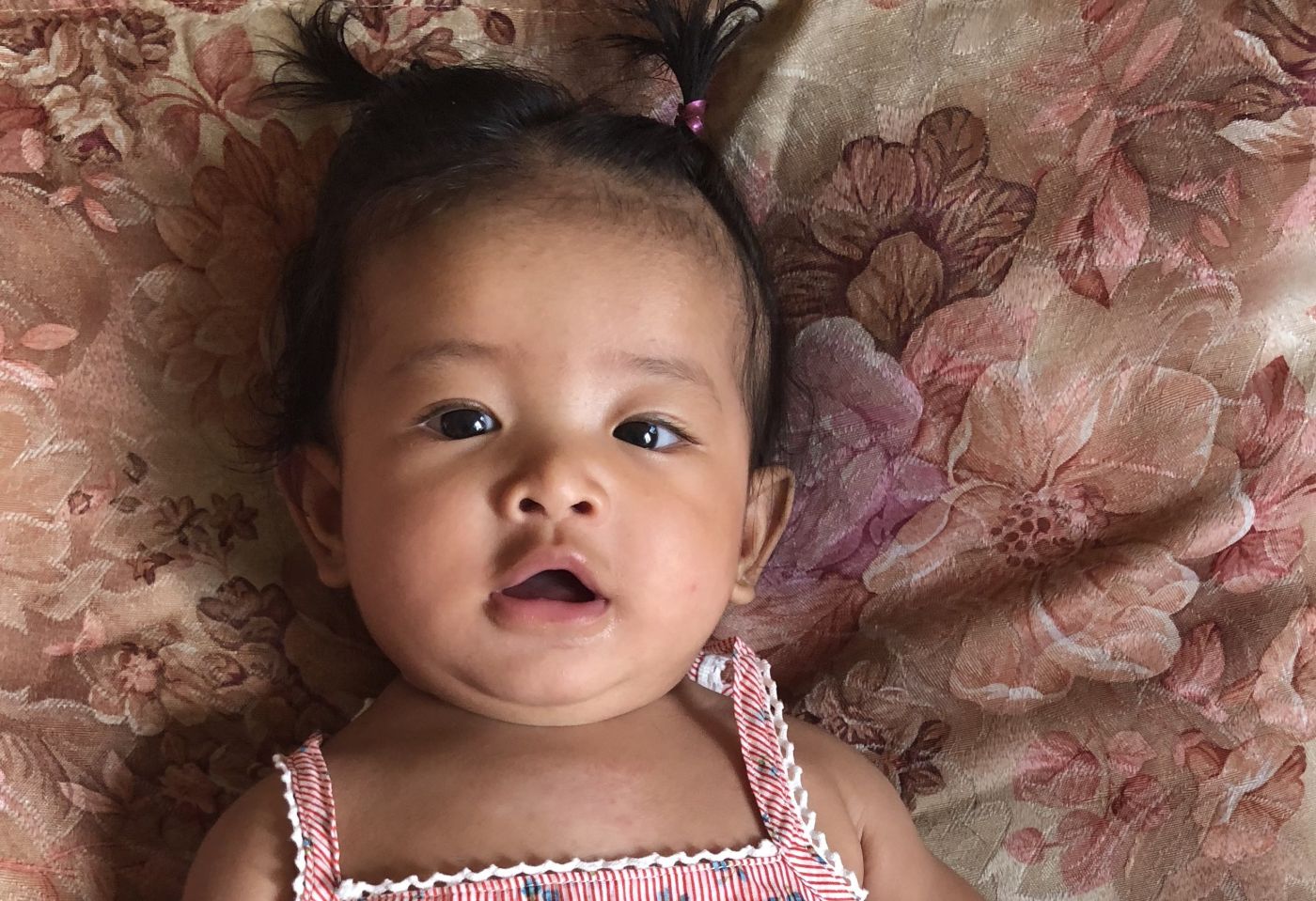 “I want to give her the best we can, and hope that she has good health,” says Bony.

“I value how important education is, no matter what gender we are. and so I hope I can support her so that she can go to university and finish her degree.

“I hope I can be more motivated and be a good role model to her.”

Bony lives with her parents who support her and help take care of TeyTey when she is at work.

Due to COVID lockdowns in Cambodia, Bony has not seen her husband for four months but they keep in touch by phone and video calls.

All that has happened in my life makes me stronger and I keep learning,

Her family remains close. The eldest brother, who dropped out of university in the second year, lives in the province with her grandparents, while her other brother graduated with an IT degree and works for a private company. The youngest, a sister, is in Grade 10 at high school.

While she has achieved a lot already, Bony is determined to achieve more, which includes becoming a mentor to other young Cambodians in the future and travelling overseas for the first time.

“My strength is being consistent in what I’m doing, in my work and my personality, she says.

“Education is important but I also believe that we need to behave with a good personality, be open to new experiences and keep learning along the way.”

With a voracious work ethic and will to overcome challenges in her past and future, Bony seems likely to succeed at whatever she sets her mind to.

She simply says: “All that has happened in my life makes me stronger and I keep learning,” 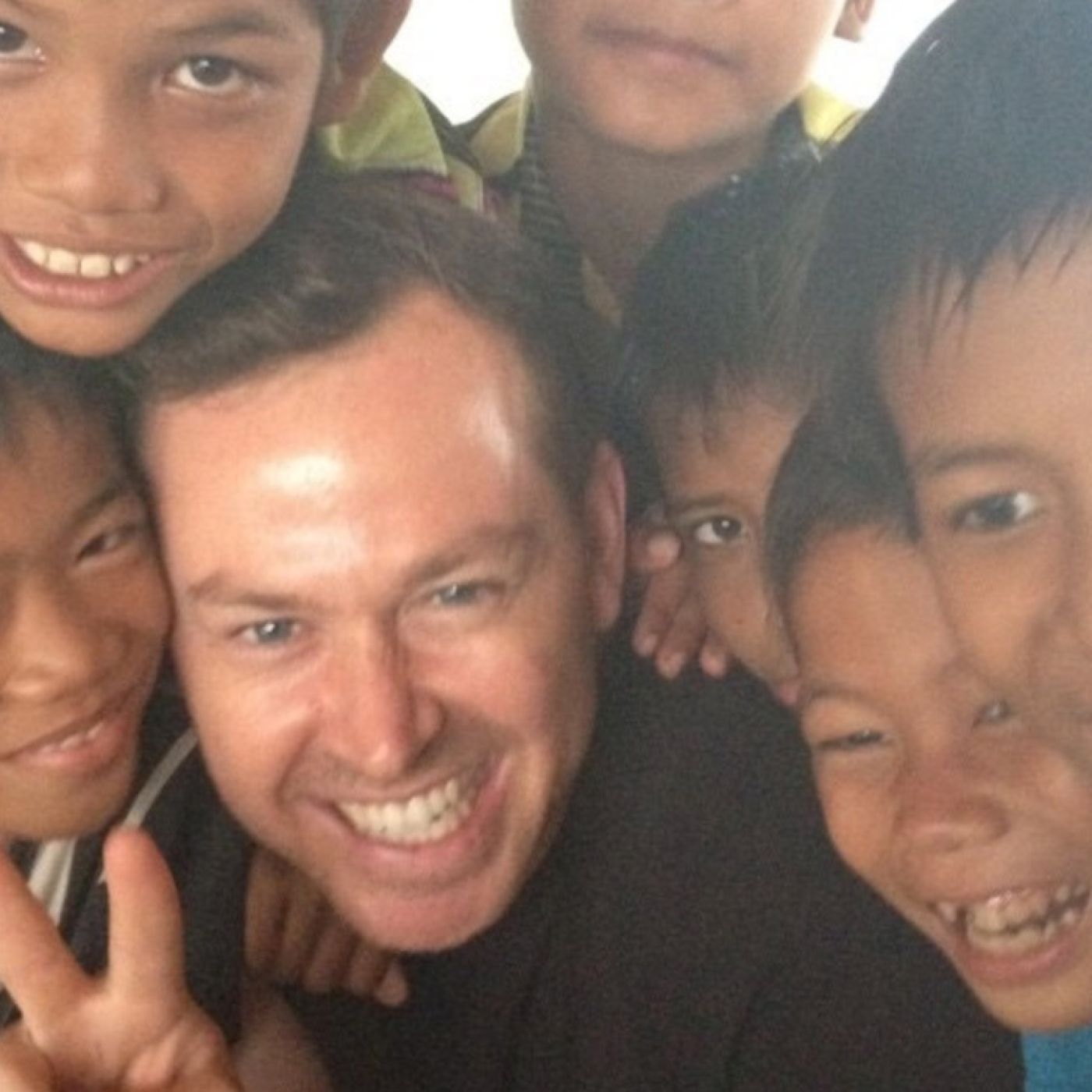 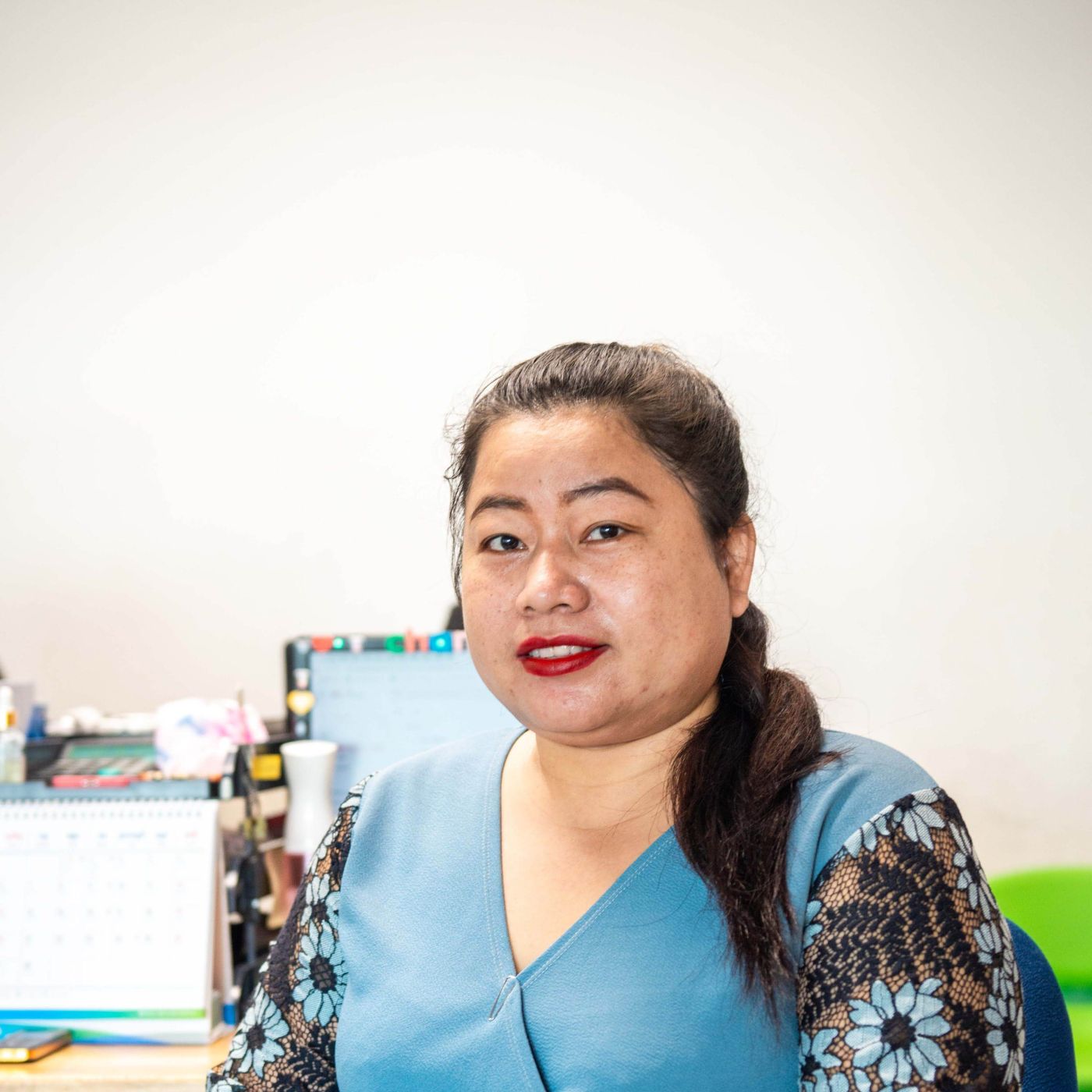