From scavenging through rubbish as a child on the streets of Phnom Penh with little chance of going to school, Thayheng Nhem is now studying for a Master’s in France on a full scholarship, the latest chapter in his CCF story

Walking through the doors of his new college at the start of the academic term, Thayheng Nhem experienced the same emotions as all the other overseas students; nerves and excitement at the opportunity before them, beginning a new life in a different country. 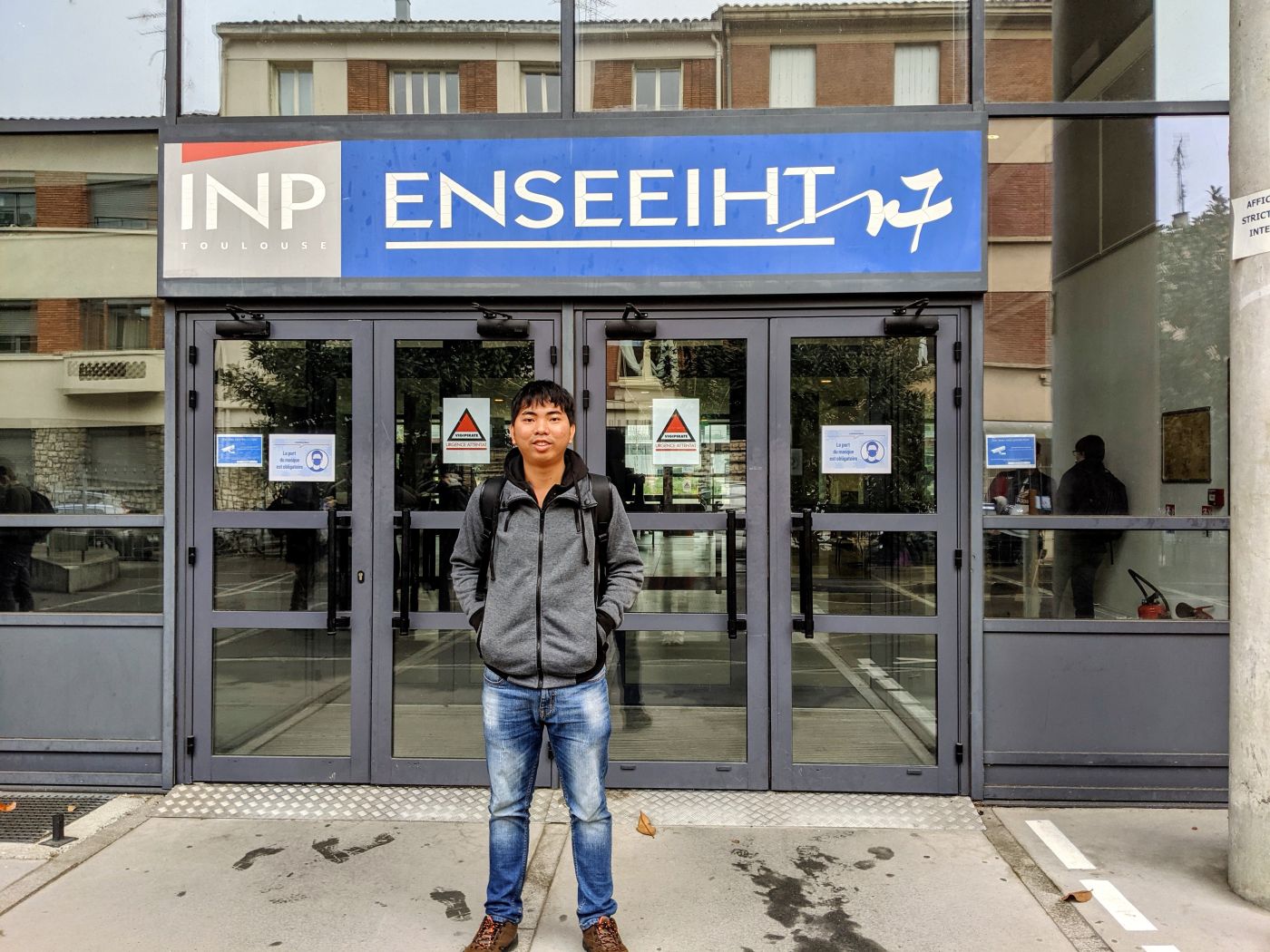 What makes Thayheng standout from the other students at the Institut National Polytechnique de Toulouse, however, is the journey he made to get there, a triumph over the odds.

At the age of eight, Thayheng was scavenging through rubbish around Phnom Penh’s city dumpsite in Steung Meanchey with his brother. They spent their day among the dirt and flies trying to find items to sell so the family could survive for one more day.

Back then, Thayheng had no chance of an education with the family too poor to send him or his siblings to school. For families like Thayheng’s the priority was putting food on the table and it was a struggle with four hungry children to feed. Faced with feeding their children or sending them to school, the parents had no choice.

Breaking free from this cycle of poverty that trapped many families in the impoverished community of Steung Meanchey seemed an insurmountable task. Surviving only on meager earnings from working on the rubbish dump - as little as US $2.50 a day - families had no option but to end up saddled with crippling debts to get by and afford basic necessities such as housing, food and healthcare. 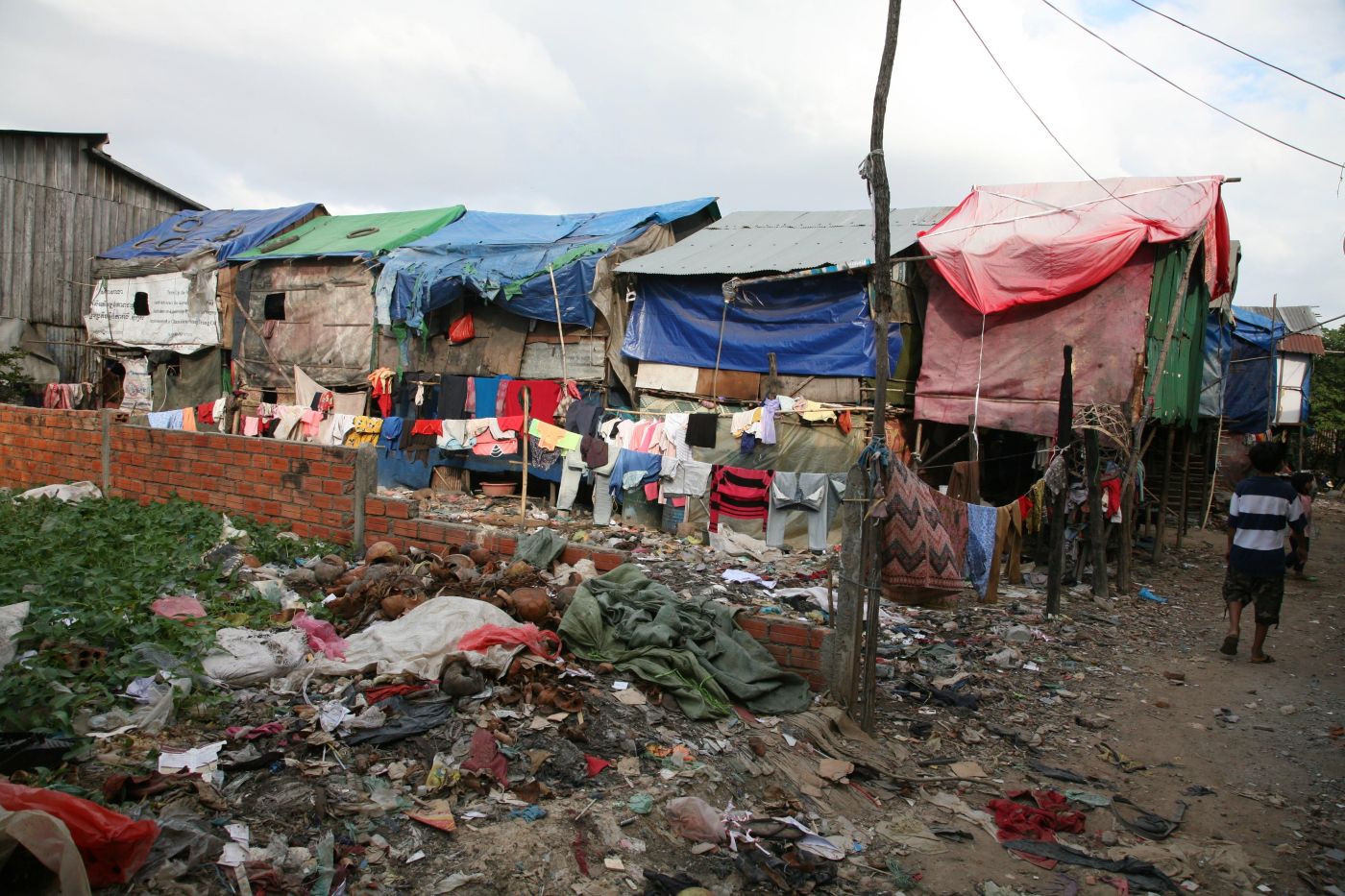 Some children and families never made it off the Steung Meanchey dumpsite, destined to a life of deprivation and despair.

Thayheng was one of the lucky ones. Rescued by CCF, he got his wish to go to school, study at university and travel abroad.

Now, at the age of 24, he has moved to France to study a Master’s in Network and Telecommunications after being awarded a full scholarship through the French Embassy in Phnom Penh. 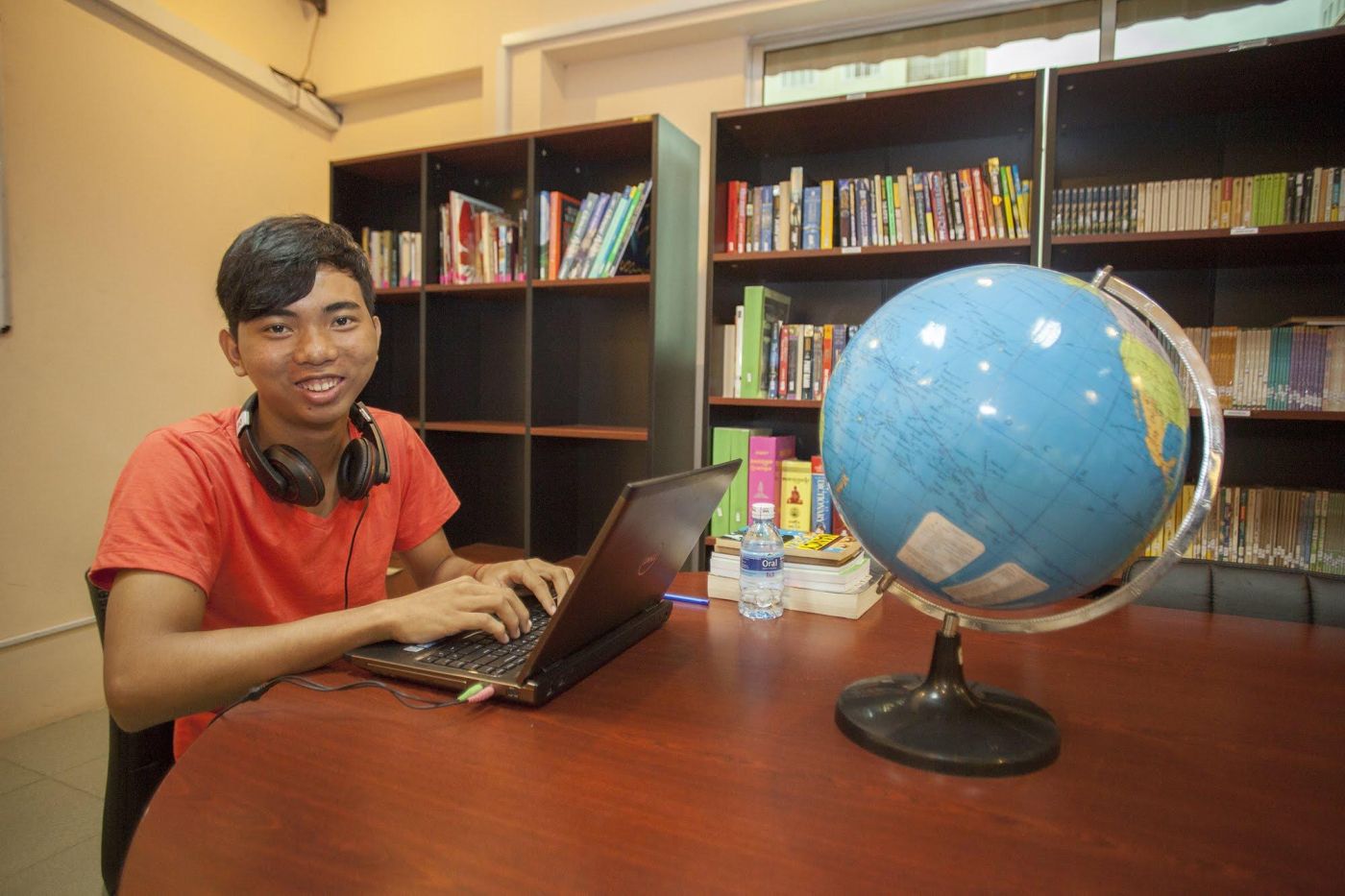 Coming to France to study is such a wonderful gift to me. It means so much to me as it has always been my desire.

“I’m aware that if not for support from CCF, this dream of mine would be unbelievable. I have been with CCF since 2005 and back then, I really could not dream of standing here when I am today. CCF gave me hope that I could grow as much as anyone.”

After four months, Thayheng is still settling into his new life and finding his feet academically and personally. Leaving family and friends behind in Cambodia was difficult but realizing his potential drives Thayheng on and technology - the subject he has chosen to study - means he can keep in touch with those back home.

Part of his motivation also comes from remembering where he has come from.

“It was a very tiring job for my parents,” Thayheng remembers growing up in rural Cambodia where his parents barely eked out a living as farmers, struggling to feed their children.

“I went to school for a little, maybe when I was six, but my mum and dad could not [continue to] afford to send me to school.”

Seeking a better life, the family moved to Phnom Penh.

They ended up, as many migrant families from the countryside do, in Steung Meanchey at the city dump, one of the largest and most toxic landfill sites in Southeast Asia at the time. Here thousands of children and adults toiled away night and day at ‘Smokey Mountain’, the nickname given to the landfill by the children due to the toxic smoke that often rose from the mountains of rubbish as fires smouldered beneath the surface. 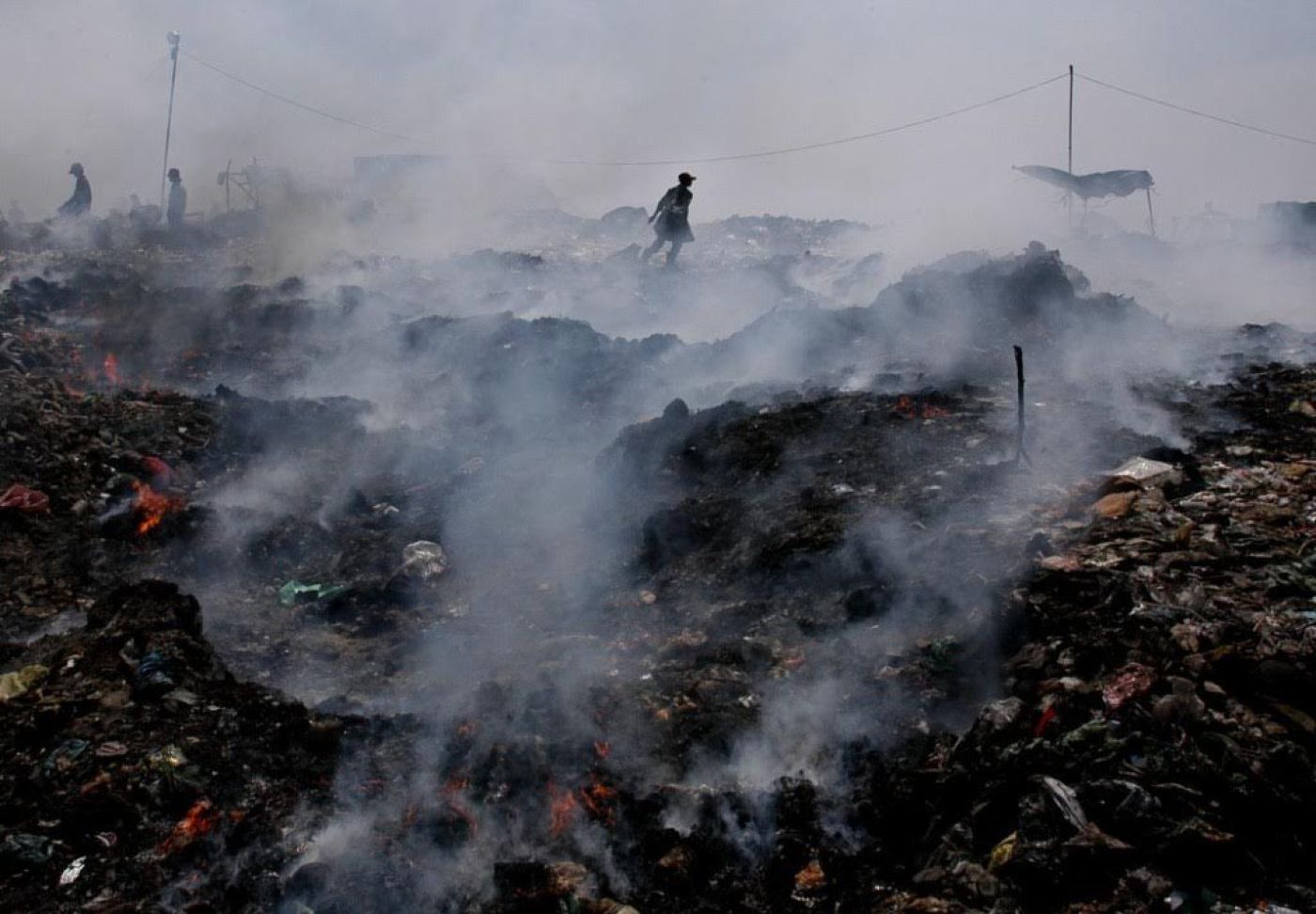 We started scavenging, picking up rubbish and stuff. I was about eight years old at the time.

“My oldest brother and my dad went out scavenging at night and I just did it during the daytime. I mostly collected metal and aluminum cans. It was a hard time for the family.”

There seemed no way out until Thayheng’s father heard about CCF and approached for help - and the chance to give his children an education.

Thayheng and his sister, Seak Eng, the youngest in the family, joined CCF.

Given the chance to learn, Thayheng embraced every opportunity in and out of the classroom. Through CCF’s Leadership Program, giving CCF students the tools to become leaders of change for their communities and country in the future, he began to build self-confidence and a belief that his ambitions were attainable. 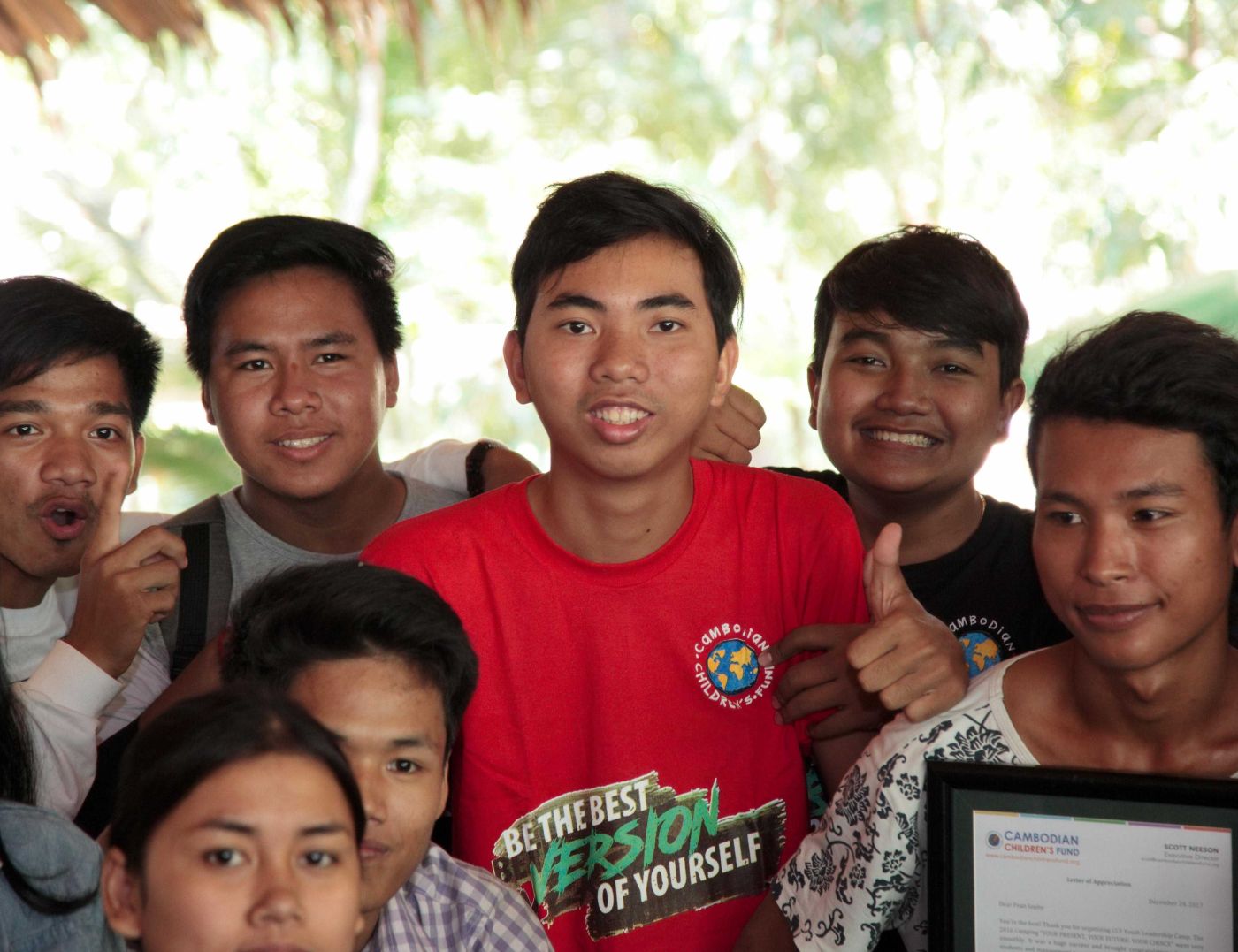 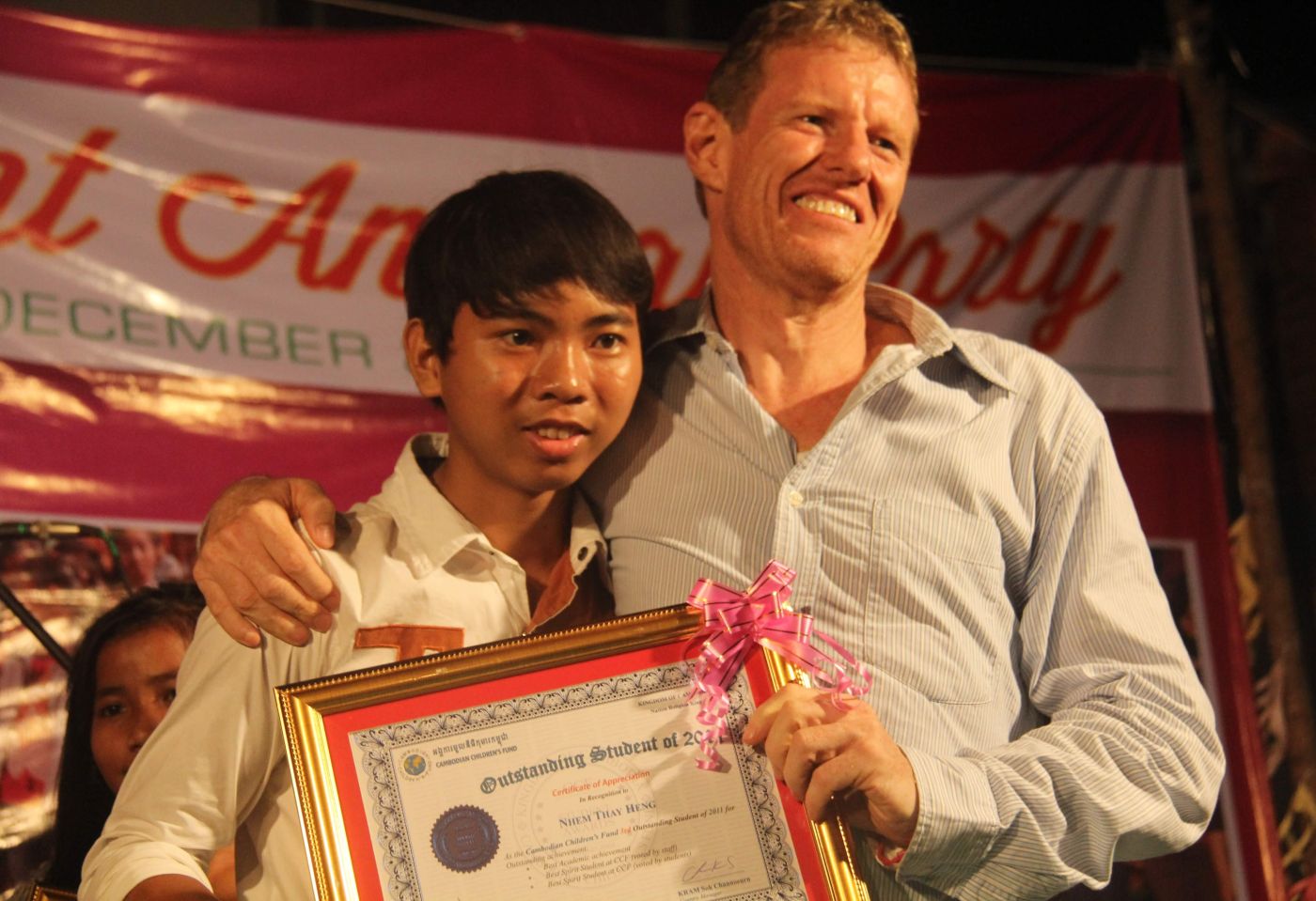 This led to Thayheng being one of the CCF students chosen to attend the Tony Robbins Global Youth Leadership Summit in the U.S. in 2012, fulfilling his dream to travel abroad.

Another goal was achieved when Thayheng got into university in 2015, making his parents so proud.

I feel very happy that I’ve made my mum proud, that’s a really good feeling

Initially studying Civil Engineering, he switched his Bachelor’s major to Computer Science after seeing how technology was playing an increasingly prominent role in Cambodia, creating a need for tech savvy young Cambodians.

“I find technology fascinating; how it changes our lives,” says Thayheng.

CCF supported Thayheng during his full-time degree at the Institute of Technology of Cambodia in Phnom Penh, paying his course fees for the five year program, and providing a housing allowance to live with other CCF university students, and a regular stipend to cover living expenses.

Once a little boy dreaming of just going to school, there was now so much promise within his reach, and the dreams were getting bigger. That included studying abroad - his ambition was always to study in France, drawn by the quality of education, beautiful culture and historical links with Cambodia.

When the opportunity arose for a scholarship in France, Thayheng applied with little expectations. But after a rigorous selection process, he was offered a full scholarship, and accepted onto a one-year Master’s program at the Institut National Polytechnique de Toulouse, which is part of the University of Toulouse, one of the oldest universities in Europe.

He’s now been in France for four months. It’s taken some adjustment - he had never been to France before and could not speak any French - but meeting some fellow Cambodian students also on scholarships has helped him settle in.

“It’s an adventure here, coming from Cambodia and starting up again. It was quite challenging in the first few weeks but I have got used to it and made some friends,” says Thayheng. 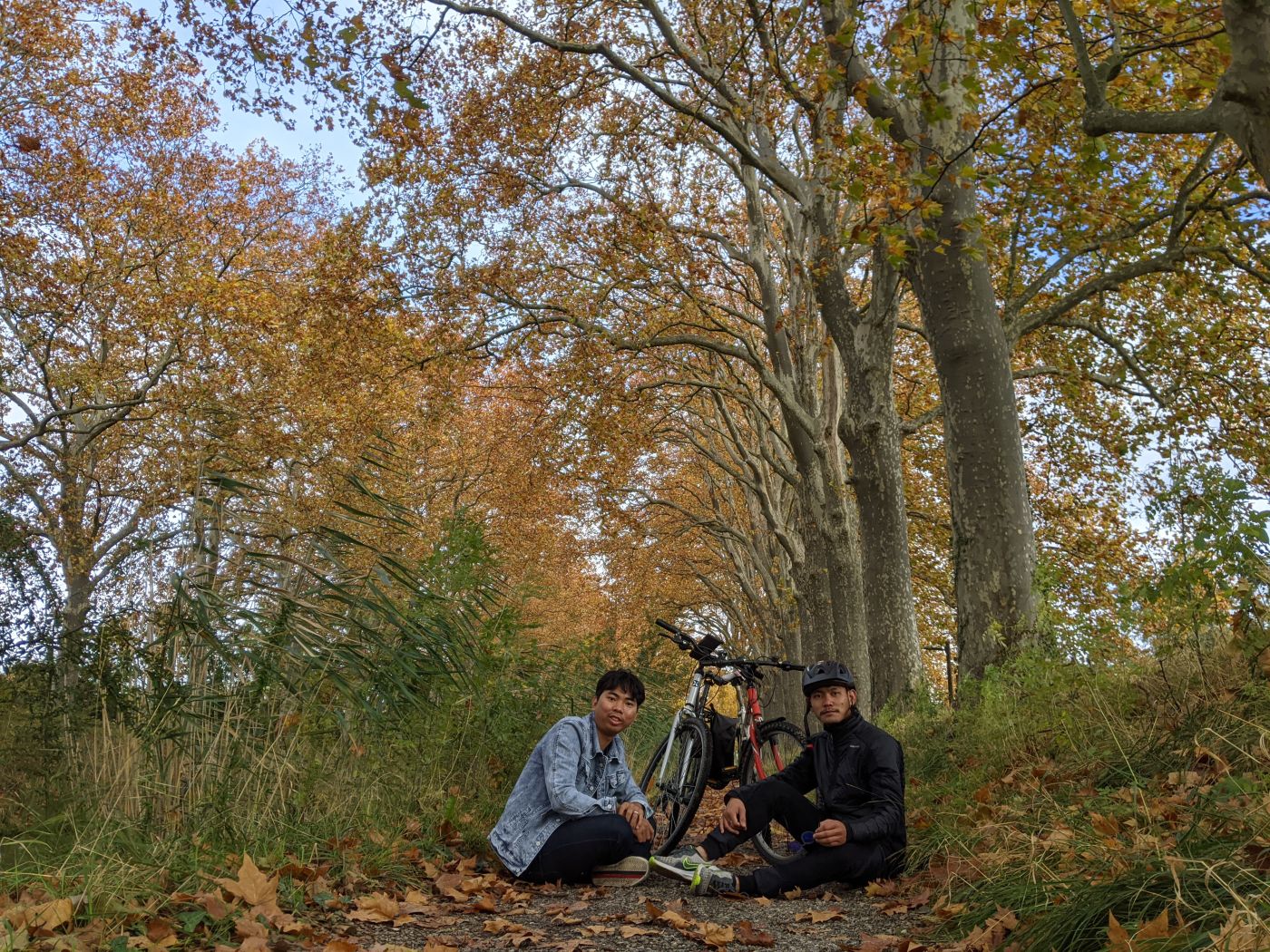 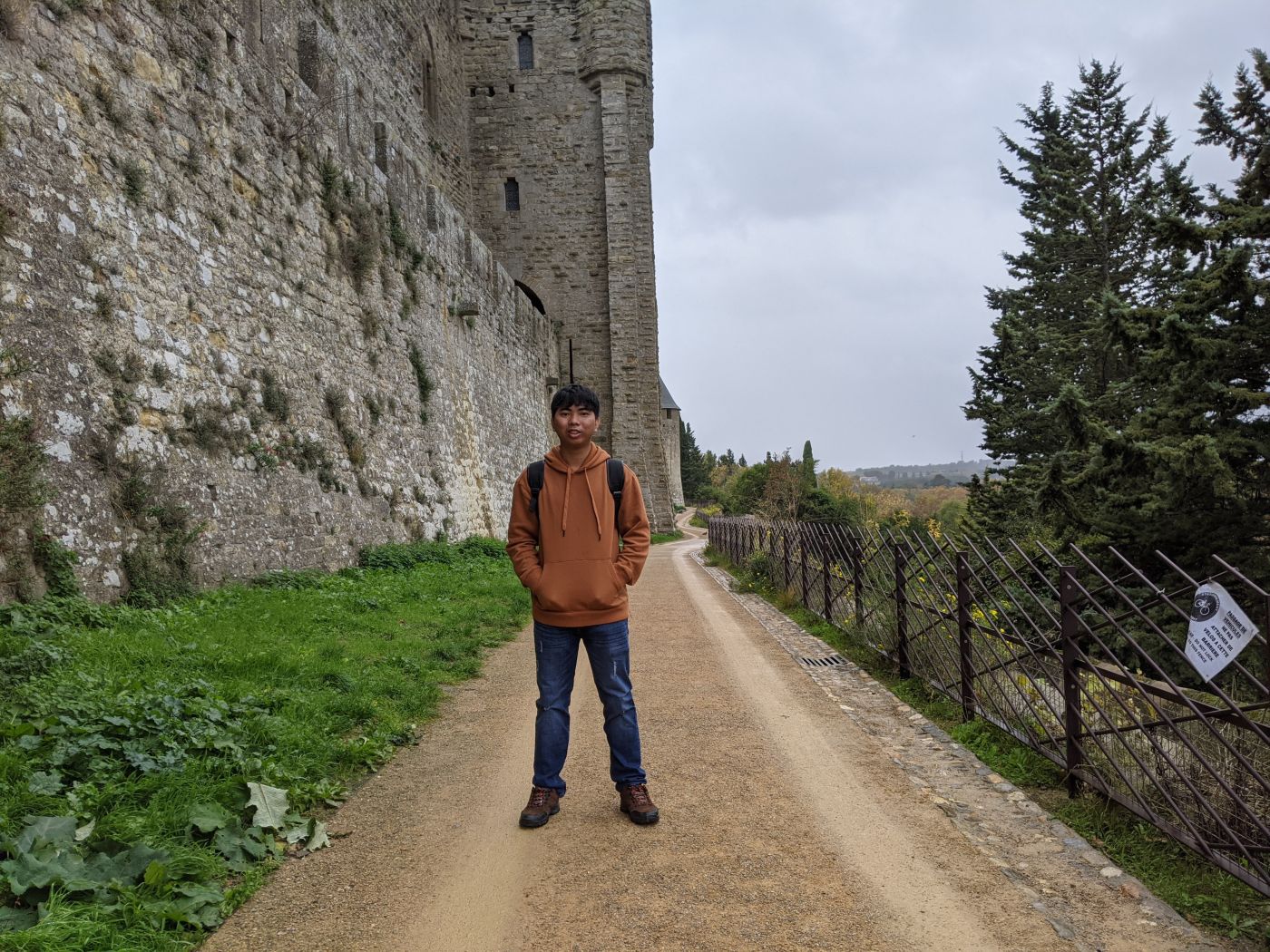 He’s also had to get to grips with the course and new academic system, with the added complication of COVID-19 and a national lockdown in France, which meant most of his studying has switched to online. 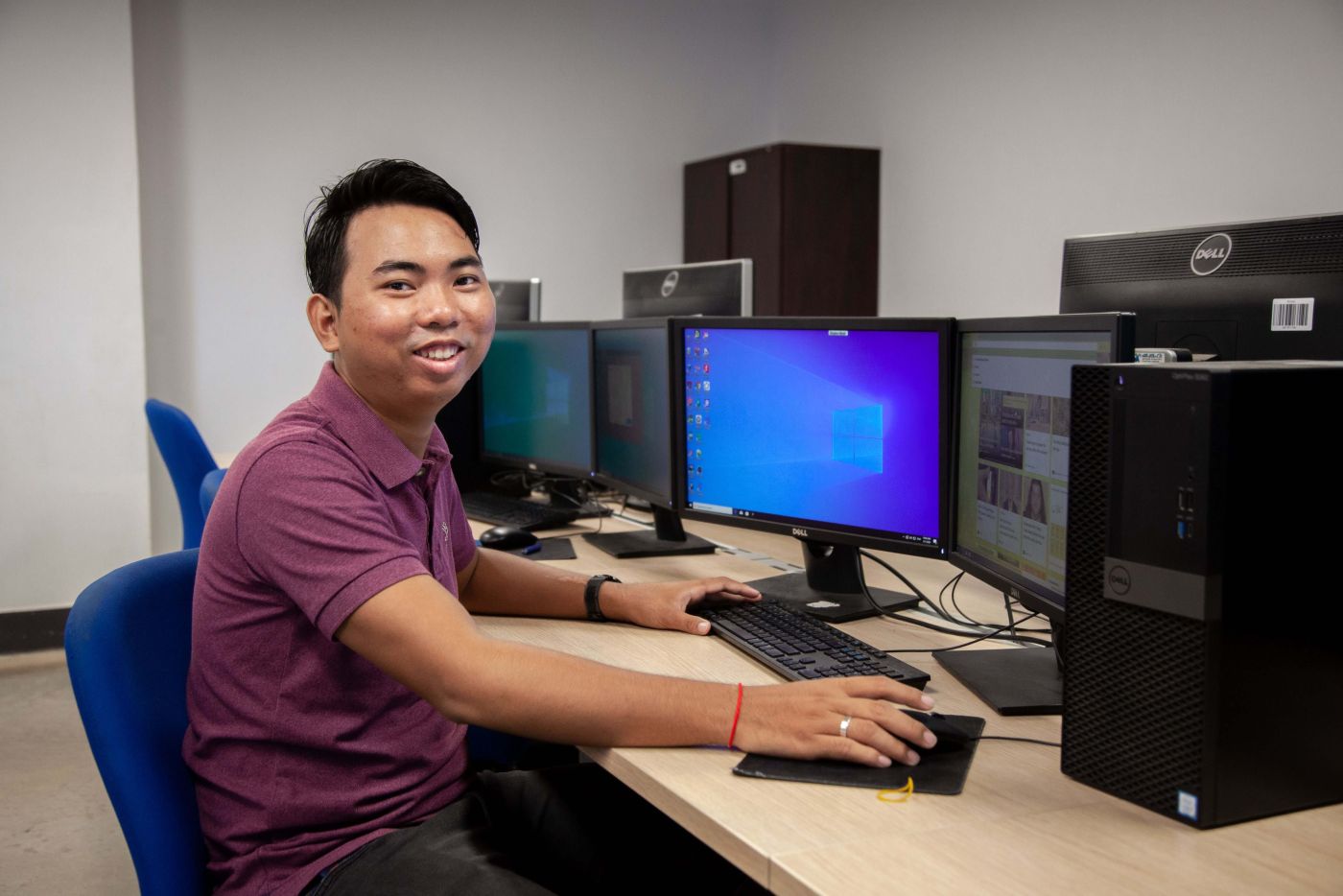 In July, he will turn 25 and celebrate his first birthday out of Cambodia and away from his family. He misses friends and family back home but keeps in regular touch. His parents still live in Steung Meanchey, but they no longer have to scavenge to make money and instead earn a living from their small shop selling snacks.

Incredibly, given their start in life, not only did Thayheng get to university but also his two brothers, who were not with CCF. And their sister, Seak Eng, who is still in CCF’s Education Program and currently in Grade 12 at CCF’s Neeson Cripps Academy, has her sights set on a university place too.

Thayheng also has thoughts about his next step, getting a PhD. After that, he hopes to return to Cambodia and teach at university, passing on his knowledge to others and inspiring the next generation to dream big. 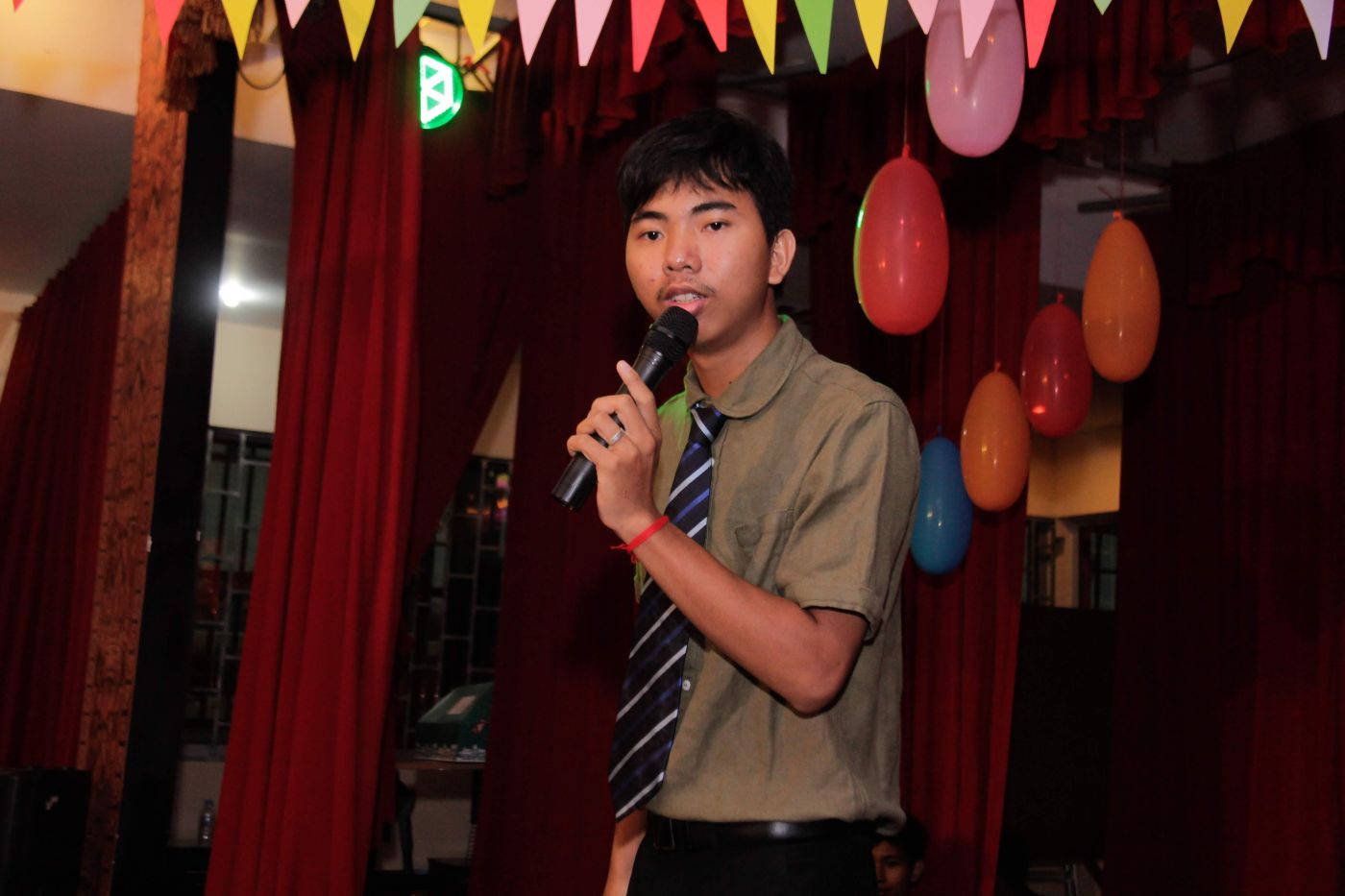 I couldn’t imagine how I would have ended up without CCF, it’s difficult to imagine

“CCF has changed my life so much from a provincial kid to his new me. CCF gave me the tools I needed to lead me to here today. With CCF, I can dream bigger and believe. I see light for my future to come,” says Thayheng. 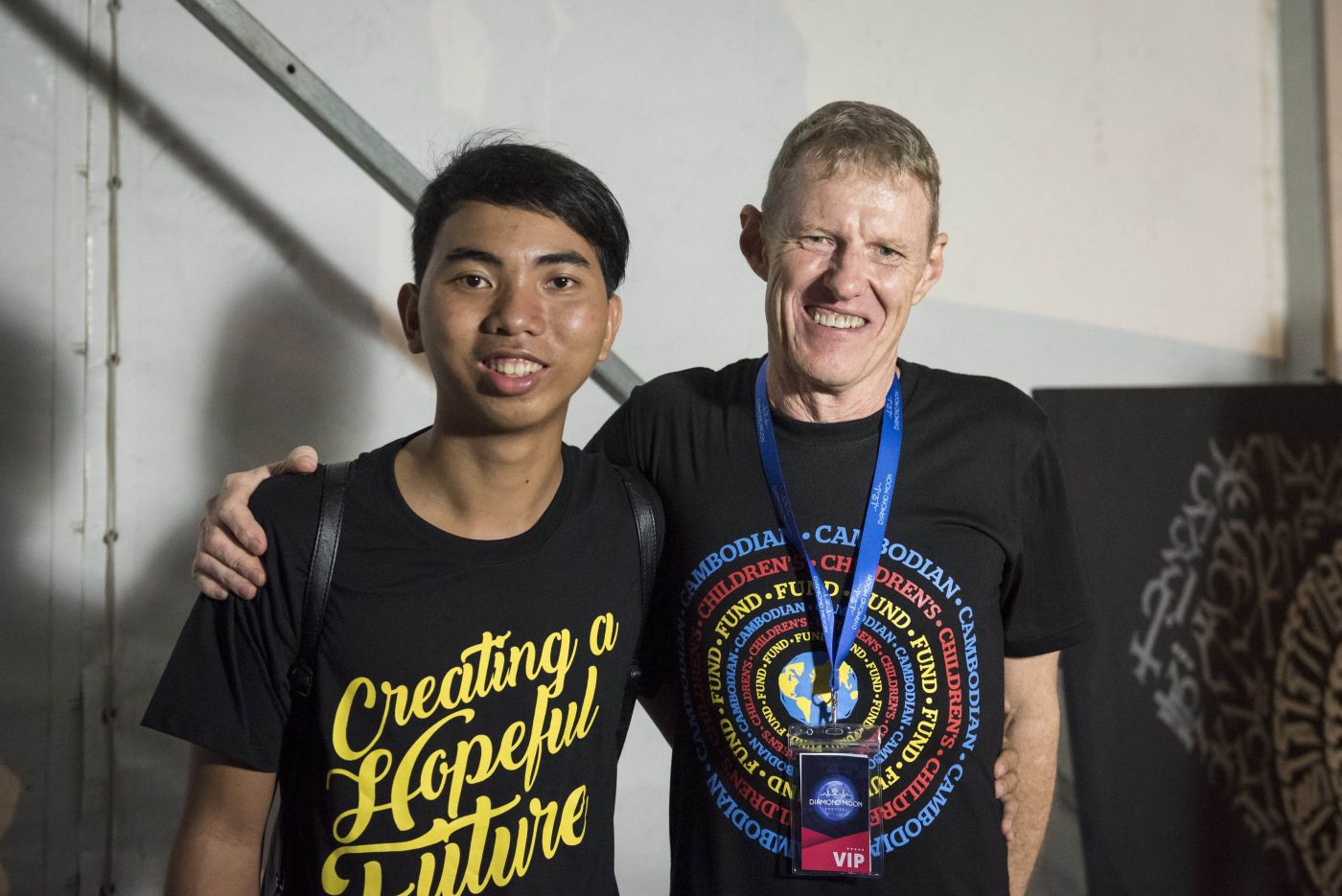 All the best stories from our students, graduates, and CCF family members.