Cambodian Children’s Fund’s Adult Literacy Program has been a huge success since it launched almost three years ago, giving older students the chance to learn "I never learned to read or write. I did not go to school when I was younger. I had no chance because my parents were very poor and I had to stay home to take care of my younger siblings.” Born into a poor family, Phy Sophal had been denied the opportunity to attend school as a child, missing out on lifetime of activities as a result. Now, at the age of 65, Sophal is making up for lost time. The grandmother is one of CCF’s adult learners who are being given a chance to step into the classroom - the first time for some - learning to read and write Khmer in evening classes given in the heart of the community where they live in Steung Meanchey. 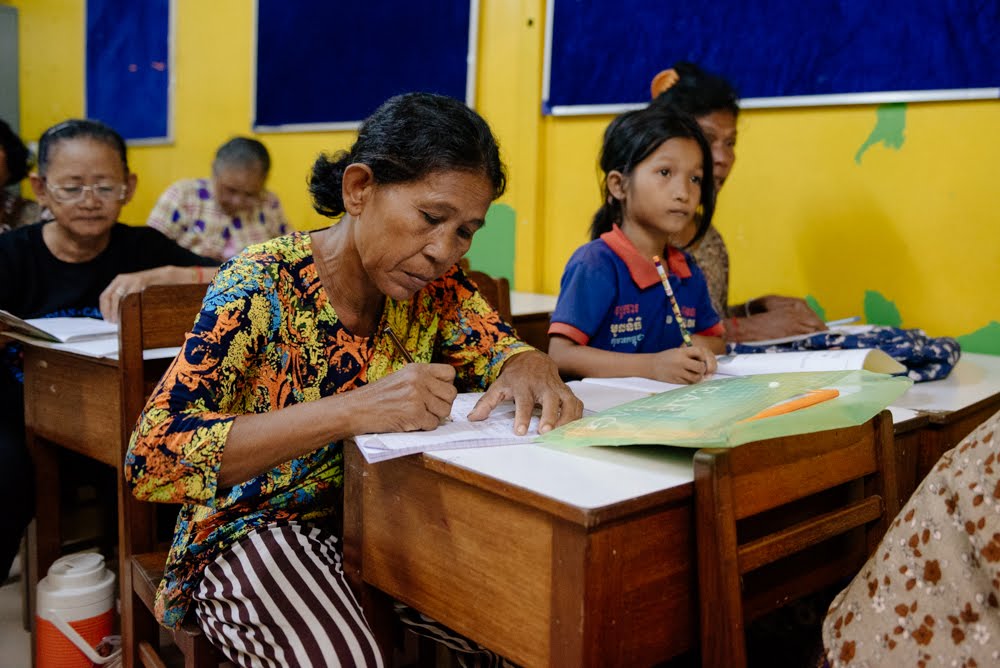 Officially launched in 2017 as a three-month pilot project, CCF’s Adult Literacy Program has become a full blown adult education program, taught by volunteer Leadership Students, who get as much out of the experience as the mature students. 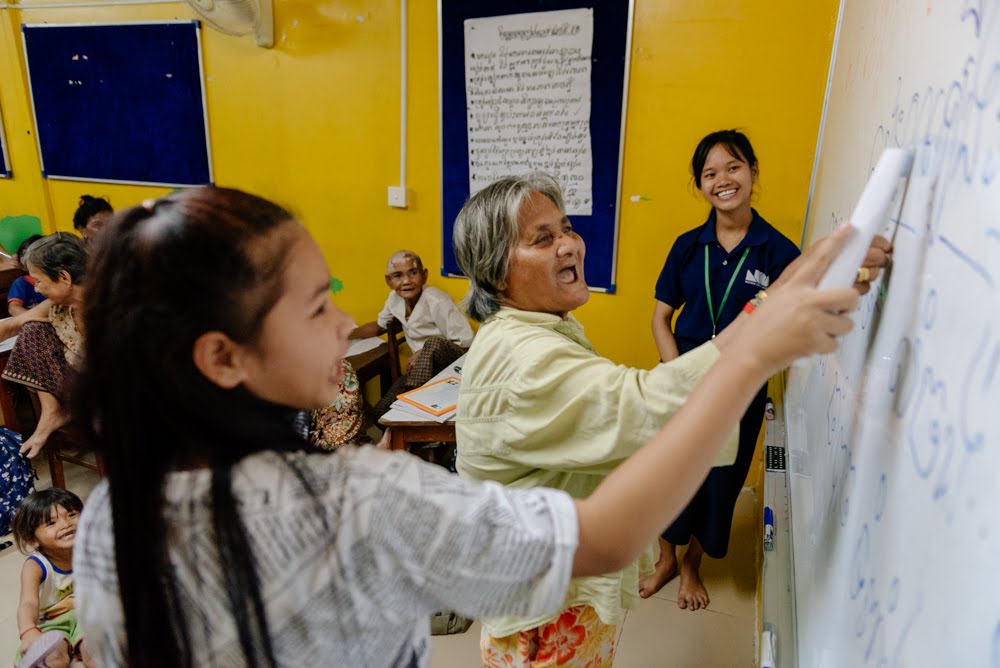 Last year, 50 adult learners graduated from their class, with a diverse age range from 60-something grannies and grandpas to parents of CCF children. 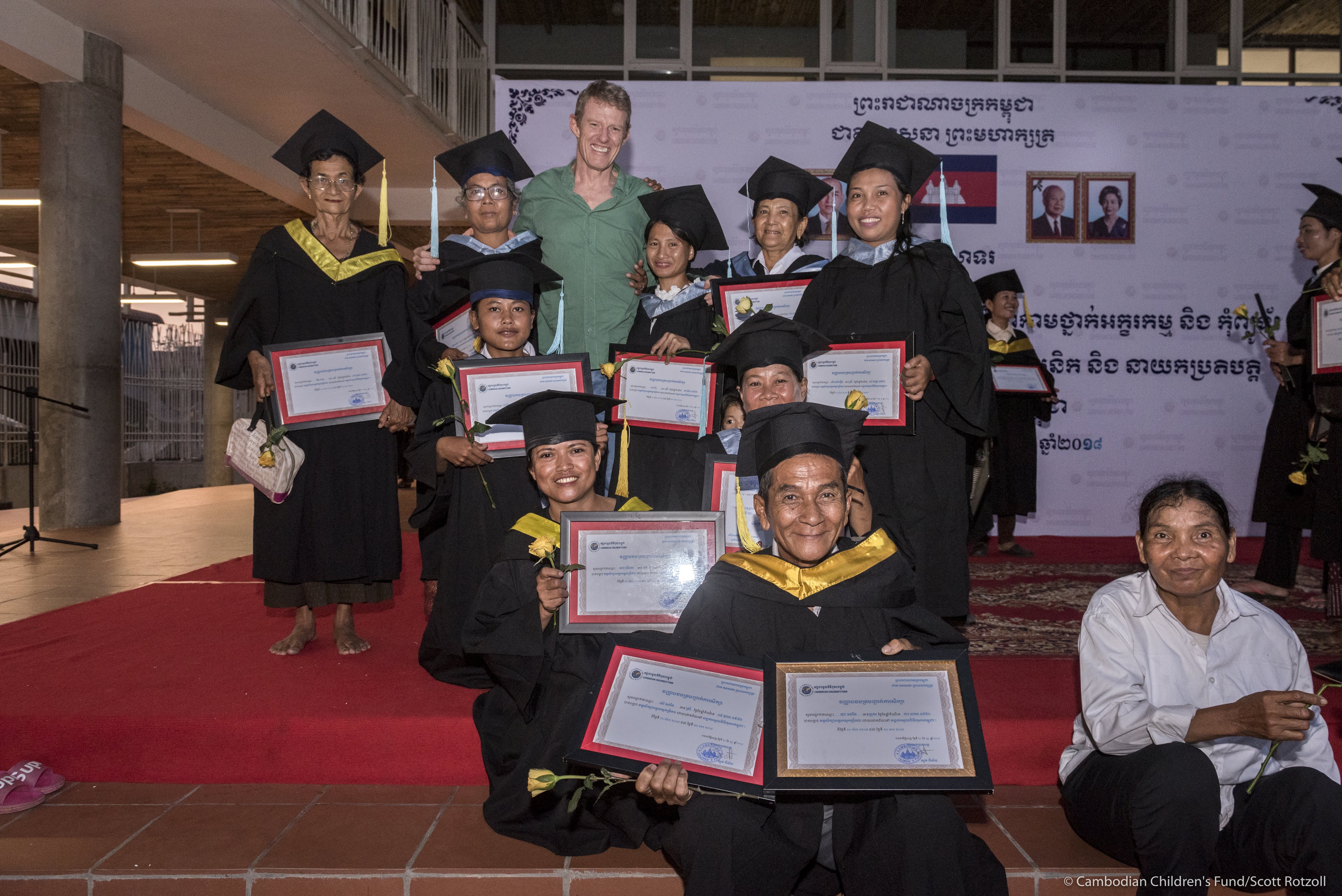 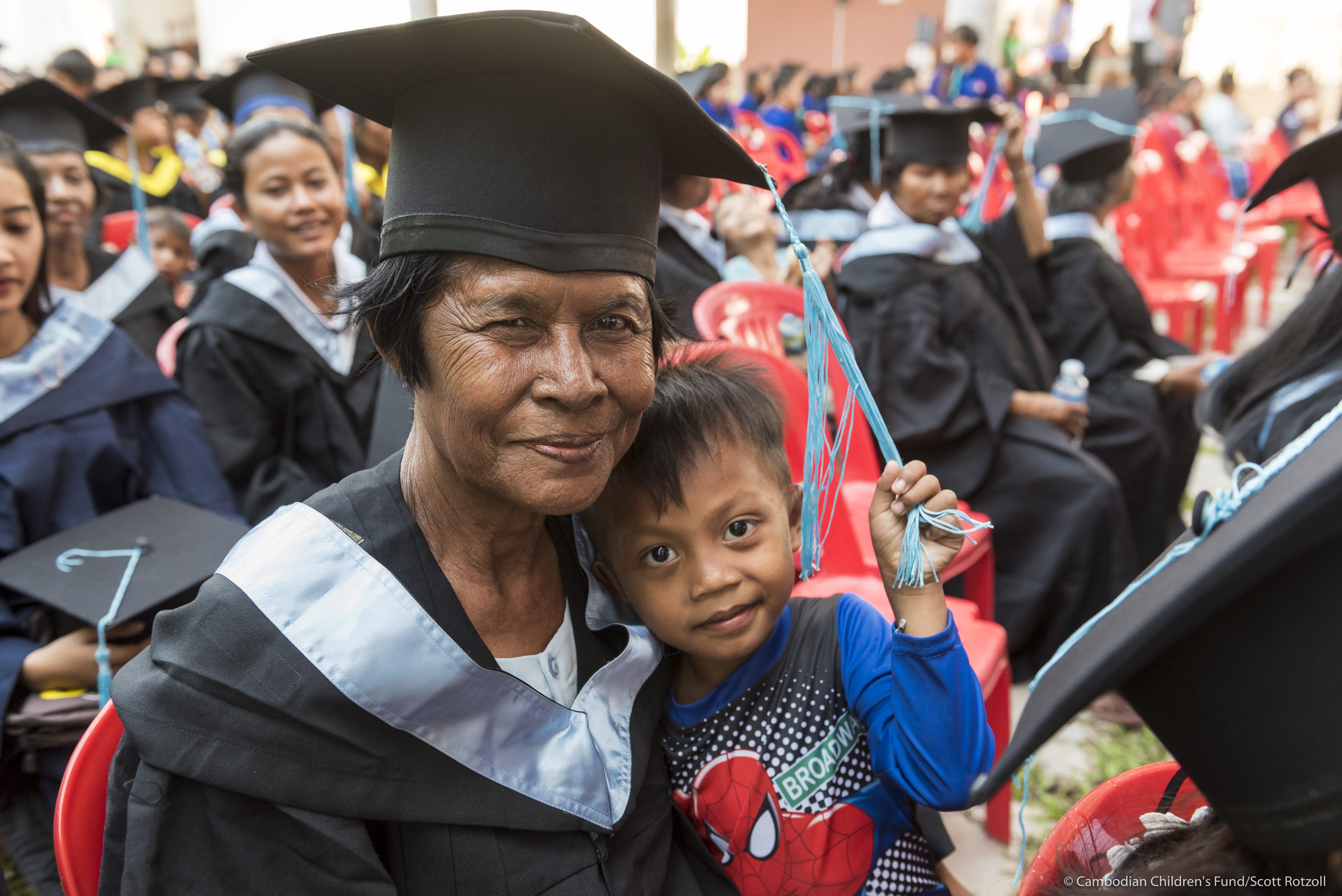 This year, 88 granny and mums and dads proudly received their certificates at a graduation ceremony at the Neeson Cripps Academy last night, the first CCF graduates of 2020. 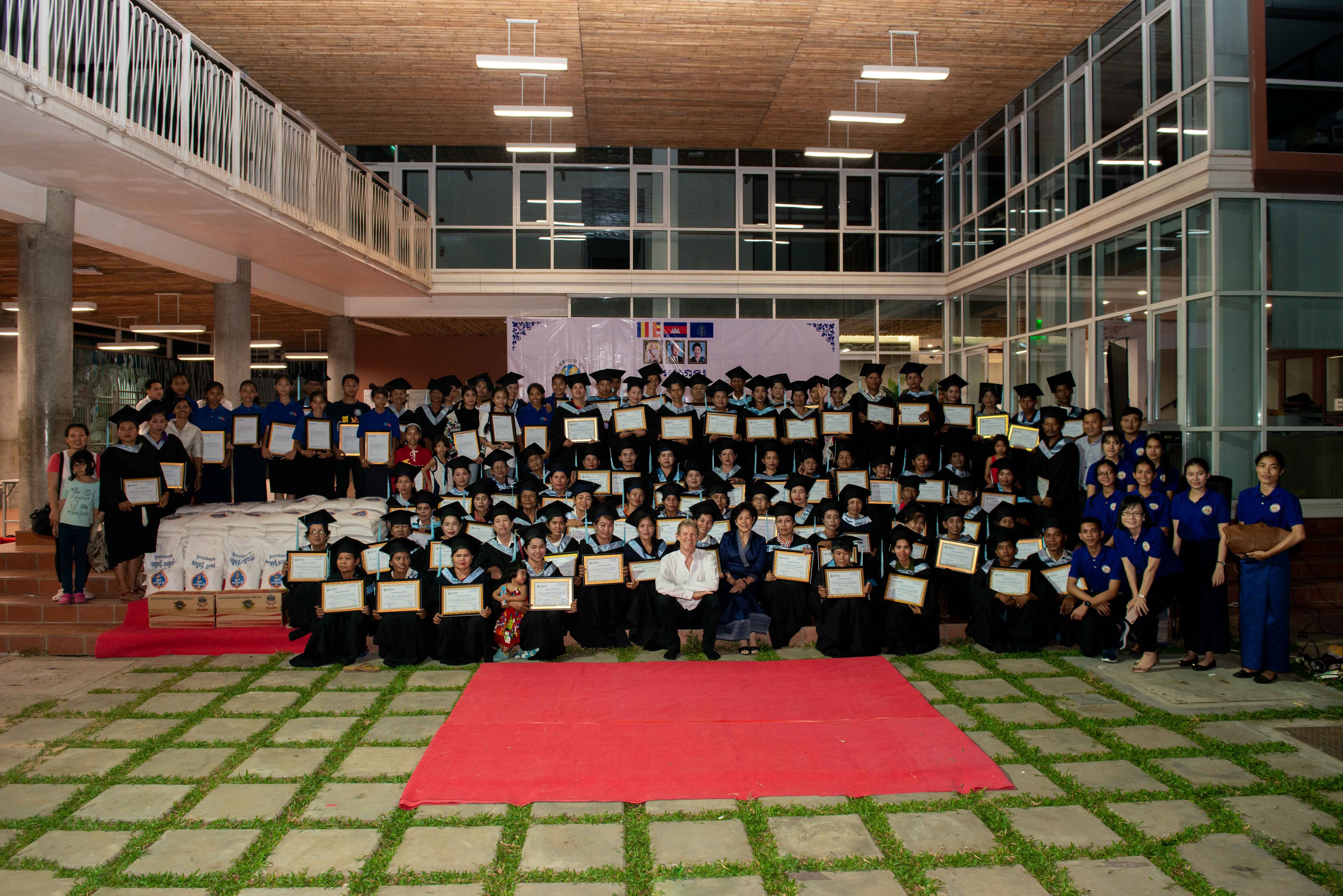 CCF was honoured to welcome Her Royal Highness Princess Samdech Reach Botrei Preah Anoch Norodom Arunrasmy and His Holiness Samdech Bour Kry, the leader of Buddhism in Cambodia, to the event. 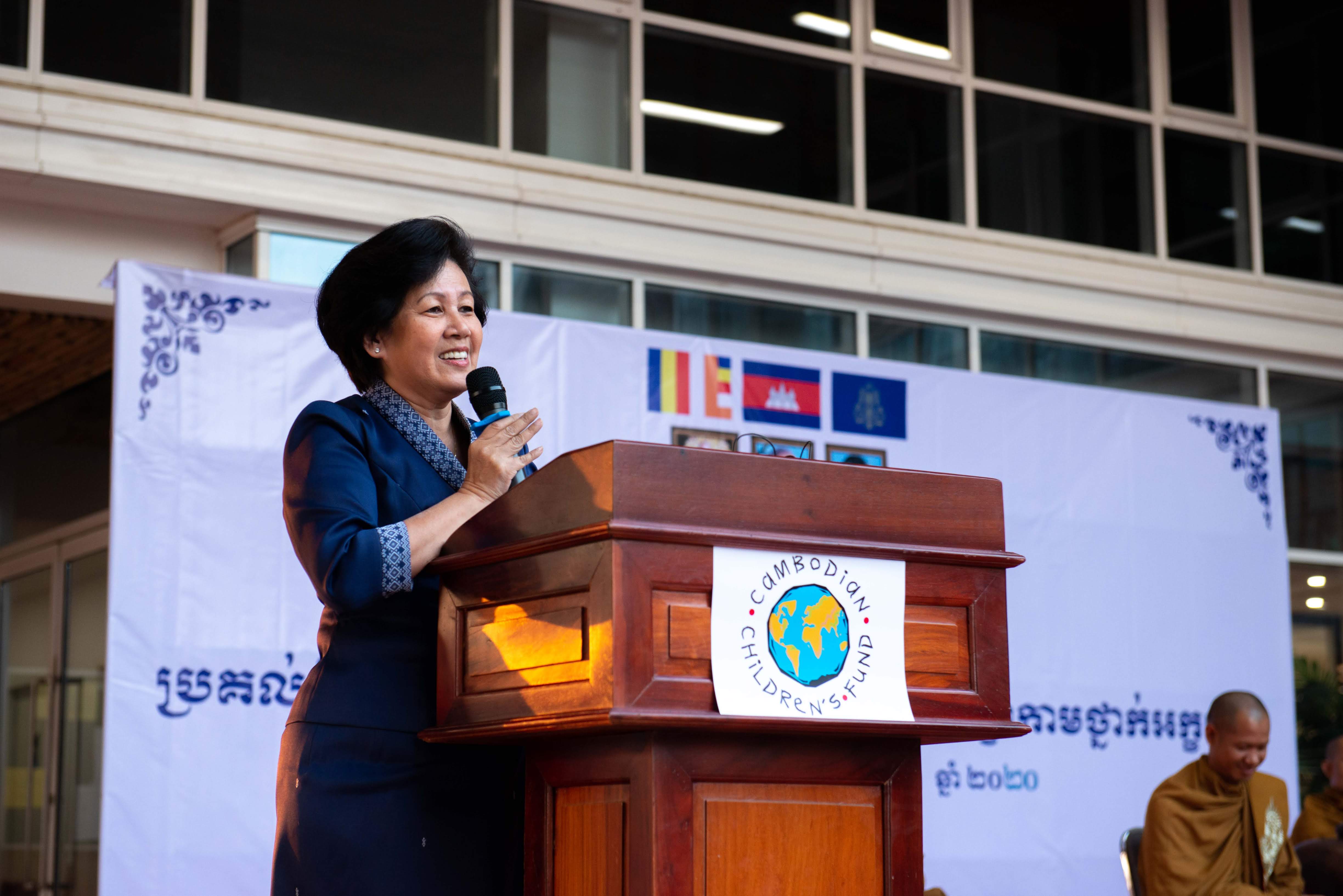 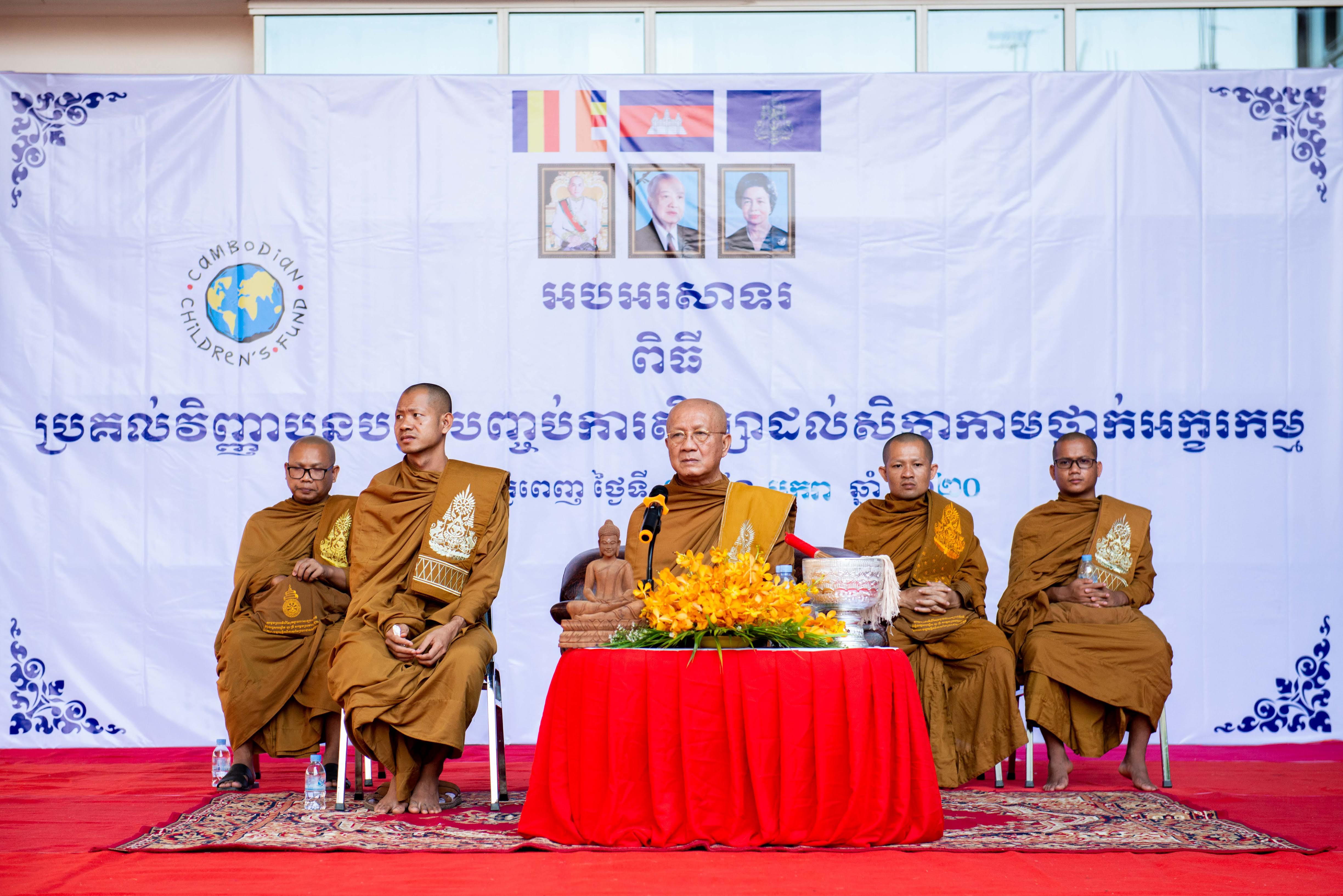 Being able to read and write at this stage in their lives has opened up a whole new world. For mums and dads among them, it offers the chance to get better jobs and create a better life for their families. And the grannies and grandpas, once forgotten members within their own communities, have been given a new lease of life. 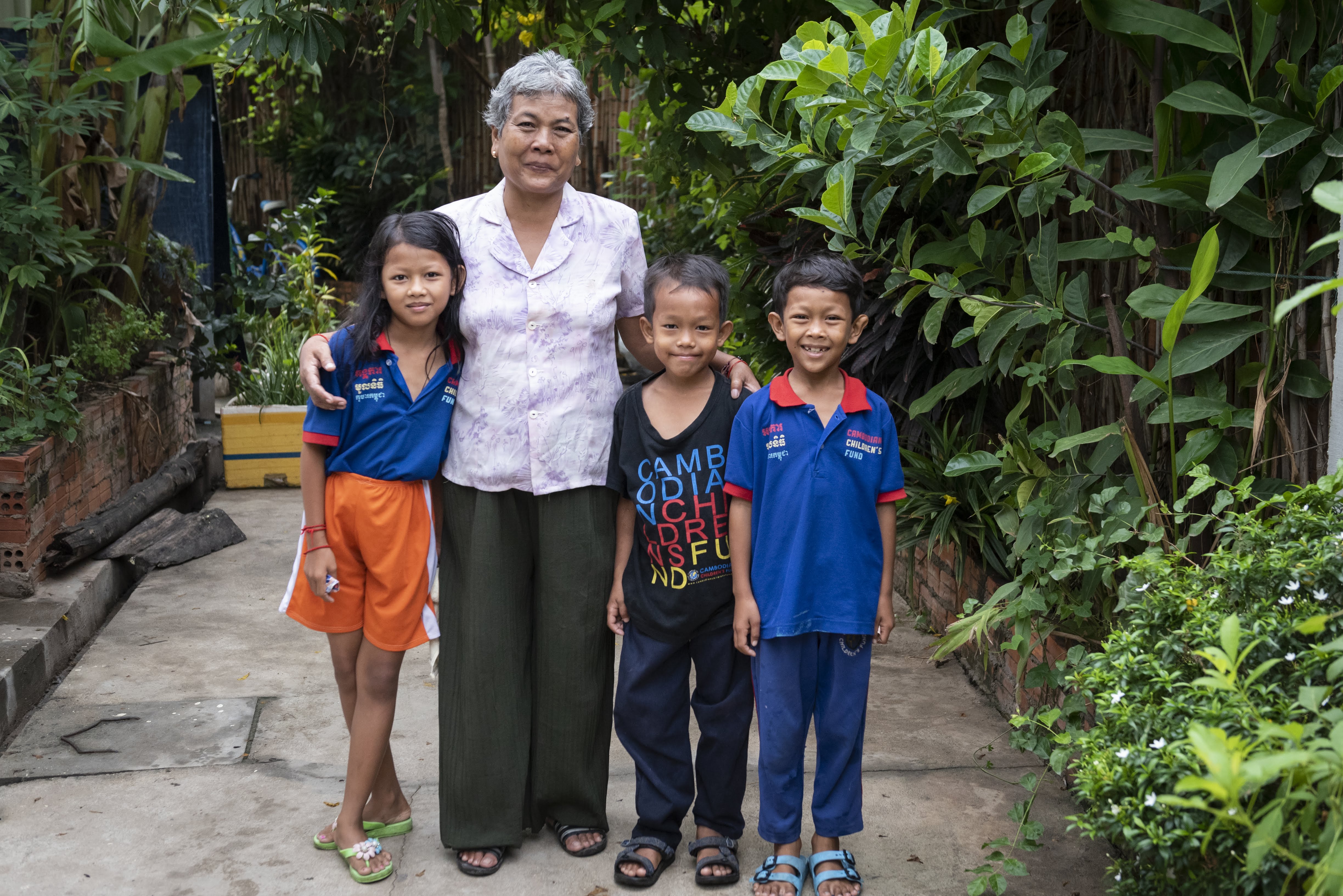 “Prior to taking this Khmer literacy class,, I could not read or write the Khmer alphabets,” says Granny Sophal. “Now, I am able to read them and write some names.” Her dedication to studying and new-found confidence has also paid off with a job. Granny Sophal can now be found in the morning selling breakfast at Cafe Scott, CCF’s community cafe named after CCF Founder and Executive Director Scott Neeson, located in the CCF community. Educating the older members of the community also helps the children and grandchildren too, who benefit from more engaged grandparents and parents. Granny Sophal now enjoys reading with her more than 10 grandchildren, encouraging them to attend school and study hard, having seen as a child how her own parents and grandparents were denied education in their youth and witnessed firsthand the poverty and lack of opportunities that came about as a result. “It is very important to have literacy classes for our community people, especially for those who had no chance to go to school,” said CCF’s Community Outreach Manager, Leanghoin Hoy, pictured below with one of the granny graduates 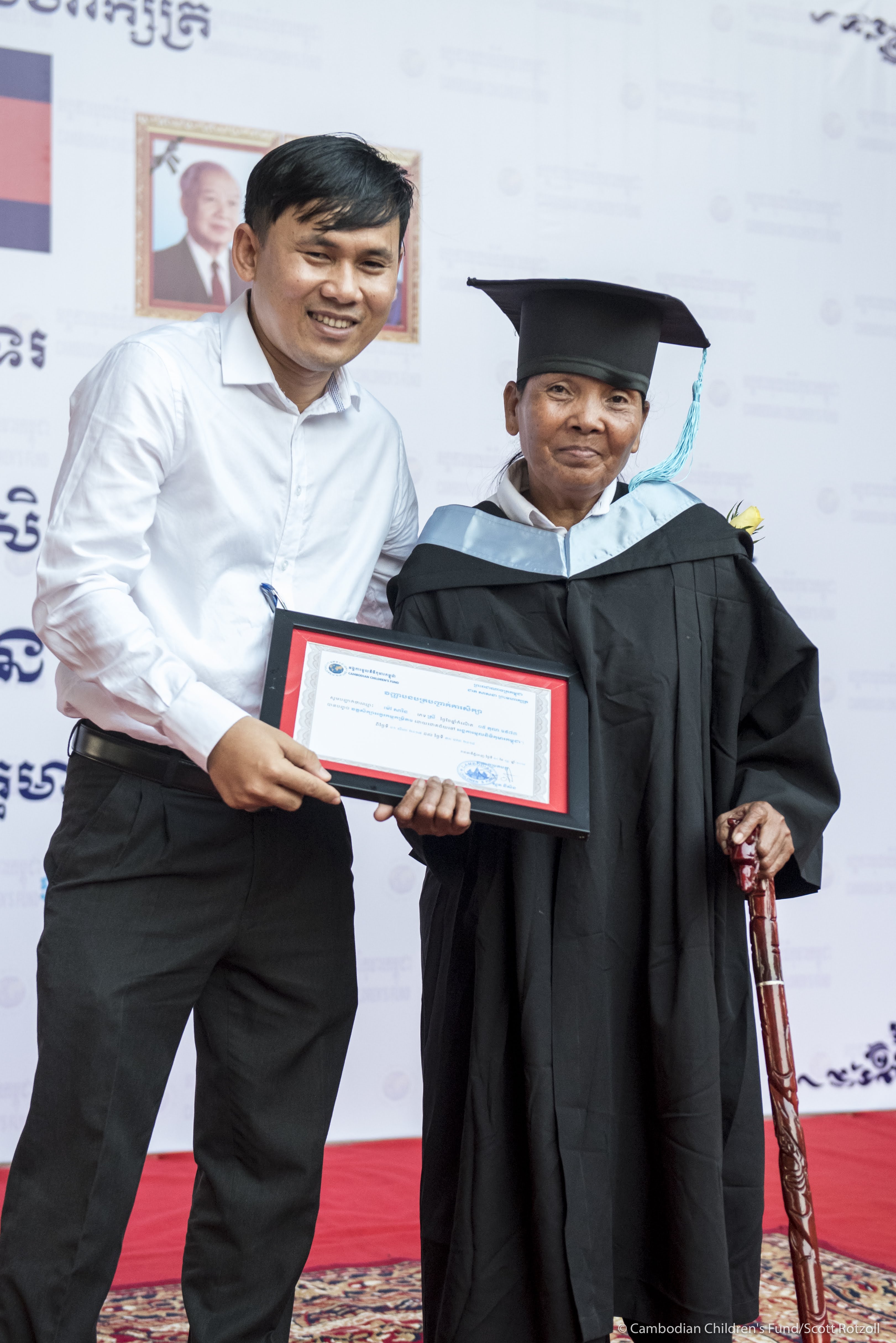 The benefits include being able to communicate effectively in their daily lives, better interaction between senior and young generations and providing role models for the younger members of the community, he said. Here, we introduce some of our remarkable adult learners: Granny Sophal 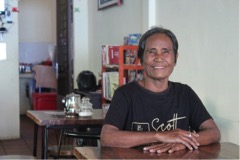 Mother-of-five and grandmother Phy Sophal, 65, lives in a CCF World Housing community and is supported by CCF in the Granny Program. Brought up in a province in a poor family, Granny Sophal never had the chance to go to school and did not step foot in a classroom until she was 64. Inspired by others, she asked to join CCF’s Adult Literacy classes to learn to read and write Khmer. “It is not easy at this age to go to school because I have lots of things to do like cooking for my grandchildren,” says Granny Sophal. “However, I have to allocate time to go to the class because I wish to be able to read and write.’ With determination, she has made great progress and can now read, and write the breakfast order in her new job working at CCF’s community cafe, Cafe Scott. She is also looking forward to helping her grandchildren (she has more than 10) with their own studies. Vol Oun 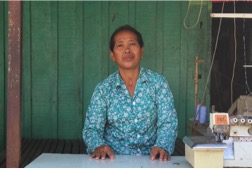 “When I was a child, I had been in school for only two days but, as my eyes were sick, I quit school from that time on,” says Vol Oun, 53. With no formal education, Oun’s opportunities were limited. As a child, she would help her mother sell Khmer cakes to bring much needed income into the family. Navigating a world without being able to write or even write the name of a building or shop was hard over the years but Oun had no choice. Later, she married and had four children with husband Hout Bunthorn. The family now live in a rented room in Steung Meanchey and are supported by CCF. When Oun had the chance to restart her education through CCF, she jumped at it. “I feel regret for missing school in my childhood,” says Oun, who works for Phnom Penh’s private refuse firm, Centri. “I decided to join the literacy class because CCF set up the class in the community near my house and I wanted to know how to at least read the Khmer alphabet.” Oun is a model student and has not missed one of her Adult Literacy classes, juggling the lessons with looking after her children. Her husband, Bunthorn, has also become one of CCF’s adult learners. Now, she is able to read the alphabet, count numbers and write some words. “I feel happy that I have the chance to study and I’m improving now,” says Oun. Hout Bunthorn 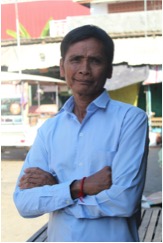 As one of eight children in a poverty-stricken family, Hout Bunthorn was only able to attend school briefly. He attended first grade but had to drop out because his parents couldn’t afford the fees and needed him to get a job to help the family finances. By the age of 10, he was working with his uncle selling items on the streets of Phnom Penh. Forty five years later, Bunthorn, now 55, finally went back to school to pick up where he left off all those years ago. Thanks to CCF’s Adult Literacy Program, he now has a basic reading level and is able to spell some words. “CCF has provided this class to community people and I joined because I would love to learn more,” says Bunthorn, who is taking lessons with his wife, who also missed out on a formal education. His new-found literacy skills have come in handy in his job as a moto taxi driver, reading street and shop names. While some of his friends told him he was too old to be in school, Bunthorn is undeterred and has signed up for the next term. He hopes to be an inspiration for other people of his age in the community to join the Adult Literacy Program. Kate Ginn/CCF