UK Taxpayer? You can help CCF even more

CCF is now has its own unique support organization in the form of CCF-UK, a fully registered UK charity; registration number 1135214. CCF-UK has a single and utterly essential aim – raising the funds to support CCF's work in Cambodia, thereby ensuring the continuation of our life-changing programmes. It is those funds which help ensure that CCF stays alive and well, able to continue and develop its work, from supporting the hundreds of children that many of you sponsor to providing clean water for their communities and good, free medical care for those who need it. One of CCF-UK's first acts has been the setting up of an account with Justgiving, a company which provides online fundraising tools in order, as it says, to 'allow ordinary people to raise extra ordinary amounts of money'. A leading business and management magazine for UK non-profit professionals, Charity Times, has claimed the company had "transformed the face of donating in the UK". Justgiving provides its services to some 7,000 UK charities. CCF is now one of them. Why? When it comes to charitable giving the UK government is a generous one. Through its Gift Aid scheme (which you can read about here:http://www.hmrc.gov.uk/individuals/giving/gift-aid.htm) it allows charities to reclaim the amount of tax you have paid on the money you donate. With basic rate tax at 20 per cent, this means that if you give £10 using Gift Aid, it's worth £12.00 to CCF. Even better, for donations made between 6 April 2008 and 5 April 2011 the charity will also get a separate government supplement of 3p on every pound given. Not only does Justgiving pass on your donations, it reclaims the Gift Aid supplement from HMRC and passes that on too – less a fee, which comes out of the Gift Aid element, not from your original donation. For CCF this not only saves us the costs of administering the donations and the further work of making Gift Aid applications but it means that your money suddenly and painlessly gets some real extra clout and reach. Do remember too that CCF's own financial roadworthiness has been tested and tried by Charity Navigator (www.charitynavigator.com ), the largest and most-utilized independent evaluator of charities in the US, which gave us its top 4-Star rating. One of the commentators on the site noted; "As a journalist I have covered NGOs all over the world. CCF is by far the most efficient well-run organization I have ever come across. I have visited CCF at least five times over a period of five years, watched it grow dramatically, and been amazed at the quality and multitude of services it provides, healthcare, education, and more. And I have seen the positive difference it has made in the lives of so many people. My hope is that other NGOs learn from CCF's model." Your money can help CCF continue to make that positive difference. So, if you are a UK taxpayer, please make use of the Justgiving facility which you'll find at;http://www.justgiving.com/cambodianchildrensfund 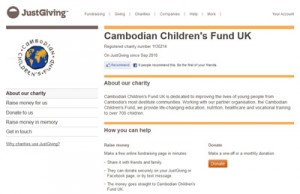