Click here to view the full article. Srey Mom has gone from trash scavenger to local heroine. She spent most of her teenage years digging through trash searching for recyclables in the now-closed Steung Meanchey garbage dump, but in 2009 she entered a leadership program started by the Cambodian Children’s Fund (CCF) that helped lift her out of poverty. 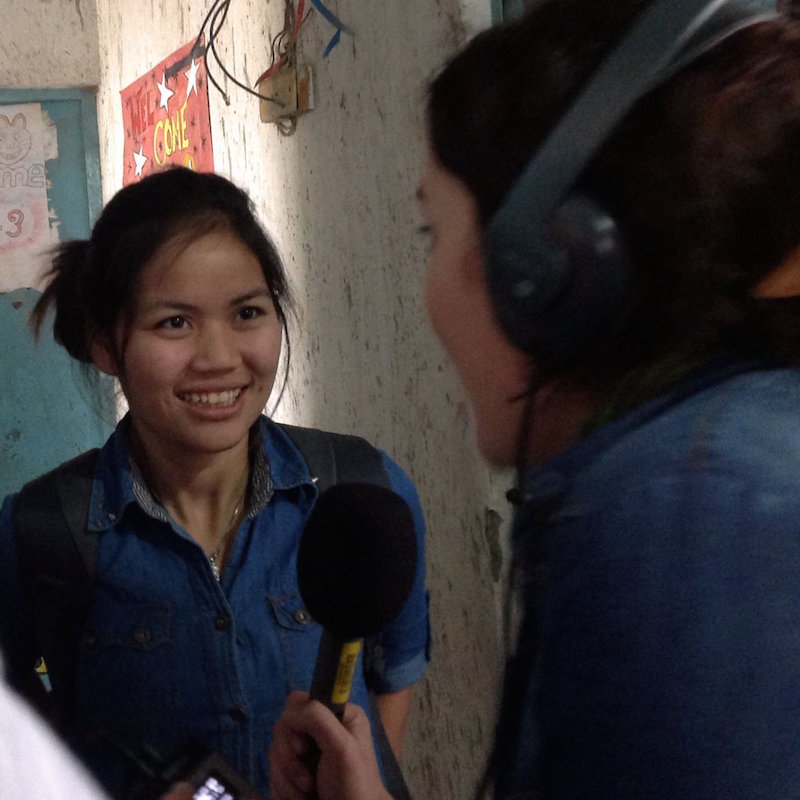 With lessons in public speaking, English, and computer literacy, CCF’s training helped Ms. Mom overcome her humble beginnings. She now teaches leadership classes to students at a CCF school. Buoyant and charismatic, she is a favorite of the many children who study there. “When I started out studying, I only knew the letters A, B, C, and D,” she said. “I was collecting garbage since fourth grade and earning $1 a day. But now I have the opportunity to learn and help a lot of people.” And she is a star beyond the Steung Meanchey neighborhood: last year Ms. Mom participated in the BBC’s “100 Women” conference, which hosted debates over women’s issues. CCF’s school program has grown dramatically since 2009, and now provides lessons for more than 2,000 children. But schooling is only part CCF’s mission to transform the lives of Phnom Penh’s poorest families. 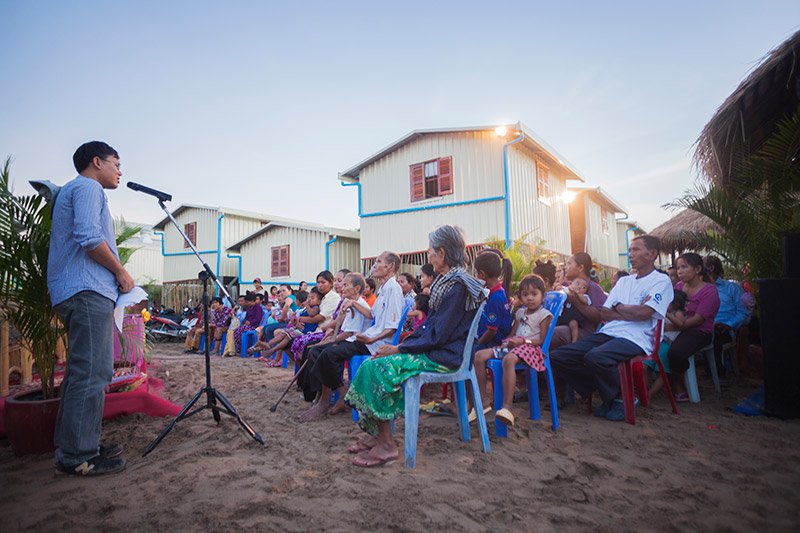 A picture from one of CCF's World Housing gifting ceremonies

Over the last year and a half, CCF has built more than 300 homes as part of its World Housing program, providing housing to hundreds of families at just $15 a month. These homes are simple, sturdy, buildings on stilts that are built in groups of up to 56 homes. If families prove their commitment to education by keeping their children enrolled in CCF’s schools, they can qualify for one of the houses. CCF focuses on making the homes comfortable, while also building a strong sense of community within each development. “We don’t want the community to feel like a ghetto,” founder Scott Neeson said. And it doesn’t: children scamper between the houses and play on the slides in the playgrounds, while their parents cook dinner and chat in the open space under the houses. Near the houses in Steung Meanchey neighborhood are several CCF schools, where parents can drop off their children before going into the city for work or to scavenge for recyclable metal and plastic. 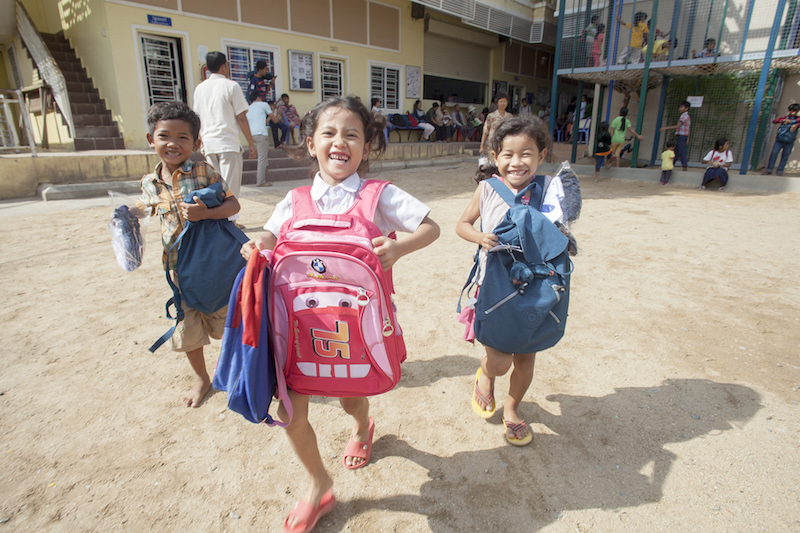 The schools don’t just provide lessons – they protect the children from the dangers that come with their parents’ jobs. “We lost a couple of children to road accidents because the parents would go out into the city pulling the trash carts behind them, and they’re occasionally hit by cars,” Mr. Neeson said. To ensure the children go to school instead of being brought to work with their parents, parents have to agree to a simple contract in order to get a home in a World Housing community. Children must go to school regularly, and there are rewards – such as bags of rice – for perfect attendance. CCF employees will come by to check at the family’s house if a child misses a single day of school. The only other requirements are that parents cannot be violent or abusive, cannot use drugs, and cannot force their children into paid labor. As a result of these requirements, rather than spending their days digging through trash, the children spend their time learning English, math, or taking drama classes. They also receive hot meals. CCF provides food every night for about 600 children. Mr. Neeson said these requirements encourage parents to send their children to school, rather than relying on them for income or to do work around the house like they traditionally have. “The parents couldn’t afford to send them to school in the past,” Mr. Neeson said. “They needed them to do work.” 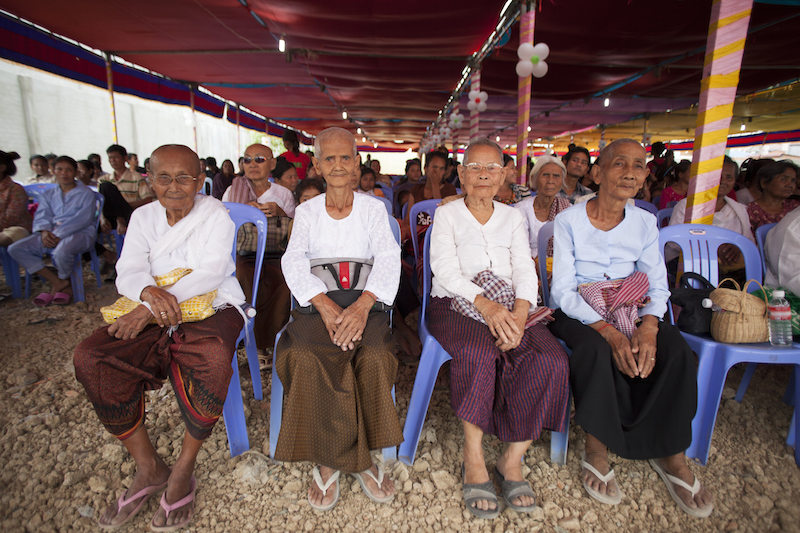 Grannies are vessels of wisdom in the CCF community

Along with the playgrounds and nearby schools, the communities come with a unique feature that Mr. Neeson said can be equally important to children’s development – grannies. “There are just over 80 grandmothers in these homes,” said Scott Neeson. Every group of 15 houses has a local “granny” who helps teach the younger generation about Cambodian heritage and moral values. “I have this fear that when the grandmothers go, there won’t be any moral education. They help teach social structure and wisdom,” Mr. Neeson said. “These are people who used to be the bottom of the social structure, and they had to survive by begging or scavenging for food, but now they’re the top of the social structure because people go to them for advice.” The 300th World Housing home was built this summer, but CCF isn’t resting on its laurels. New World Housing communities are being built in Kandal and Prey Veng provinces. And Mr. Neeson continues to go into the communities every night to talk with the families and find inspiration for new improvements to the World Housing model. “It gives you a real insight into what the real problems are, and into the solutions,” he said. “It’s one of those things that if you weren’t down there every night speaking to the mothers, you couldn’t understand.”