Keeping vulnerable children and families safe during the COVID-19 pandemic saw CCF put in place unprecedented ongoing emergency measures. And its CCF young leaders who have been giving vital help out in the community. Senior Sponsorship Program Manager, Rubina Jacob and Chanvisal Koun from the Sponsorship Team in Phnom Penh, met up with three of them. 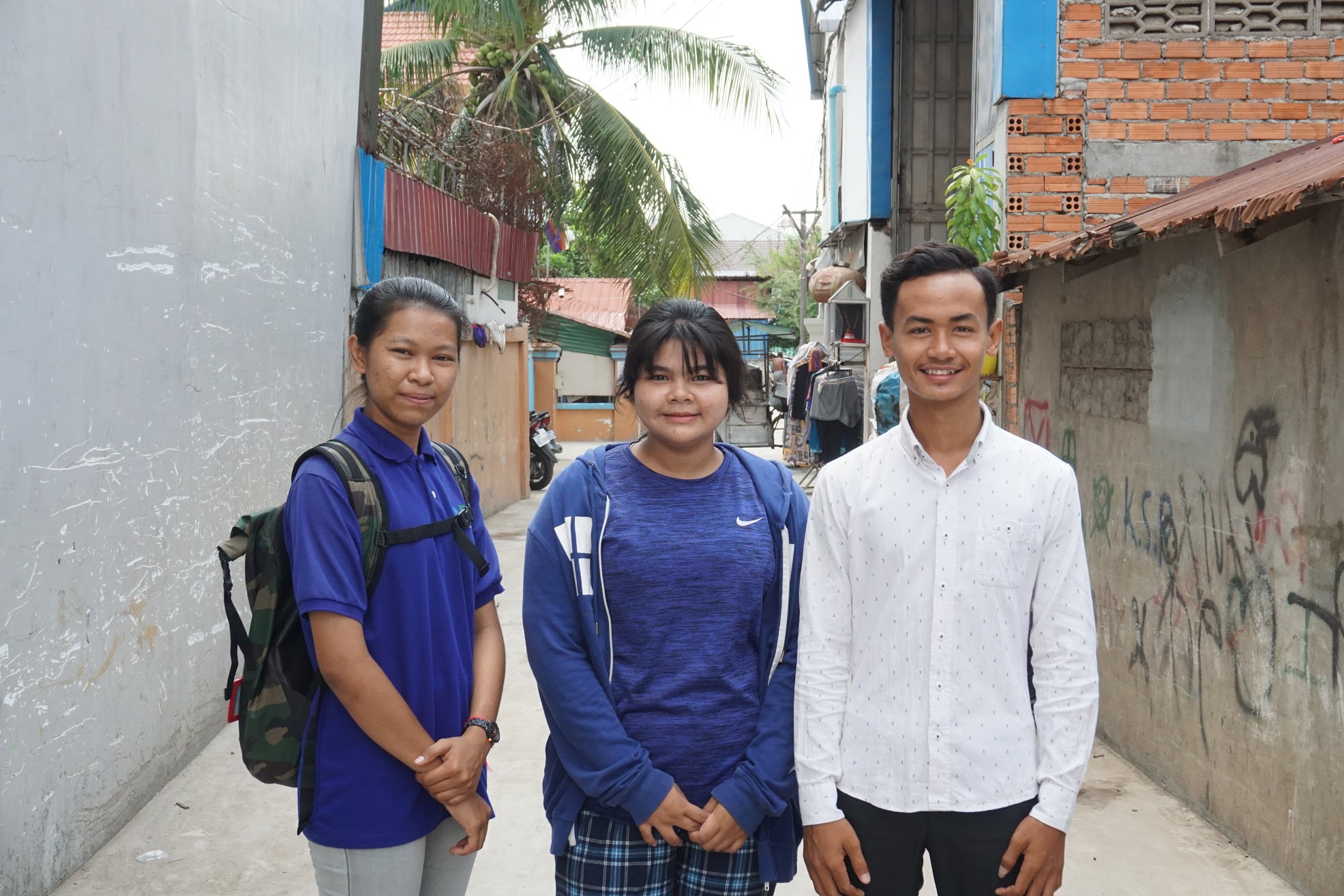 Even as young people worldwide face unprecedented difficulties and uncharted paths with the COVID-19 virus, there are many who are rising up to make a difference. Meet Sat Vina, Suy Savdy and Roeun Lina, just three of the many CCF students who are part of the Young Leadership Program and have stepped up to volunteer their free time to help CCF’s Community Relations team working in communities to keep children and families safe. A small army of young leaders have taken on responsibility for various activities on the ground. From helping with meal preparation and distribution, hygiene awareness, distribution of soaps and hand sanitisers, or giving the younger kids a hand to get to grips with study handouts, they have played a key part in the crisis response. Sat Vina, 17, lives in one of CCF’s World Housing group homes. His parents were farmers and despite having little, his mother always encouraged him to study. He joined CCF in 2012, and joined the Youth Leadership Program in the same year. “I used to be very shy, and hardly had any friends. I initially joined the program to boost my confidence and make friends,” says Vina. “It was only once I joined the program that I did find that, yes, I wanted to change myself but also had this growing desire to serve and help the community.” Over the years, Vina has volunteered in different CCF leadership programs such as TOMs shoes and our Evening Food Program.

“I specifically like volunteering with the Granny Program as I learn a lot from the grannies about Khmer culture and the past history of Cambodia,” Savdy says.

Fellow young leader Suy Savdy, 20, who started school late as her parents were unable to afford to send her to school, also used to suffer from shyness. “I was a very shy girl, not brave at all. I joined my class late and because of that I sat by myself. I was afraid and shy and would not speak to anyone and no one would speak to me,” says Savdy. “But things really changed for me the year I joined CCF’s Leadership Program in 2014. Besides helping build my confidence, it also gave me a very heavy heart to give back to CCF and the poor. Savdy, a student at CCF’s Neeson Cripps Academy, volunteers with the Food Program and the Granny Program, where youth leaders are given responsibility for visiting elders in the community, helping prepare meals and offering friendship. 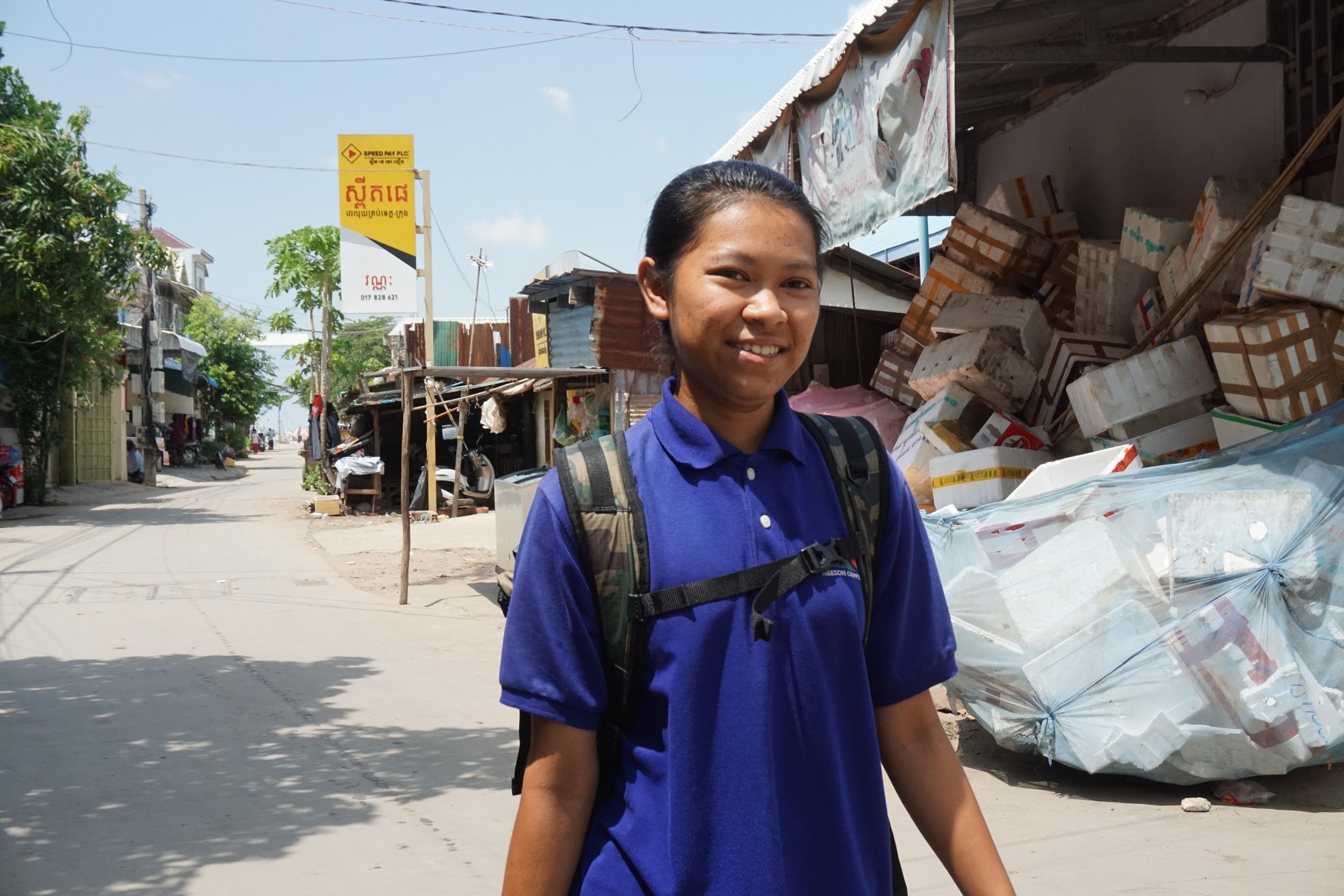 Roeun Lina, on the other hand, had all the confidence in the world. The CCF student did not actually sign up for the Leadership Program - it was a teacher who suggested she join. “My teacher noticed I was very talkative in class and saw the way I interacted with everybody, and would often help my friends during their class, and she signed me up for the Leadership Program,” says a giggling Lina, 17, who, like Sat Vina, lives in a World Housing group home. 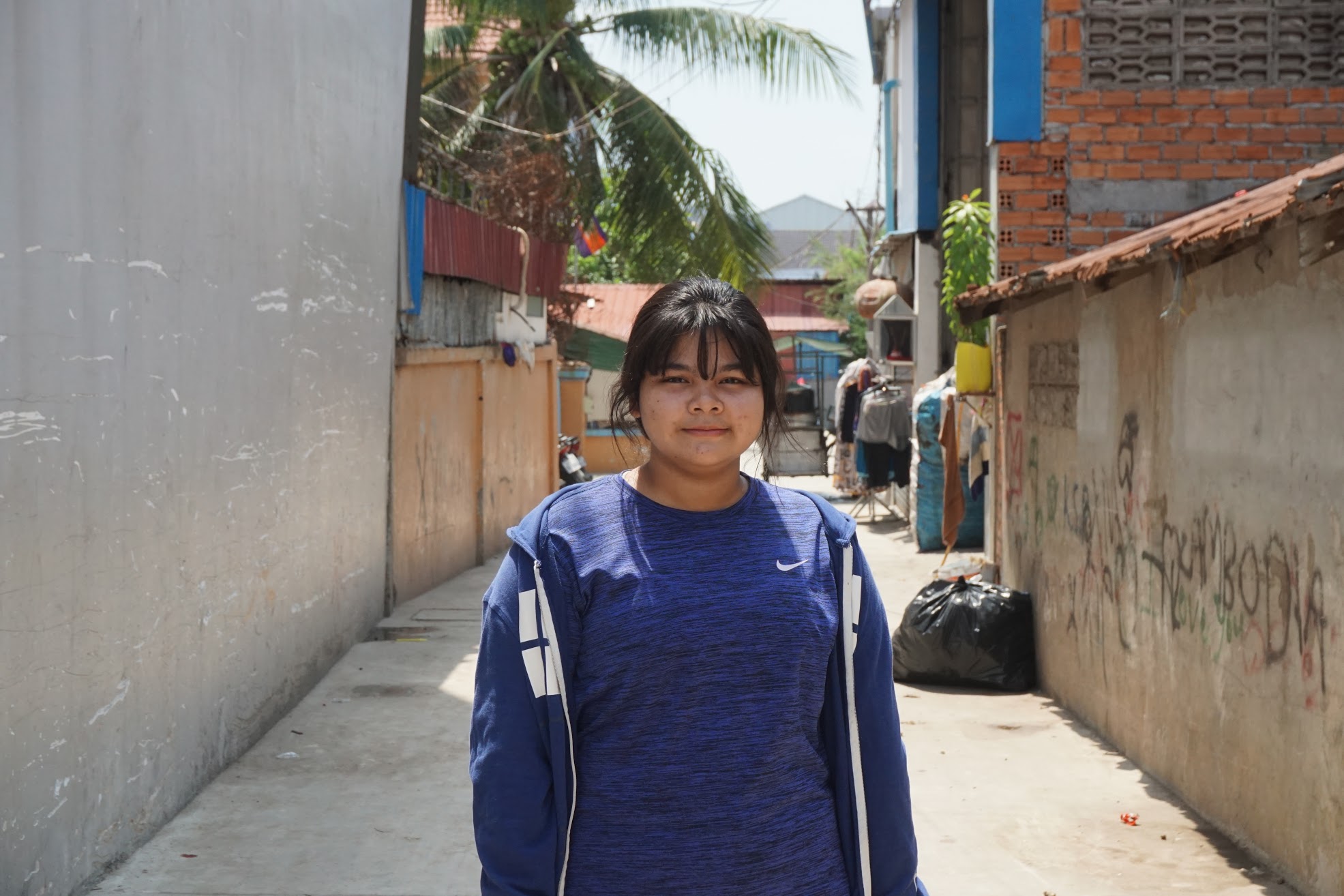 “I thought, well, instead of being bored, I will join my friends and do some fun activities. I found I actually liked being with kids and grannies and enjoyed helping in the community.” 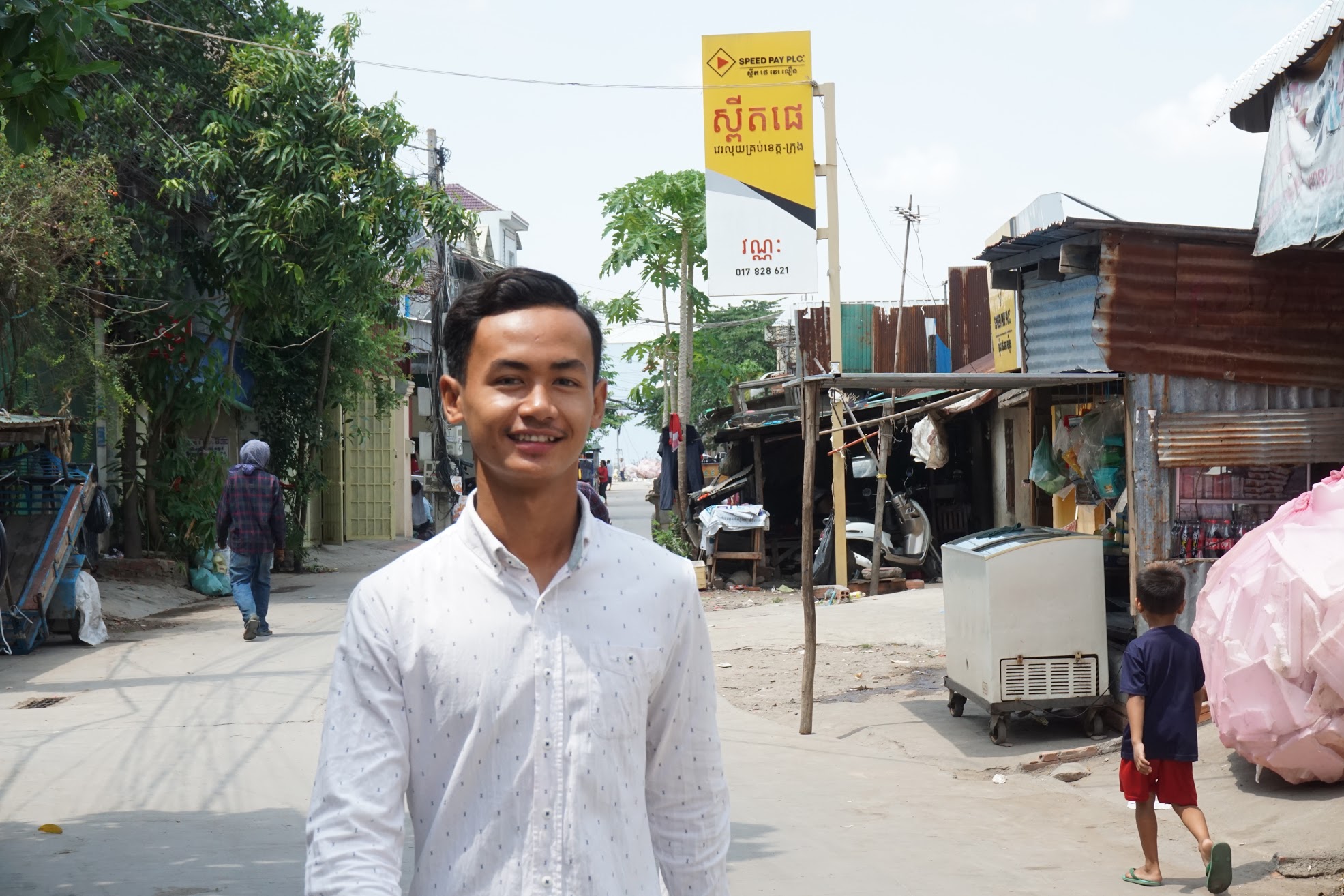 When schools closed in Cambodia due to the coronavirus pandemic, CCF students were given study handouts to continue their education at home. Savdy was asked if she would help the younger kids with their studies, which she readily agreed, one of her young charges being Teng Bros Toch, a cheeky 10-year old who had a bad start in life and now lives in a CCF foster care family. 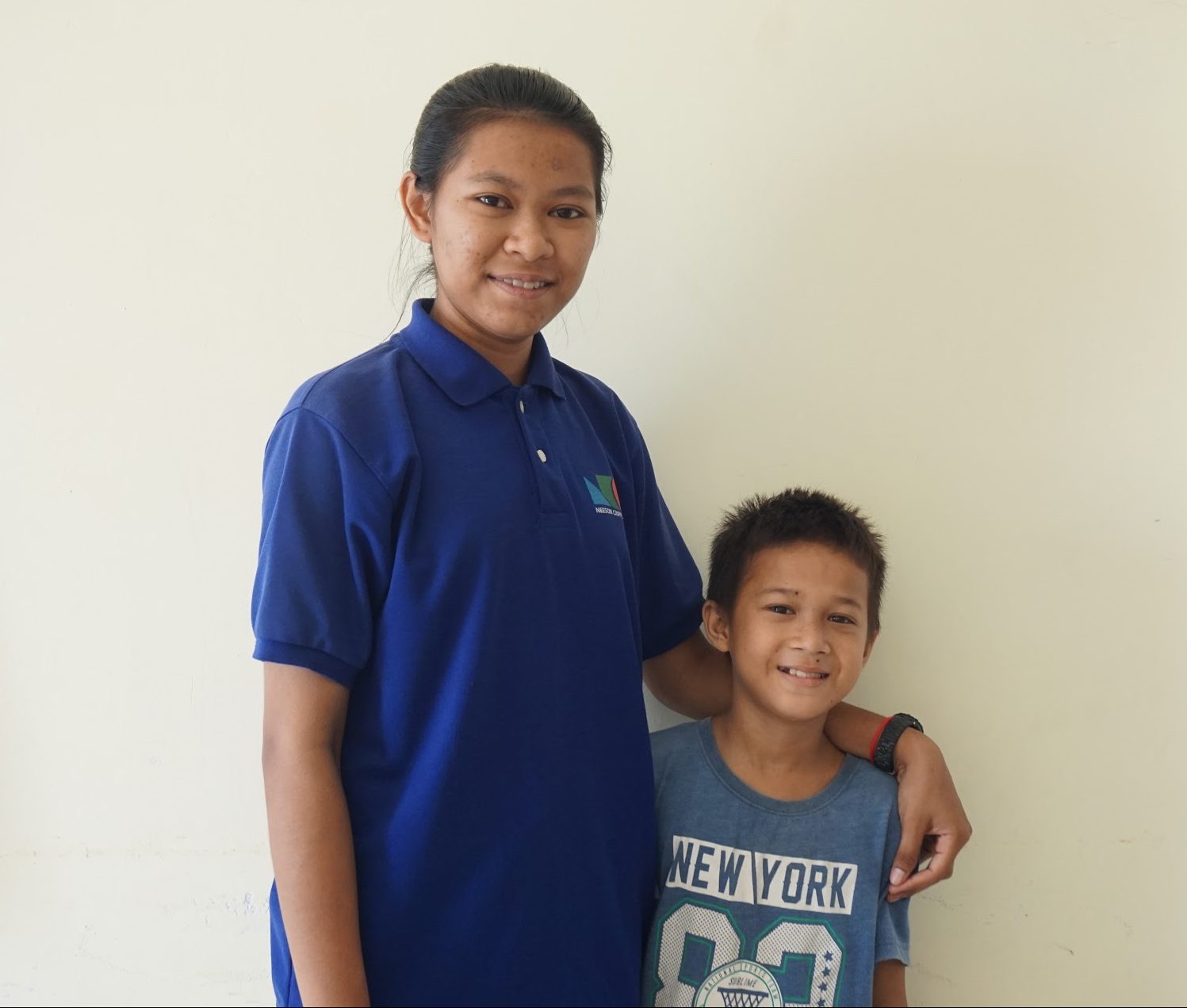 “He studies very hard and is such a good student,” says Savdy. “ Some evenings when we are free, the Community Relations team let us use their laptop to study.” Savdy also tutors a small bunch of children in the World Housing community where she lives with her mother. “I will say I am not shy anymore but brave”.

"My mother was very surprised that I was not shy or afraid to speak.”

Sat Vina visited his mum in the province during the Khmer New Year and says: “I held a COVID-19 knowledge session with others in the village so that they too can learn about being safe and washing their hands." All three young leaders have sponsors and while the others were shy to speak about them, Savdy wasn’t. “I finally got to meet them last year when I went to Australia for the two-week Leadership Program at Trinity College [at the University of Melbourne],” she says. “I was very happy. They have sponsored me for seven years. They always encourage me to do my best and take great pride in everything I do, even the small things like me playing basketball. They tell me to follow my dreams and that no dream is too small.” Where do these young future leaders see themselves in a few years? Savdy wants to either be a nurse or doctor, Sat Vina is interested in robotics and hopes to own his own business someday and Lina wants to be a teacher, while Bros Toch is unsure but thinks maybe a policeman. As Sat Vina puts it. “I found that I used to be that person in need and now I am on the other side where I once was. I grew up not having anything and we were very poor, I can understand the community and that is why I need to help”. 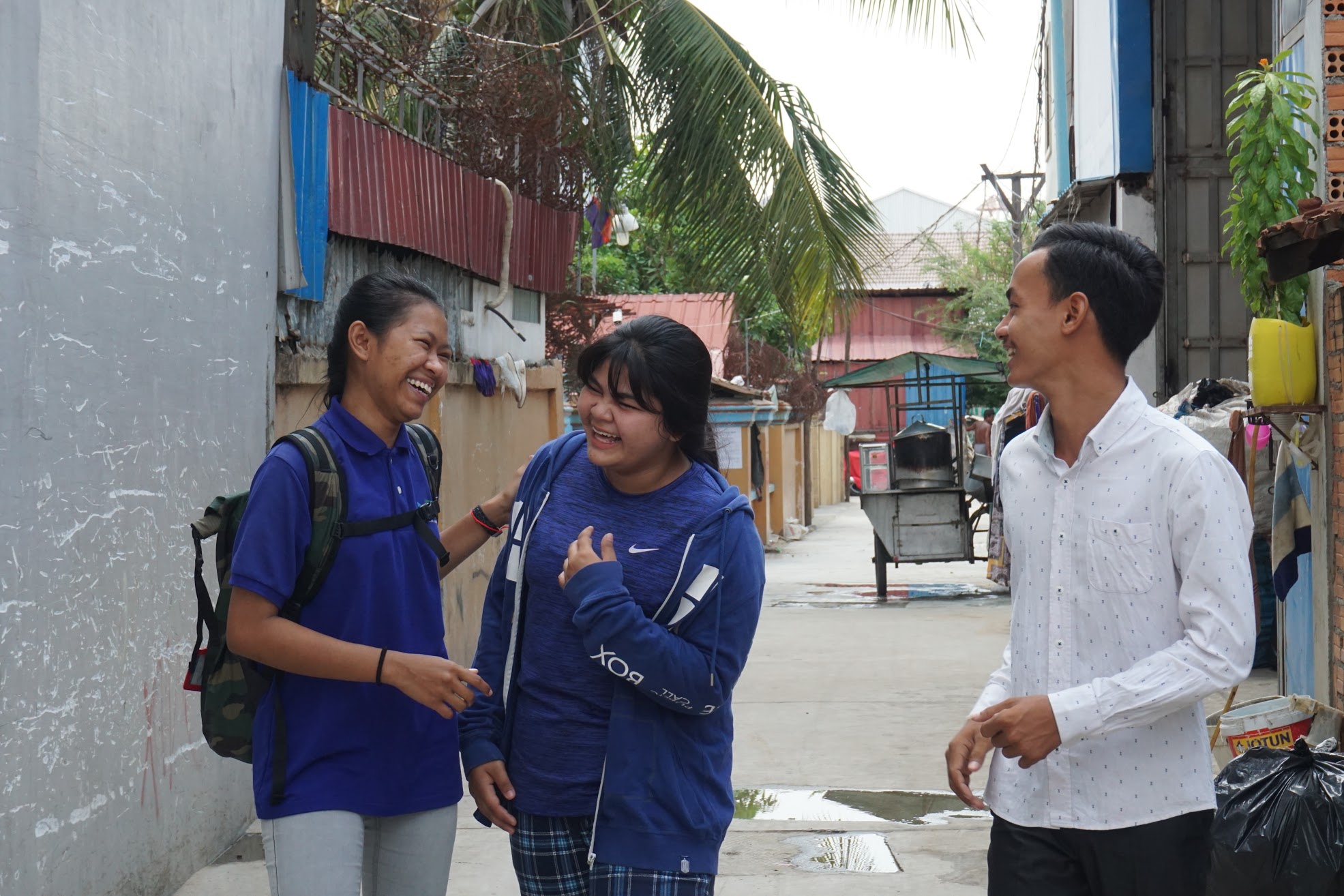 As I watch these young leaders, laughing and walking around in the community, I feel a deep sense of humility and pride. They have the potential to be tomorrow’s leaders, guiding their communities and generation towards the better future that they dream of.