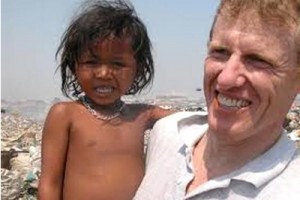 Scott Neeson was the movie chief who masterminded the marketing of hits such as Braveheart, X Men and Titanic. But in 2004 the Edinburgh-born film executive turned his back on a million-dollar salary at Sony Pictures to establish a charity that supports vulnerable children. Mr Neeson set up the Cambodian Children's Fund (CCF) with funds from the sale of his £2 million Los Angeles mansion, his 36ft five-berth yacht and his Porsche. Only recently, Mr Neeson parted with the last of his assets – a BMW he had in storage in Los Angeles. But he is now celebrating after director Roland Emmerich, who made Independence Day and The Patriot, raised more than $1 million (£650,000) for the charity in one evening at his Hollywood Hills home. And US television mogul Sumner Redstone has pledged more than £300,000 to CCF to establish a child-protection unit to assist abused children, many of whom are targets of sexual exploitation and forced labour. Mr Redstone, boss of Viacom/CBS, has over the years given a total of £2.6m to the charity, and other Hollywood contacts have also helped. One of Mr Neeson's closest friends, actress Heather Graham, is a patron of CCF. Hugh Jackman, star of Les Miserables and Wolverine, is also a backer, and Meg Ryan has visited the charity's base. During his Hollywood career, Mr Neeson rubbed shoulders with stars such as Mel Gibson, Tom Cruise and Harrison Ford, and oversaw the release and marketing of blockbusters including the Star Wars prequel trilogy and Independence Day. Sean Connery used to retreat to his offices to read his golf magazines. But Mr Neeson swapped California for Cambodia after he was shocked by the sight of children foraging amid the piles of rubbish in Phnom Penh's notorious garbage dump Steung Meanchey. It was home and workplace for several thousand of the region's most impoverished children who picked through the rubbish to find recyclable materials they could sell for a few pennies. Mr Neeson first visited the region when he had a five-week break after leaving his post at 20th Century Fox International and before joining Sony Pictures. After his visit he pledged to return and a year later he quit Hollywood to move to Cambodia. He said: "We now have 380 full-time paid staff, all but five of them Cambodian. The average monthly salary is about £60 so we can just about cope. Many of the children we have helped later return to us to be teachers, childcare workers or counsellors." Mr Neeson said he pines for Scotland but no longer has the time nor resources to visit his homeland. He spent the first five years of his life living with his Scottish parents Colin and Betty in Edinburgh's Gracemount before they emigrated to Australia in 1964. He said he used to return to Scotland every 18 months or so until the charity took over his life.