Dennis Snyder first began sponsoring a CCF child in 2012. He recently sponsored a fourth student and says he loves them all as if they were his own children

Dennis Snyder has never had children of his own. Life - his own charity and career - consumed all his time and energy. He is, however, a stepfather to a beautiful 15-year-old girl who has brought him a lot of joy. And then there are his 4 Cambodian ‘children’, the CCF students he sponsors through our dedicated Sponsorship Program. Dennis considers his CCF brood - 2 boys and 2 girls - as very much part of his ‘family’ life. “I love them as if they were my own. And I tell them that, I can’t tell them enough,” says Dennis, 60, from Massachusetts in the United States. 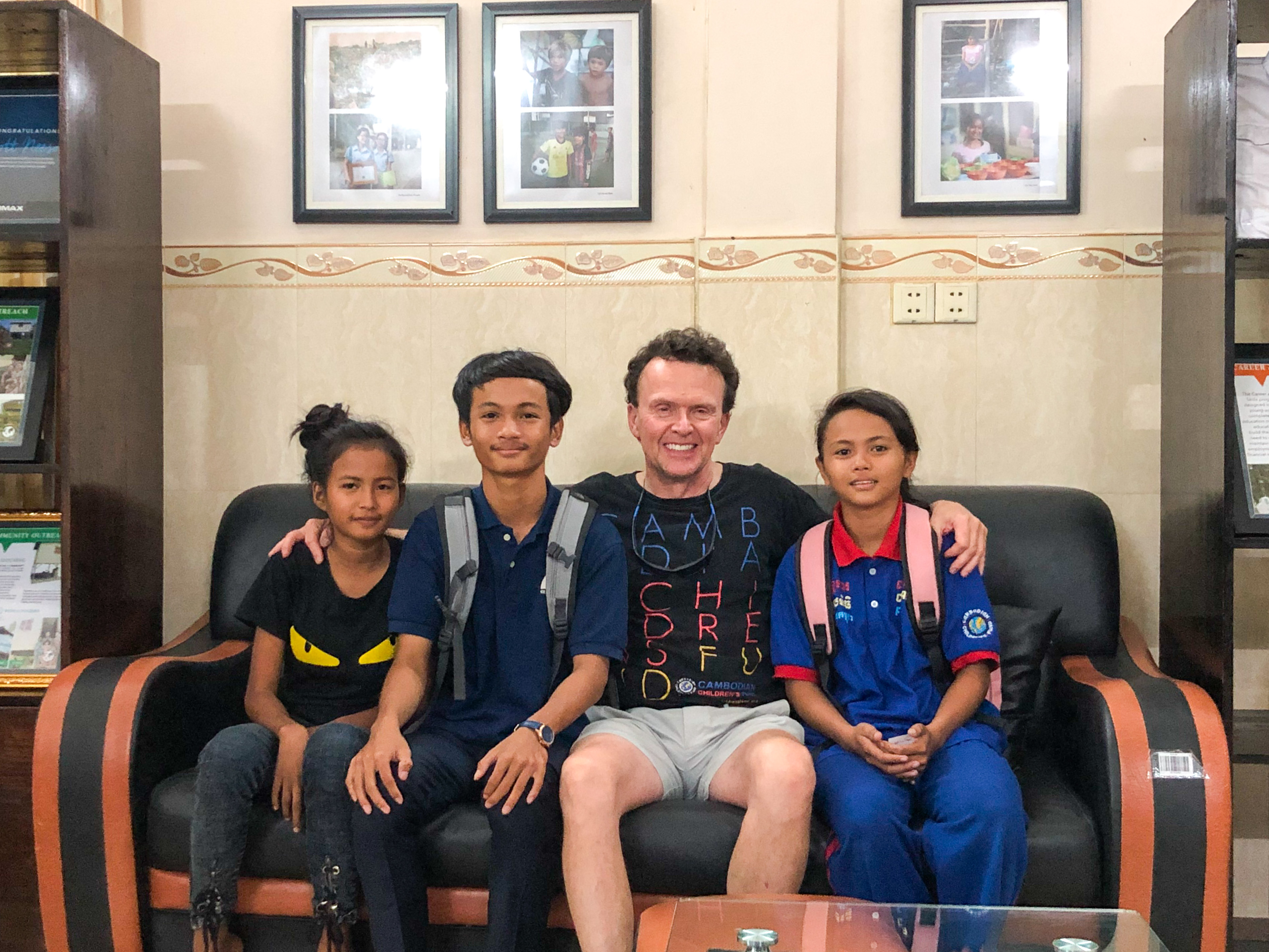 He chose to sponsor a fourth student, a 19-year-old student studying at CCF’s high school, the Neeson Cripps Academy, while on a visit to see his three other sponsored children (a 15-year-old boy and two girls, both 14) last month. Dennis, a qualified doctor, was drawn to Cambodian Children’s Fund after hearing about founder Scott Neeson’s story from friends, and immediately identifying with the mission to help needy children. “I run a charity also. We have surgical teams that go all over the world operating on children with birth defects - this is our 28th year - and this [CCF] sort of fit really well,” says Dennis, an ENT specialist. “I had never heard of CCF until I met Scott, Which was by complete luck. He [Scott] was rather shy but his friends that were there told me all about it [CCF], so I came and visited and I was just taken so much that I took on one child and then two and three.” Dennis says it can be difficult to comprehend the need of the children and families who CCF work with in Steung Meanchey, one of the most impoverished parts of Cambodia, where the deprivation can be overwhelming. “I think it’s very hard at home to impress on people what poverty here is, as opposed to what poverty is in Los Angeles or Boston or New York or Miami. “It’s completely different. These children here [in Cambodia] are targets, they would disappear into the abyss and they still can. And I pray every night for them.” Dennis’ first sponsored child, Sovannry, chose to leave CCF’s program. In January 2013, Ratha came into his life, followed by Srey Lak in August 2014 and Ratana in December 2016. Earlier this month, Oem Por, a Grade 12 student, joined his ‘family’. “It’s been a blessing for me, really,” says Dennis. “They have sort of taken a part of my life that had not been fulfilled. I think of them constantly and I know that they are in a great place.” Dennis has seen firsthand how making a difference can change a child’s life forever. Being founder and Chairman of the Board of Medical Missions for Children (MMFC), a non-profit organisation, gives him a knowledgeable perspective on the impact of CCF’s work, allowing him to connect deeply to the children. “I try to never forget where these kids came from. Where they were from, what their life was going to be’ he says of CCF. “In the United States, there are of course stories of kids coming from abject poverty and doing great things and this is amazing but these kids [CCF] had zero chance, they had no chance. They were in the most destitute situations and to think that you are a part of them having a life of hope and fulfilment and where they can contribute, is amazing. “They have nothing and you can change their lives in a way that you can only understand if you are there. You have got to come and see it.” Dennis has visited CCF around five times and intends to visit his sponsored children at least once a year, building on the emotional bond forged through emails and Skype calls. “It’s amazing to see them growing. It makes my heart sing,” he says. “Just to see what will they do with their lives. Will they be teaching, in education, will they also be parents, or will they be working the land, will they be engineers, or a physician or a dentist? I want them to dream big.” When asked what he can give the four Cambodian children who live 13,800km away but have captured his heart, he answers: “Certainly that I love them and secondly, I try to lead by example. “But I get so much from them. You receive far more than you give.” * Find out more about CCF’s Child Sponsorship Program by clicking here Kate Ginn/CCF