In the 800 or 900 years since it was built the 216 faces of the amazing temple of Bayon, one of the most famous temples of the Angkor Wat complex, have been witness to many an impressive happening. They will have gazed at the arrival of Kings and parades of soldiers, they will have felt the delicate touch of incense smoke and heard the murmur of prayers from supplicants. But it is probably safe to say that in all of those 10,000 or so months, not one of those faces has ever seen or heard a monkey-dance hip-hop routine. Their first encounter with that show-stopping, roof-raising form of entertainment came courtesy of the boy monkey dancers from CCF. Honoured and thrilled to be invited to perform alongside the professional dancers of the Royal University of Fine Arts, the dozen CCF boys and supporting staff travelled to Siem Reap, their base for 2 nights of performance and a day spent exploring the temples and enjoying the delights of the nearby Kulen Mountains. On performance days rehearsals and readying took up the afternoons and early evenings. As the twilight turned the temple and its unique silhouette into a shadowy mass, golden lights and candles transformed it into one of the world’s finest backdrops. First the Royal University company brought stately dances from the past to gentle life before the hundreds strong audiences. International singers next added their latter-day melodies as the darkness deepened and a mood as soft as the night prevailed. And then, scampering between the tables and bringing a ripple of gasps and surprise with them, heading stagewards, came the monkey boys. Immediate applause followed them. Tables were abandoned, cameras seized and the immediately engaged diners surged forward for a better view. And what they saw on the stage were the traditional steps, the monkey antics that had entertained generations and now entertained them. They watched, rapt, as the notes from the traditional instruments and the music of times past echoed off the ancient building’s facade. And then, suddenly, came the music of time present. The first strains thundered out. ‘’We Will Rock You!’ declared the booming song, and the boys slid into their hip-hop variation and did precisely that. Backward-flipping, cavorting, leaping, criss-crossing, interweaving and clearly thoroughly enjoying themselves they made the stage and the night their own as the thumping strains surprised the solid statues above them. The dancers’ sheer exuberance as much as their skill held every eye and brought ever louder applause from scores of delighted watchers. As the music ebbed and faded away the boys took their bows, the cameras flashed and the appreciation filled the air. For everyone concerned, these were nights to remember and it’s very possible that even up in the dark, the stone faces were smiling. 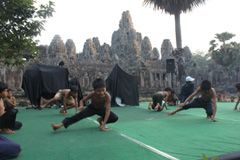 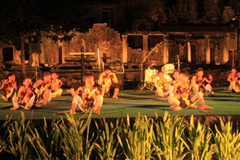 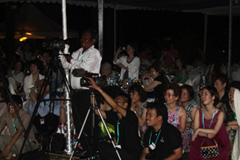 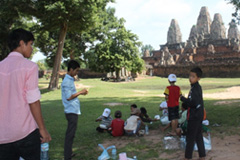