A few months ago CCF was invited to contribute a piece to the Lakhaon (Drama) International Festival of Culture 2009, a major arts event supported by the French Cultural Institute. The venue for the Festival was the Chenla Theatre. Recently fully renovated and with seating for 600, the Chenla is Phnom Penh’s and Cambodia’s most prestigious arts venue. Under the direction of Soung Sopheak, CCF’s Head of Arts and Drama, CCF’s dramatists rose to the challenge and their performance of Daylight’s Darkness, effectively a dramatization of the lives many of the actors themselves once led, was stark and effective. As the full house audience gathered and took its seats they could not fail to be struck by the looming bulk of the open stage, its refuse piles, feeble shack and rusting drums, and the sense of eerie menace which leaked from it and seeped, like the producer’s artificial smoke, across the auditorium. All that seemed to be missing was the reek and nose-stinging stench of the real thing, sitting a scant few kilometers away from the performers and their relaxed spectators. The audience didn’t stay relaxed for long. A procession of shaded, shabby figures, shoulders hunched from hopelessness and the weight of dragging a living from the detritus of one of South East Asia least rich cities, materialized on stage. Each addressed the audience directly and told his or her story, bitterly lamenting the fates which had brought them to this place and this pass. Then, shuffling and snuggling into the debris, they re-enacted what had once been their own lives when they sought sleep among trash and rats. A video backdrop heaved the nightly roar of dump truck engines, the glare of their lights and the threat of their bone-crunching wheels from their memories onto the stage and the silence which followed their departure brought not peace but war as the group squabbled and made up and fought amongst itself as the evil night passed. Daylight brought no warmth to the scene but only the prodigal return of a lost parent and the officious maraudings of unsympathetic officials, an event which brought some humor to enliven the darkness of the theme and bring a touch of joy to the cracked existences on display. There was no joy in the finale however, when the errant, remorseful parent died alone and the child scavengers returned to find yet another light, however unreliable, extinguished in their lives. It was not a performance that can easily be forgotten. 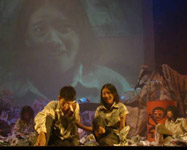 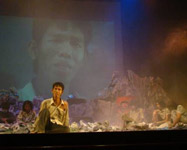 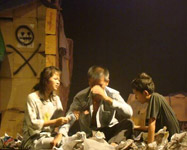 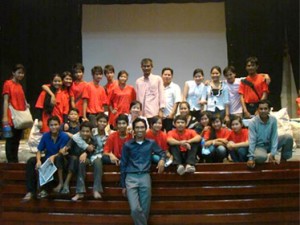 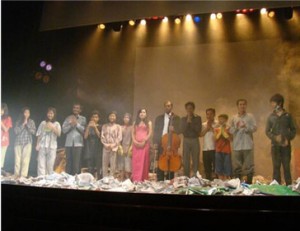