Robert and Beth were clearly finding it hard to take in that they were actually in Cambodia and actually in CCF and that the person in front of them, lively, healthy and shining-eyed with her own delight, really was the girl they had sponsored so long ago and that they had waited so long to meet. But they were there and the moment was as real as the people around them, but it still wasn’t easy to absorb. Had they been planning the trip for long? “We’d always been saying that we’ve got to go one day, but we never did it,” said Beth. “It was our sons,” added Robert. “We were saying again that we’d love to go and they said, ‘Look, do it. It’s December now, so do it in December.’ And here we are.” Five years previously they were far away, listening a friend, Scott Neeson, tell them about his hopes and plans around doing something real, something positive and long-lasting for the children he had encountered in Phnom Penh, primarily children of the dump, whose plight and likely fates had so shocked him. “You can count on us,” they told him. So he did, and they became the founding members of CCF’s robust and unique sponsorship Scheme out - Program, a scheme which now encompasses over 450 children and which has enriched the lives of sponsor and sponsored alike. And now, 60 months later, they were on their first ever visit to Cambodia for the best reason they could imagine – to meet and share time with their sponsor child. In the days that followed, accompanied in the latter part of their visit by the 2 sons who had played such a key part in the process, they got to know Srey Mon’s routine and how she lived and studied in CCF. They met her friends and, accompanied by CCF staff, took her and some of them out to a local market, an experience they will forever remember. On their final evening, the family joined in Srey Mon’s evening modern music class where Robert displayed his drum and keyboard skills to an enthusiastically impressed – if mildly surprised – audience. But all things, good and even better, come to an end. When the door closed on the lesson and the visit alike it did so to cheers and farewells that must have resounded through the building. “We’ll be back,” was the family view as they stepped into the road. And they’ll be welcome 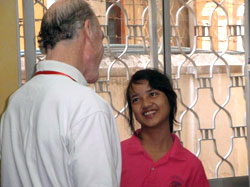