CCF Students Strike it Rich at the Summit

If any of the little girls who slaved and scrambled over the stinking garbage on the Steung Meanchey rubbish dump ever looked up at the planes that passed high above their heads, few if any would ever have thought that one day they might be on one of those impossible machines. Four such girls, CCF students all, recently made that transition and visited mystical and mythical land of the USA as CCF delegates to the Anthony Robbin's Foundation's Global Youth Leadership Summit. For the third year in a row, CCF youngsters whose lives before CCF had held nothing but hardship and hopelessness, were thrilled and delighted to find themselves taking part in a major international youth event. There, true to the traditions set by their CCF predecessors in 2008 and 2009, they learned much about the world, a lot about themselves and made a real impact on those around them. Srey Leak returned determined to help her friends realize that they must love themselves before others will love them, and we must not prejudge ourselves. Don't be shy, is her message to them, ask questions when you have to, don't lie to yourself and others. "Nothing," she now says, " is impossible and Impossible is nothing". Sreythea's summit experience showed her that we must have plan for anything we do and not be afraid of any failures. If it's not working, find another way. Now the lights of her learning in San Diego's University has faded her old shyness and she has made up her mind to help CCF by helping her fellow students solve any problems that they might face and she can help with. Srey Pouv 's revelation was the power of self-confidence in action and now she believes that self-esteem is the number 1 key to success. "Have confidence," is her post-summit motto. The saying that "Winners never quit and quitters never win," struck a real chord with Srey Nich and is a maxim that she now holds close to her heart and that she intends to cherish for ever onwards in her own life. Srey Nich had a particularly profitable encounter with fate when, after being selected for an on-stage experience, she had the chance to spin a Wheel of Fortune. Fortune smiled and rewarded her with a $100 Gift Card. But the greatest rewards came to the girls as a result, not of luck, but of effort and sheer ability when, at the end of the summit, the most successful teams were nominated and awarded. Srey Leak's team gained the Silver place and Srey Nich's took the Gold. But these were far from the greatest gains. For all of them it is safe to say, their greatest prize is the knowledge that they, from the bleakest of backgrounds, could climb to the very peak and find success at the summit. They did themselves, and CCF, proud. 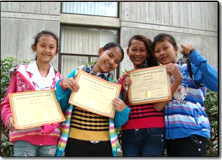