CCF Rated as One of the World's Best Charities

UPDATE: Cambodian Children's Fund has since been re-assessed and has been upgraded from 99.25% to 100%, placing it in the top 1% of all charities. See full news story here. The world's two largest platforms for evaluating charities both agree - CCF is among the best charities in the world when it come to financial management, accountability and transparency, and the feedback from hundreds of sponsors, donors, volunteers and visitors.

Charity Navigator - What the experts think.

CCF has received the highest rating of 4 out of 4 stars for 6 consecutive years from Charity Navigator, which ranks CCF as an "exceptional" organisation that "exceeds industry standards and outperforms most charities in its cause". In 2014, Charity Navigator introduced a rating score out of 100, and CCF recorded a score of 99.05 in 2014 and 99.25 in 2015. We have also recorded a perfect score of 100 for accountability and transparency. This puts us amongst the most effective organisations in the world, and confirms what everyone at CCF knows - we are one of the best charities anywhere! Unlike GreatNonProfits, which is based on reviews from the general public, Charity Navigator examines CCF financial information and evaluates the organisation according to a strict and extensive list of criteria. "We rate charities by evaluating two broad areas of performance; their Financial Health and their Accountability & Transparency. Our ratings show givers how efficiently we believe a charity will use their support today, how well it has sustained its programs and services over time and their level of commitment to being accountable and transparent. We provide these ratings so that givers can make intelligent giving decisions, and so that the philanthropic community can more effectively monitor itself." - Charity Navigator website. We encourage all donors to do their research on Charity Navigator before donating to a charity. 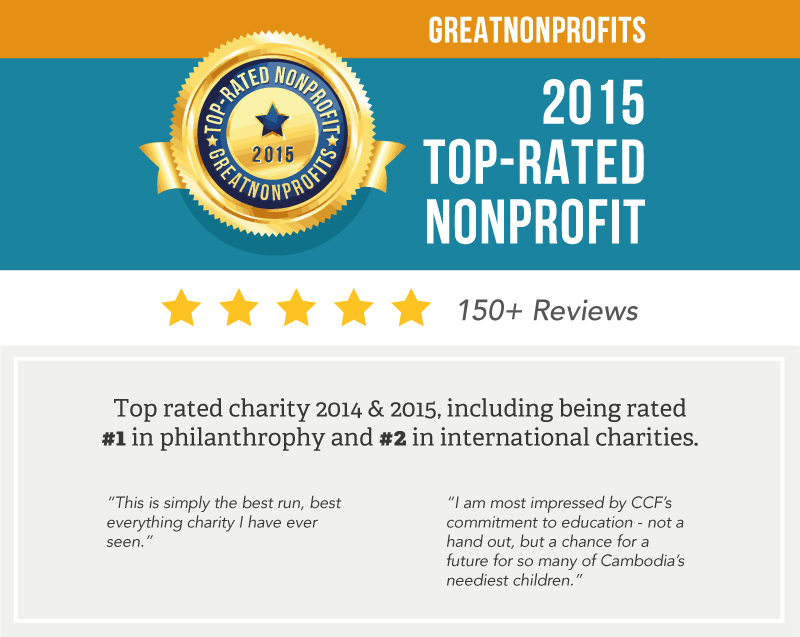 GreatNonProfits - What the public has to say.

The votes are in, and it’s great news - CCF has been named one of the Top Rated not-for-profits for 2015 on GreatNonprofits! For two years running, CCF has been acknowledged by GreatNonProfits as a 'Top Rated Nonprofit'. We've even held the amazing position of being the #1 rated in the philanthropy category and #2 in international charities. GreatNonprofits is the leading online platform for community-sourced stories and reviews about nonprofits within the United States and internationally. The Top Rated 2015 award is a people’s choice award where volunteers and donors cast their vote in the form of a review, with the best reviews winning nonprofits a spot on the prestigious GreatNonprofits Top-Rated Nonprofits List. Any nonprofit that gets 10 or more 4- or 5-star reviews and maintains an overall average of 3.5 stars, receive a GreatNonprofits Top-Rated award. CCF has amassed an incredible 150 5-star reviews. Throughout 2014, CCF received an overwhelming number of positive reviews from enthusiastic sponsors, as well as volunteers and donors who had spent time at CCF. Here are some of the reviews submitted about CCF: “One cannot begin to describe the impact this organisation has on the lives of thousands of people. Whether it is the personal "mentoring" sponsors have with their kids, or the societal impact from the medical and vocational centres. CCF is an example of dedication, professionalism and transparency.” Guchts - CCF sponsor for six years “This is truly a hands-on organisation where no resources are wasted, and each child is treated as an individual who deserves to be given every opportunity possible to effectively take charge of his or her life.” Susan Pasley - donor, sponsor and volunteer “From this experience I have to say that beyond the obvious sophistication and thoroughness of the CCF’s approach to the work being done, it was the palpable organisation-wide dedication to the core mission of creating brighter futures for the children of Cambodia - above and beyond standard job tasks, obligations and day-to-days - that struck me as the secret ingredient to the success of a special group of people.” Joel - former volunteer “I have sponsored a kid for many years and couldn’t be happier about how he’s progressing and seeing how CCF is broadening its scope with new projects.” Iggy - Sponsor A huge thank you to all our donors, sponsors and volunteers for your reviews and support throughout the year. You’ve put your trust in us and we couldn’t do it without you. Thank you for trusting CCF, for believing in the work we are doing, for donating and volunteering your time.