Read the full article here. There are now 300 small homes on a stretch of land alongside the old garbage dump in Stung Meanchey, which closed in 2009, that provided a living for scavenger families. An additional 41 houses were officially opened in Russey village yesterday, built by the Cambodian Children’s Fund (CCF) in cooperation with the organization World Housing. 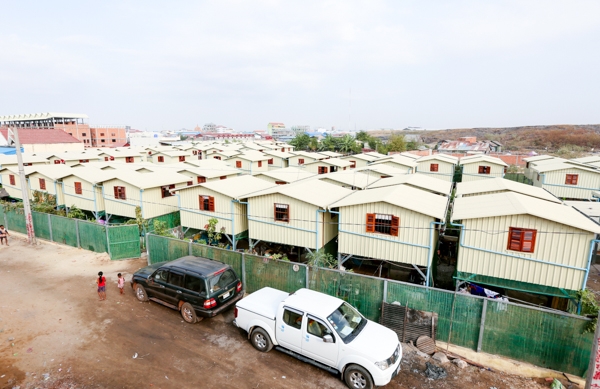 Scott Neeson, founder of CCF, said for many of the families living in the modest homes, it is the first time they have ever lived in a house with security, washrooms, hygiene, and a clean environment. In addition, these homes are keeping families together, providing opportunities for poor children to live with their parents, he said. To live in these Khmer-style, four-by-four meter homes on stilts, the families pay only for their water, electricity and a land rent of $15 per month, according to CCF’s Tiang Sotheara. But they also must follow a protocol set by CCF. “Parents must promise that their children will go to school regularly, and there must be no violence in the home or conflict with neighbors,” he said. “We have CCF officers visit the community regularly to check on the families and see whether they follow CCF’s policy or not,” Mr. Theara said. “If any families are found in violation, they will have to move out.” Each house costs $2,600, Mr. Theara said. Steel pillars support the house, with zinc sheeting used for the walls and the roof and wood for the floors. Every home has a garden plot in the back for growing vegetables. The community is surrounded by a wire wall, and there is a playground in the center for all of the children. Vong Sotr, Minister of Social Affairs, Veterans, Youth and Rehabilitation, presided over the opening ceremony yesterday and said the CCF’s housing assistance is a welcome addition to the government’s efforts to help impoverished people. Ouk Heang, 57, and his six children are among the families living in this new community. While sitting comfortably under his new family home, he told Khmer Times that his family’s living standards have improved since moving in and he is paying less. He is also compliant with the CCF living conditions that come with the opportunity to live in the community. “If we commit violence in the family, they (CCF) will force us from the house,” Mr. Heang said. Mr. Heang said his family moved from Prek Toal village, Siem Reap province eight months ago, and CCF offered to help because of the bad living conditions his family was experiencing. Founded in 2004, CCF has built more than 400 houses for impoverished families in Phnom Penh, Kandal, Prey Veng, Kompong Thom, Kompong Chhnang, Siem Reap and Battambang provinces.